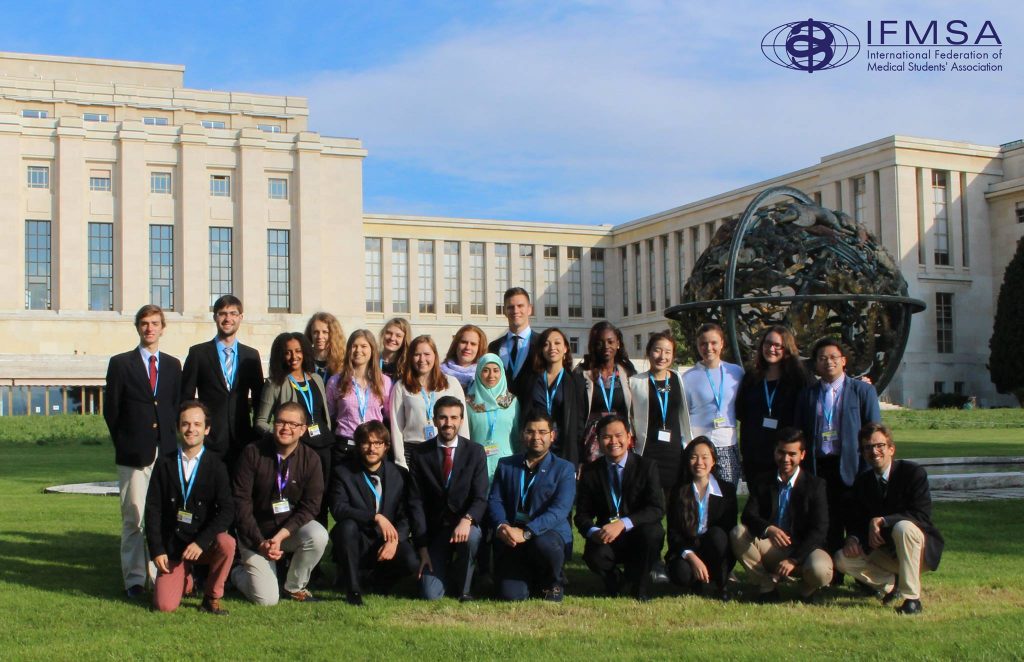 May 26th 2015, Geneva – As the 68th World Health Assembly comes to its end, the International Federation of Medical Students Associations (IFMSA) welcomes the progress made in health globally and appreciates the commitments made by member states on the several agenda items. The Federation, a network of over one million medical students in 119 countries, was represented by a committed delegation of over 35 young advocates with the objective of voicing out the priorities of health students worldwide.

The voices of medical students, and of youth more generally, has been recognized several times during this World Health Assembly. Addresses by Dr Margaret Chan, Director General of the World Health Organisation, and references made by numerous Ministers of Health or their representatives, have shown the crucial role that future health professionals play in shaping the global health agenda.
– Agostinho Sousa, IFMSA President

Over the past days, IFMSA addressed the plenary on the following agenda items:

Additionally, two policy briefs were produced by IFMSA and distributed to delegates:

All statements and briefs released by IFMSA are available online at www.issuu.com/ifmsa.

Additionally to an active presence in the plenary, the delegation of IFMSA participated in several side-events organized in the margin of the 68th World Health Assembly. The Federation intervened notably in the Technical Briefing on Climate Change and Health, demanding that decision makers negotiate for policy measures which address health and well-being in the UNFCCC processes. In that spirit, IFMSA welcomes the adoption of the resolution on air pollution as an important step toward the creation of healthy environments.

As the doctors of tomorrow, we are deeply concerned about the unhealthy environments in which our future patients are most likely to live in, if no ambitious actions are taken today. Ahead of the defining expected climate agreement in Paris, the Resolution sends a strong message that environment and health are tightly linked. – Arthur Mello, IFMSA Liaison Officer for Public Health Issues

Furthermore, medical students were publicly thanked by Health Ministers for their proactive response to the Ebola Outbreak, and the initiatives they have led in the local communities. IFMSA welcomes the recognition from the WHO of the role of youth on the tackling of crisis, majorly as part of first responders. IFMSA established this commitment long time ago and will continue to remain active. The Kick Ebola Out Campaign organized by our members from Sierra Leone and Guinea is one of the best examples on how medical students can engage the public through health education and sensitization programs and support the WHO Emergency Workforce.

IFMSA has expressed its commitment to participate in the discussions related to the creation of a Global Strategy on Human Resources for Health so that the health workforce is adapted to the current and future needs of populations around the world.

Moreover, a youth engagement strategy is being developed by IFMSA in collaboration with the WHO and other youth organizations to ensure that adolescents and young people are fully involved in shaping and implementing the framework. There is also a commitment to increasing youth capacity to advocate for development and implementation of effective policies and programmes for adolescent health in countries, and strengthen data relevant for the health of adolescents.

IFMSA strongly welcomed the landmark resolution on antimicrobial resistance. As future healthcare professionals, we face the risk of losing essential drugs to treat otherwise curable diseases of patients under our care. Not acting now means we have failed our patients throughout their life course. Antimicrobial resistance is a generational issue. states Arthur Mello, IFMSA Liaison Officer for Public Health Issues.

As Dr Margaret Chan has recalled it, medical students are the next generation. [The world] depend on [us]”. IFMSA is looking forward to continue engaging with the World Health Organization to tackle some of the most pressing health issues of the today. The Federation commits to pursue its collaboration with multi-sectoral actors so to shape a healthy and sustainable future.

About IFMSA
The International Federation of Medical Students Associations (IFMSA) envisions a world in which all medical students unite for global health and are equipped with the knowledge, skills and values to take on health leadership roles locally and globally. Founded in 1951, IFMSA today represents a network of 1.3 million medical students through its 125 national member organizations. For more: www.ifmsa.org.