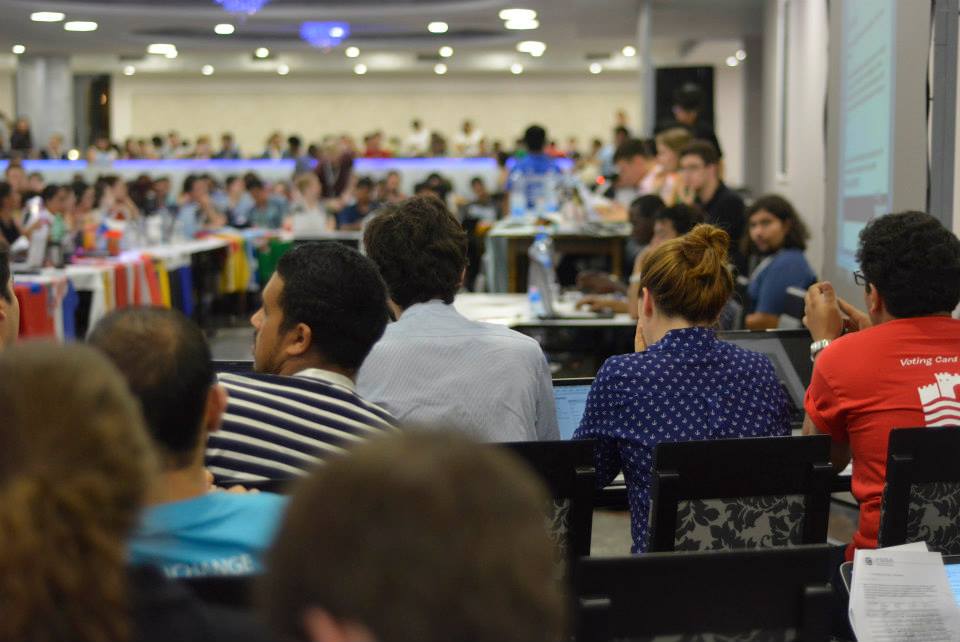 Amsterdam, The Netherlands – The 64th August Meeting General Assembly of the International Federation of Medical Students Associations (IFMSA) has ended a few days ago. The meeting – which welcomed over 750 students from above 100 countries – took place in Ohrid, Macedonia under the theme of Migration of Health Workers.

The opening of the General Assembly was marked with the historic launch of a new online platform for IFMSA, which can be visited at www.ifmsa.org. The opening ceremony also welcomed an address by the United Nations Youth Envoy, Ahmad Alhendawi, who stated his appreciation of the work done by IFMSA in the process of the sustainable development goals and the definition of the post-2015 agenda.

The Federation also adopted a new set of Constitution and Bylaws, which guide the Federation internal work after an extensive review process. This aligns with the transition to the new structure of the Federation to better match the needs and priorities of medical students worldwide.

In regards to policy, eleven (11) new policy statements were adopted and/or renewed. Those include, but are not limited to the following topics: control of emerging infectious diseases, global road safety, environmentally sustainable healthcare facilities, hazardous and harmful use of alcohol, non communicable diseases, post-2015 future development goals, tobacco control, universal health coverage, trade and health. Those policy statements will support IFMSA global health advocacy in the highest levels. They will shortly be available online at www.ifmsa.org.

To support medical students initiatives, the Federation has doted itself of ten (10) new programs, complementing the first set of programs adopted during March Meeting .Those programs addressed issues that are seen as important for medical students: children health and rights, communicable diseases, environment, ethics and human rights, health systems, HIV/AIDS and other STIs, human resources, mental health, sexuality and gender identity, and gender based violence.

Additionally, the meeting allowed national member organizations to elect the next Team of Officials, who will lead the Federation in the term of 2015-2016. IFMSA would like to thank all candidates and wish best of luck to the newly elected officials. IFMSA would also like to congratulate Dr Emily Spry, for her election as honorary life member. During her term as IFMSA President in 2003-2004, Dr Emily Spry increased the reach of IFMSA at the external level, providing numerous new opportunities for medical students. She lead the redaction of the first IFMSA Strategic Plan, has set the bases of the training division and has served on the Supervising Council for four consecutive years.

IFMSA-Mexico has been elected as the host of the 65th August Meeting General Assembly to take place in Cancun in August 2016.

The meeting has also allowed professional and research exchanges officers to sign over 13.000 contracts in approximately 100 countries for the next season. IFMSA exchanges favours intercultural understanding and allow medical students to explore health care delivery and health systems in different social and economic settings. Topics-based sessions were also held in the fields of public health, sexual and reproductive health, medical education, and human rights and peace.

Finally, IFMSA would like to sincerely thank the Macedonian Medical Students Association (MMSA) and the Organizing Committee of August Meeting General Assembly 2015 for their efforts and dedication to make this event a memorable success.

About IFMSA
The International Federation of Medical Students Associations (IFMSA) envisions a world in which all medical students unite for global health and are equipped with the knowledge, skills and values to take on health leadership roles locally and globally. Founded in 1951, IFMSA today represents a network of 1.3 million medical students through its 129 national member organizations. For more: www.ifmsa.org.