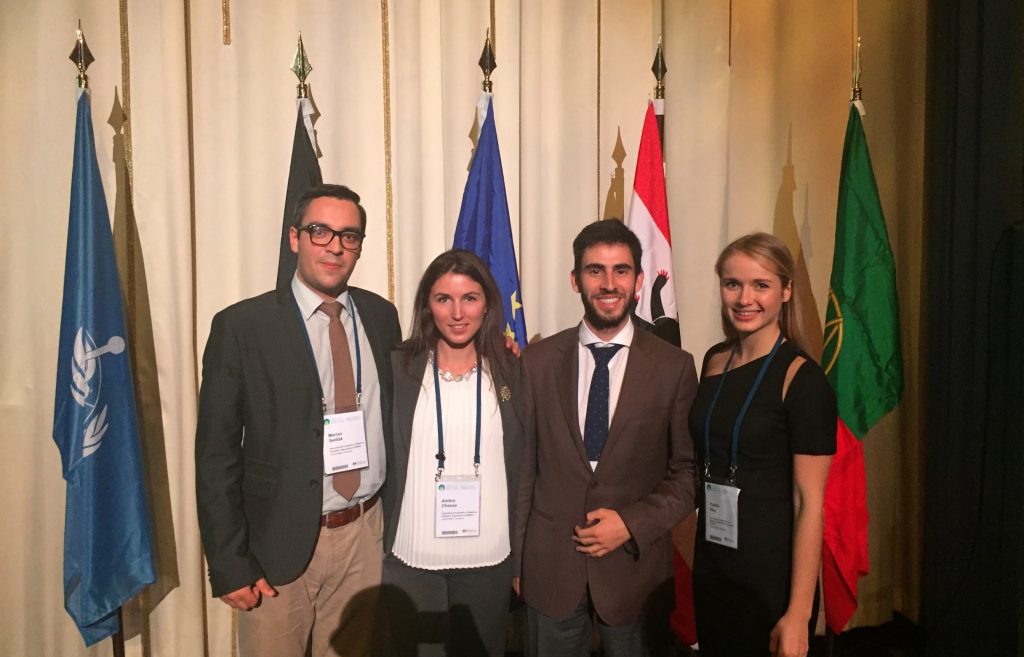 IFMSA was present at the World Health Summit 2018, which was held in Berlin, Germany, from the 14th until the 16th of October 2018. IFMSA was represented in the summit by the Vice-President for External Affairs, Marián Sedlák, and three general delegates; Ambra Chessa (SISM Italy), Jorge Cardoso (ANEM Portugal), and Caitlin Pley (SFGH UK).

The World Health Summit (WHS) is a meeting place for stakeholders and decision-makers from every health-related field, providing the ideal forum for exchange with experts from academia, industry, politics and civil society. This year WHS celebrated its tenth edition, with an estimated attendance of about 2.500 participants and a wide range of stakeholder groups from all over the world. As previously, the event took place in the German capital, Berlin, and was held under the high patronage of Angela Merkel, Emmanuel Macron and Jean-Claude Juncker.

Honoring its commitment to Meaningful Youth Participation, IFMSA took an active role in discussions related to global health, UHC and empowerment of under-represented voices in the health sector, as well as a range of other topics in accordance with IFMSA’s Global Priorities (GPs). We took the opportunity to engage with other organizations, exploring new alliances and reinforcing the voice of medical and health students.

The summit included many interactive sessions, workshops, and panels that tackled important topics related to global health. The central topics of the summit included: pandemic preparedness, health in all policies, the Sustainable Development Goals, health systems strengthening, antimicrobial resistance, access to essential medicines and digital healthcare. The highlight of the event was its joint keynote – the Grand Challenges, with speeches delivered by Angela Merkel, Erna Solberg, Dr. Tedros Adhanom Ghebreyesus, and Bill Gates. The co-founder of the Bill and Melinda Gates Foundation spoke about three examples of innovation that have great potential to transform global health. Dr. Tedros, the Director General of the World Health Organization, told a poignant story of a 13-year-old boy he had met in Sudan, whose life had been saved by surgery, and how the boy’s smile had moved him to tears, thanks to a progressing UHC movement in the country. Dr. Tedros’ speech simply and effectively reminded us all that while we generally speak about global health at the population level, it is individuals, their well-being, happiness, and futures, who we are really working for. Erna Solberg, the Prime Minister of Norway, spoke largely about the nexus between gender equity and global health and emphasized the crucial importance of girls’ education in improving health for everyone and achieving the ambitious Sustainable Development Goals. Angela Merkel, the Chancellor of Germany, affirmed Germany’s firm commitment to global health, congratulated Dr. Tedros for his outstanding leadership, and affirmed health as a human right. This came in the context of recent German leadership in global health, with the launch of the SDG3 Global Action Plan (lead by Germany, Ghana, and Norway), and the announcement by Jens Spahn, German Minister of Health, of a voluntary contribution of €115 million to the WHO for a 4-year period. 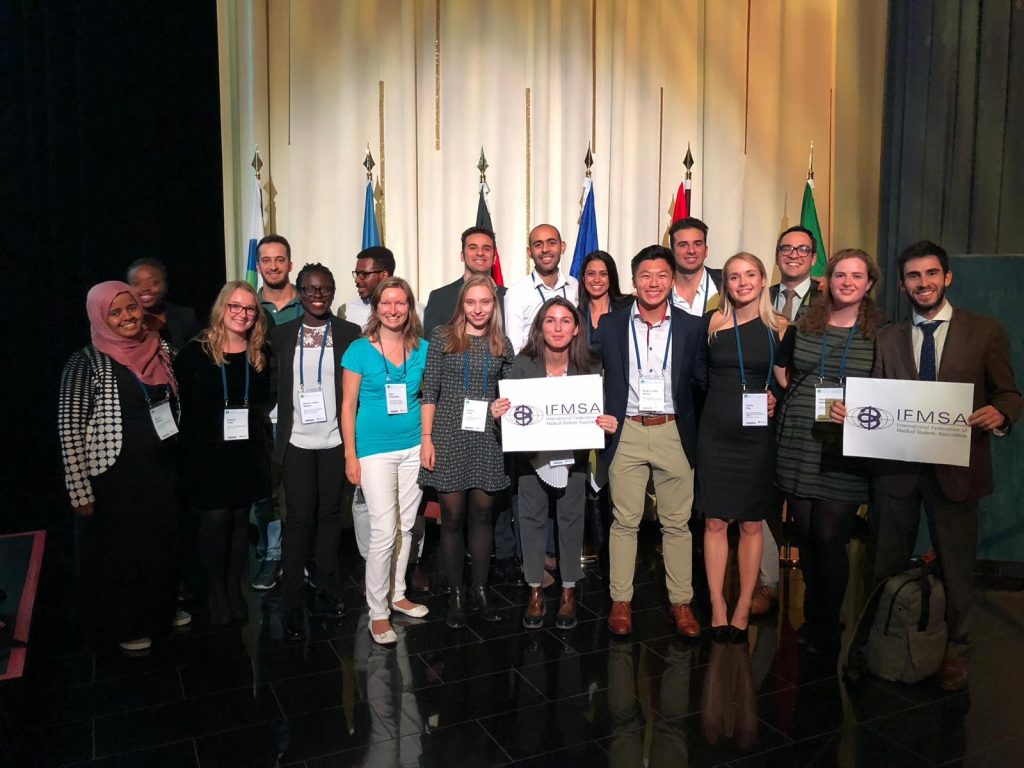 The Summit was also attended by many IFMSA members and health students from different countries all over the world. They discussed the global health work they were doing in their countries and exchanged expertise throughout the summit.

The World Health Summit is a renowned event where partners, leaders, stakeholders and advocates from all around the world meet and discuss the future for healthcare and global health. Thanks to World Health Summit’s support of IFMSA, the Federation as one of those active leaders and advocates, ensures its active participation in the summit every year and reflects the work and opinions of its 1.3 million members. 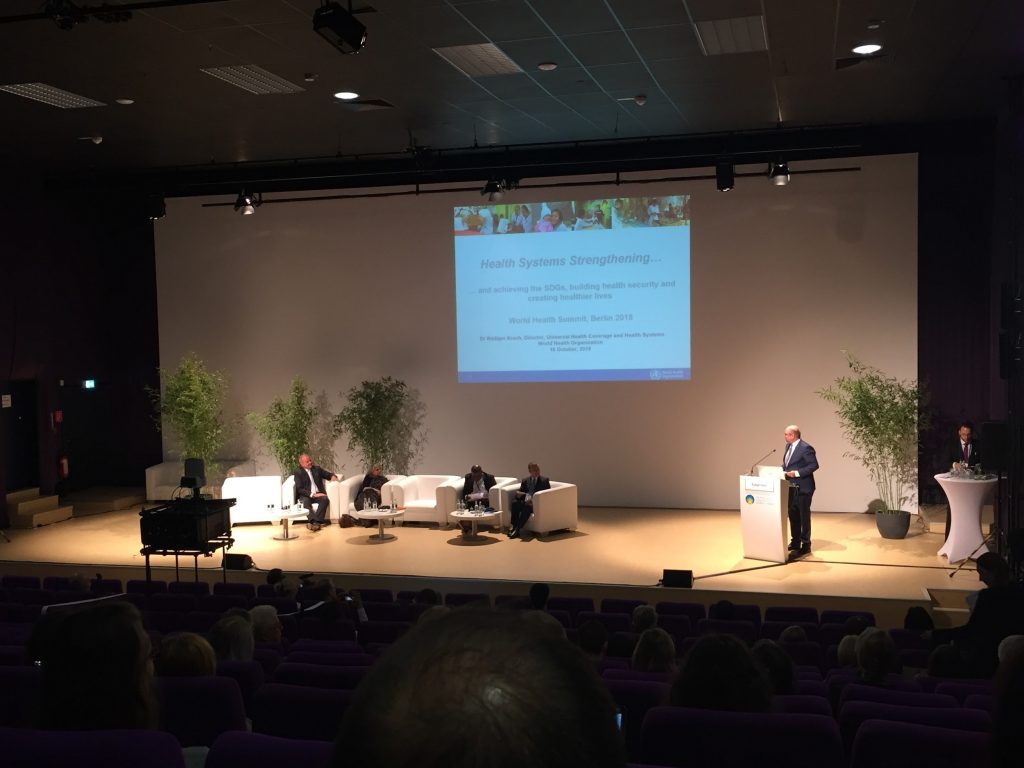 Example of a panel session of the summit.