WHO EMRO RC65 – A New Vision for the Region 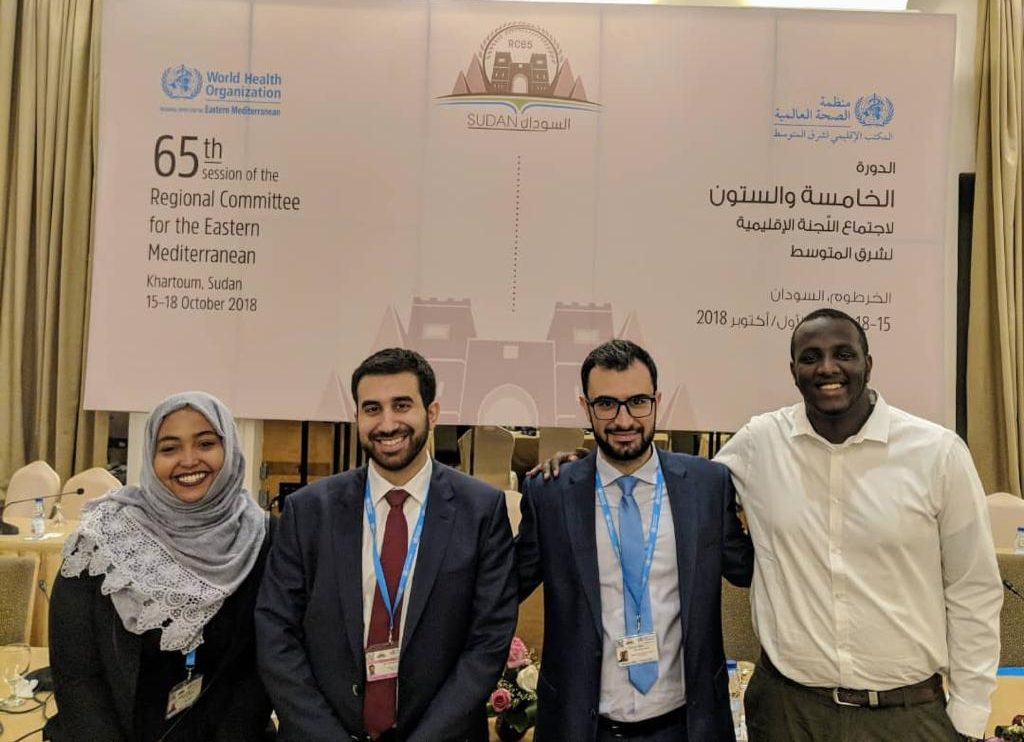 The Regional Committee (RC) for the WHO Regional Office for the Eastern Mediterranean (EMRO) is the annual meeting of Member State representatives of one of the WHO’s six regional offices. These committees address specific regional public health needs and are responsible for setting policies and approving budgets and programs of work for their corresponding regions. This year marked the sixty-fifth session of the Regional Committee (RC65) for WHO EMRO held in Khartoum, Sudan from October 15th – 18th. As a non-state actor having official relations with the WHO, IFMSA was invited to send a delegation of its own to participate in the committee’s discussions and deliberations and to provide a youthful input. IFMSA was represented by Adonis Wazir (RD EMR and head of the delegation) and three general delegates: Alaa Abusufian E. Dafallah (MedSIN – Sudan), Eltahir Abdelrahman Abdelrahim (MedSIN – Sudan), and  Kareem Makkawi (LeMSIC – Lebanon).

This year’s RC took off with an opening session held at the Friendship Hall of Khartoum’s Presidential Palace, during which newly-appointed Regional Director (RD), Dr. Ahmed Al-Mandhari, announced his vision for the EMRO over the coming years: Health for all by all. In line with WHO’s current focus on progressing towards Universal Health Coverage (UHC), the WHO’s Thirteenth General Program of Work (GPW13) and its 3 strategic triple billion goals took center stage and were at the very heart of this vision. WHO Director General (DG), Dr. Tedros Adhanom, provided his full support for this vision and stressed the importance of not only garnering political commitment to achieve key global and public health goals but also translating this commitment into tangible results.

The regular sessions of the RC then came to a start shortly thereafter at the Rotana Hotel with the RD’s Annual Report, in which he gave a comprehensive overview of the public health situation in the region, highlighting key challenges that the EMR continues to face and means of moving forwards. A number of technical papers were presented on key health issues, and IFMSA contributed with three interventions and statements on: scaling up primary healthcare (PHC) as a means of progressing towards UHC, refugee and migrant health, and access to medicines and vaccines. Our participation was highly welcomed and praised, with RD Dr. Al-Mandhari stressing the importance of youth involvement and Assistant DG for Special Initiatives, Dr. Ranieri Guerra, thanking us for our presence and remarking during the session: “Students, thank you for being here! You are the future and a benchmark for all!”

IFMSA also attended a productive panel discussion on PHC in the context of the 40th anniversary of the Alma Ata Declaration. We also attended side events on GAVI (The Vaccine Alliance), Health in All Policies (HiAP), and health financing. IFMSA was also invited to dinners hosted by the RD and by the government of Sudan, during which a beautiful cultural show marking Sudan’s diverse tribal cultures was on display.

As the session came to an end, RD highlighted that there is still some way to go in our region to achieve the 2030 Sustainable Development Goals. He hoped that the EMR’s health indicators would shift from red to green within the coming years. Our presence as IFMSA at EMRO RC65 was of paramount importance, considering that youth were minimally represented at this session. Despite the fact that youth below the age of 25 represent around 50% of the world’s population, none of the Member States present had any youth delegates or youth health professionals, and this shows that much work still has to be done in this regard in the EMR.