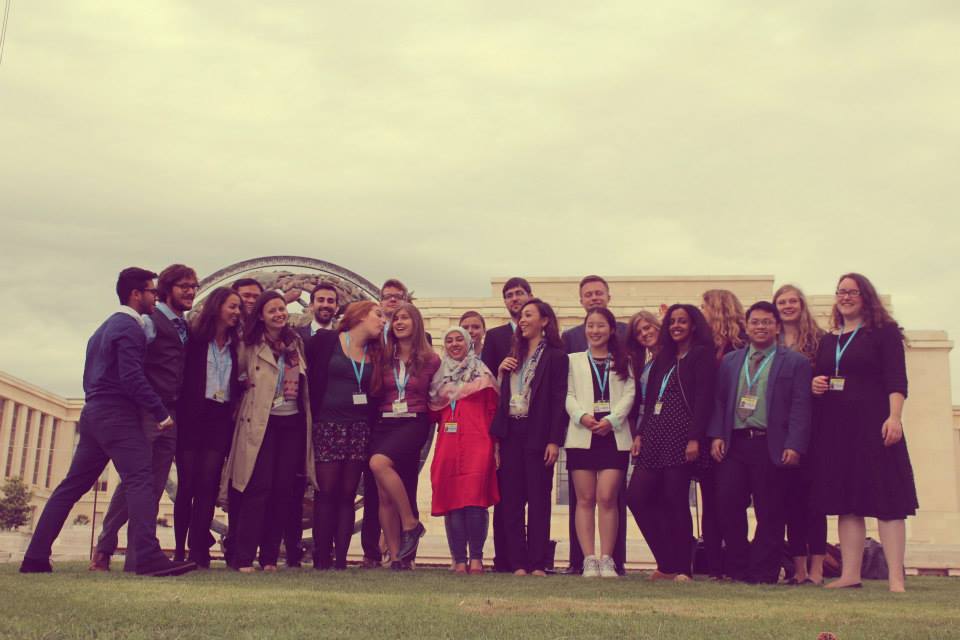 The Pre-WHA: Global Advocacy programme and the United Nations Introduction to the WHA for New Delegates was an engaging epilogue to the intentions and efforts our 35+ IFMSA delegates in the week ahead for the World Health Assembly, held at the Palais De Nations, Geneva. Despite being filled to the brim with infographics, strategic buzzwords and conversant Politikspeak, many of us were besieged by the hubbub of delegates and the relentless stream of knowledge conveyed by parallel events by Member States, WHO departments and NGOs.

The brunt our delegation come from a medical background where technical detail is our bread and butter– this week we will be thrown from our niche into an mutisectorial environment to engage the politicians, journalists and social workers of the world. The accrued efforts of our delegates elucidates the validity of a youth voice in topics of global health intervention, and we hope for a crescendo of discussions and support on the health agendas we are fighting for in the coming week. I have been inspired from Day 1, and I can only hope to inspire others as a future leader. Read on for an update of the main events the IFMSA delegation has attended.

The IFMSA Induction in the WHA
The Ebola crisis shook the foundations and greatly humbled international organizations in 2014, and we had anticipated that the agenda points would be attuned to how the WHO modifies its response to global health emergencies, surveillance for disasters and communicable diseases (and in particular, neglected tropical diseases), and antimicrobial resistance in relation to intellectual property and health financing. My fellow delegates and I are excited to have an overview on the proposal of 17 Sustainable Development Goals as an extension (and they reiterate “extension, not replacement”) of the Millennium Development Goals which expire in 2015.

The effort of externals to IFMSA from legal, education and political sectors among our delegates, compounded with the impressive resume of varied advocacy work our delegates possess, shone through with the preparation within each stream (namely 1) Antimicrobial Resistance, 2) Child and Adolescent Health, 3) Climate Change and Health and 4) Human Resources for Health). With tracking documents, an updated list of delegates from member states, we were scampering between the Salles armed with our advocacy strategies, to attend the first Plenary Session (the more determined advocates among us waste no time in camping in the hallways to corner relevant delegates to our streams, an impressive feat at 8am on a Monday morning).

Plenary and Committee A
Upon the opening of the Health Assembly, Shri Jagat Prakash Nadda, Minister of Health & Family Welfare of India is sworn in as President of the 68th World Health Assembly to preside over plenary events, and it is evident from his speech that health financing is all the rage among the Member States for this Assembly. He cites exciting funding efforts for the proposed WHO contingency fund, implantation of the Consultative Expert Working Group framework and the Member State Mechanism on SSFFC medical products, to the applause of the delegates.

Similarly, German Chancellor Angela Merkel touched upon the necessary resilience of health systems and requested the 192 member states and observers to reflect on the deep grooves left by the devastation of the Ebola crisis. Accountability among all parties was of recurrent mention as she illustrated the responsibility of G7 to the global health agenda. A particular focus of her speech was on the dire import of the phenomenon antimicrobial resistance and the Global Action Plan in response, on par with what our IFMSA delegates advocating for in a policy statement.

In the afternoon, the well-humored and succinct Margaret Chen, Director-General of the World Health Organization addressed five key points for the direction of the WHO in future. Her points spanned creating a unified programme for health emergencies with performance metrics for an appropriate response time frame. Particularly groundbreaking was her call for 100billion USD contingency fund for emergencies in the wake of the delay in Ebola response, citing her belief that “Ebola shot our organization to the core”. Congratulations were in order for the PAHO to be the first rubella-free region, and the increasing engagement of women in healthcare.

Side Events
I personally attended the Global Health Security Agenda: From the Ebola Epidemic to Measurable IHR Implementation side event, facilitated by Dr. Anarfi Asamoa-Baah, the Deputy Director-General of the WHO. Representatives from the USA, Uganda, the Kingdom of Saudi Arabia among others discussed the concept of ”What Gets Measured Gets Done”, fighting for improvement of assessment tools and indicators for sustainable capacity on specimens transport and disease surveillance systems. Of particular interest was the fact that 75% of emerging diseases have a zoonotic focus, as indicated by Norway, who also introduced a Twinning model to connect member states beyond the political bubble. Collaboration is again emphasized, but between more and less developing nations as they have finally thrown  out the North-South model of health inequity.

In the afternoon, we further split for side events, with a significant portionof our delegates sitting for the “ From Commitment to Action: Delivering on NCDs and Health in the Post-2015 Era” at the Intercontinental hotel where Global Surgery, the topic of a SWG from within the IFMSA was heavily mentioned, inadvertently endorsing the work of our attending delegates. I had attended “The Political Commitment and accomplishment on Neglected Tropical Diseases” back at the Palais, and had the pleasure of learning about sleeping sickness from a timeline video on the WHO effort to eradicate the disease (our health officials do seem to love their infographics), and discussion of how far member states such as Malawi and The Gambia have reached  in the fight against pathogens such as lymphatic filariasis and schistosomiasis.  A particular historical moment was a woman, one of few being treated for Guinea-worm in attendance, a reminder to the delegates in the room that it is not naive to invest hope in the eradication of stubborn neglected communicable diseases in future. “Childhood cancer: universal access to treatment, care and support from a Global perspective” at the Geneva Press Club also had our delegates in attendance.

A Final Thought
Despite the pittance of time permitted for our delegates to ease into our advocacy strategies, we had great success stories in attracting member states to our cause, tracking the delegations of our member states for a particular health issue or just for the acknowledgement of the presence of a youth voice, with some such as the delegation of the Philippines being so supportive as to share our statements with their allied states It is not difficut to see that the reach of our delegation is extending beyond the Assembly, with the office of the DNDi and with the WMA among other successful connections.

Whisperings of new policy statements are popping up (such as on youth involvement in delegations), some as a result of new connections with delegates and others issues which had always been at the back of our  minds that needed the final push of diverse input from other students—a true testament to the importance of collaboration, whether it be among students, delegates or member states.