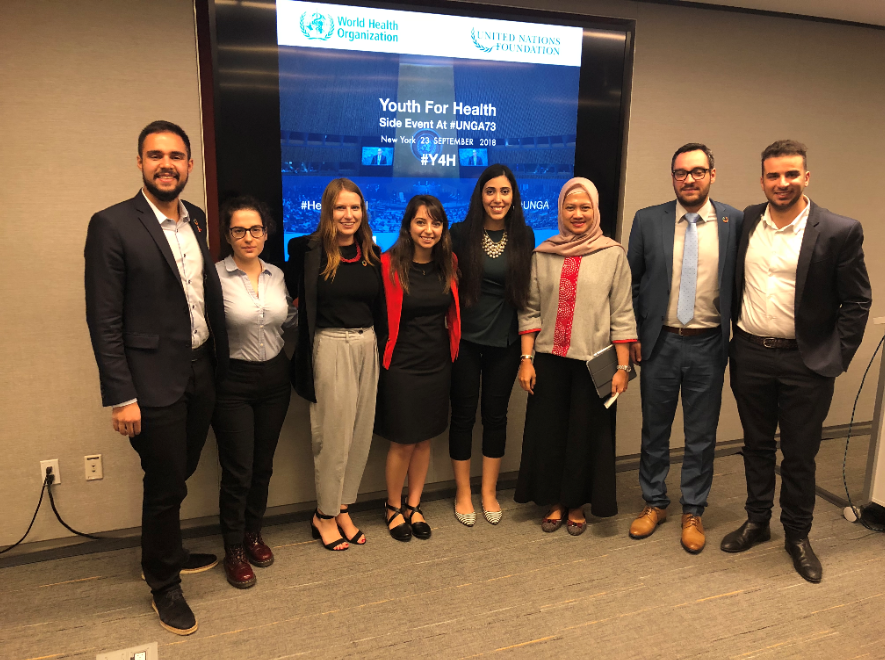 The UNGA this year has very important high level meetings some of which are: Nelson Mandela Peace Summit, The fight to end tuberculosis [convened by the President of the General Assembly], Commemoration and promotion of the International Day for the Total Elimination of Nuclear Weapons, and Comprehensive review of the prevention and control of non-communicable diseases.

IFMSA has an ECOSOC status in the UN since 2003, which grants us the opportunity to participate in UN meetings as part of civil society organizations. This year, our participation in UNGA was of high importance due to the high level meetings happening that are related to our priorities which are TB, NCDs, Meaningful Youth Participation and Human Rights and Peace.

IFMSA attended the second week of UNGA, mainly between the 22nd and 28th of September, based on our commitments and participation opportunities. IFMSA delegates to UNGA 2018 were: 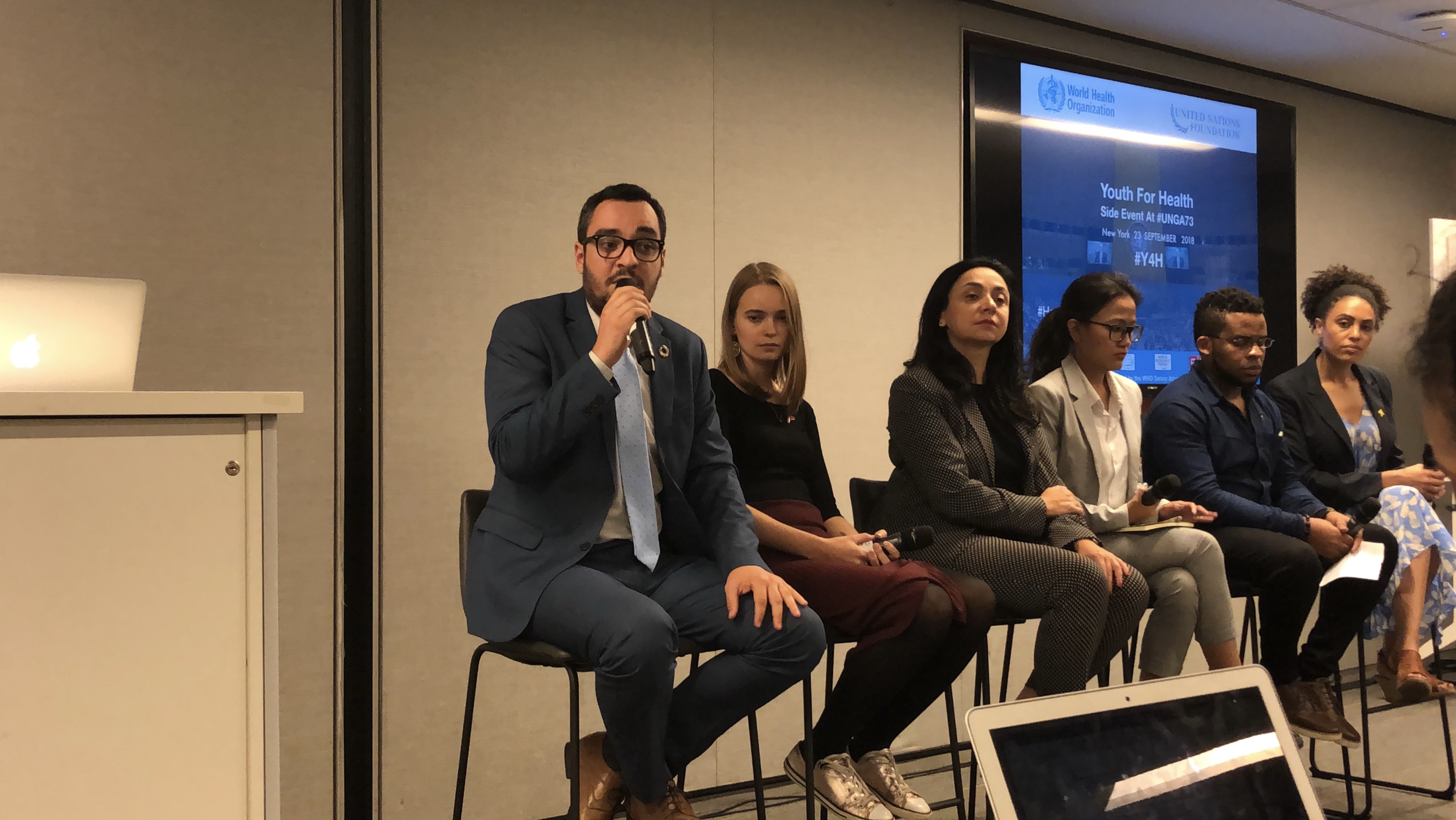 Through our participation, we aimed to advocate for IFMSA priorities within the two high level meeting related to health (NCDs and TB) and emphasize the importance of meaningful youth participation in UN processes by actively participating in the Launch of UN Youth Strategy. In addition to continuing and strengthening existing partnerships, and build new ones. It was also important to us to support the establishment of youth engagement platforms in WHO through participation in the discussions that were held in UNGA side events, and to outshow our commitment toward the UHC and PHC global movements.

This year, IFMSA was actively participating in UNGA, not only by attending certain events and advocating for our stances, but as well co-hosting three side events and speaking in a high level one.

The High Level Event “Youth2030” which was held on the 24th of September in the Trusteeship Chamber in the United Nations Headquarters, witnessed the launch of the first ever UN Youth Strategy 2030 by the UN Secretary General. The UN Youth Envoy Office held a selection process for a youth representative to speak about the Youth Strategy and to call for action on meaningful youth participation on behalf of youth worldwide. IFMSA’s Vice President for External Affairs 207/2018, Batool Wahdani, was selected as the youth speaker for this event and delivered the opening speech which focused on role of youth and value of involving young people in all processes, shedding light on the issues and the difficulties they face. The event was attended by the UN secretary general, representatives of international organizations, member states, celebrities and royalties, to emphasize everyone’s commitment to advance youth’s agenda. Here you can watch the full event (Link):

In addition,  IFMSA co-organized the high level event “UHC leaves no one behind: working together towards good health and well being for all” by being responsible for the youth segment of it. The event had several high level speakers, from ministers, World Bank President, WHO Director General to many others. IFMSA made sure to give the space for youth to present their vision about UHC and primary healthcare. In collaboration with other youth organization, 6 young speakers shared their stories and vision with healthcare, and provided innovative solutions for the problems around us.

During UNGA as well, IFMSA Co hosted two side events which were organized by he World Health Organization. The Youth for Health side event organized by WHO was attended by youth from various organizations to discuss the  youth role in different global health processes especially the PHC and UHC movements, NCDs and TB, and how we can emphasize and support their role more. The WHO Partners Meeting on Youth Engagement event served as a platform to brainstorm and decide on the next steps for meaningfully engage youth organizations in WHO process.

Through our participation in UNGA, we advocated for our global priorities and ensured to stand up for meaningful youth participation and represent youth worldwide. IFMSA remains committed in ensuring to represent its members in the best way possible in international platforms and to actively engage in shaping and solving global issues. 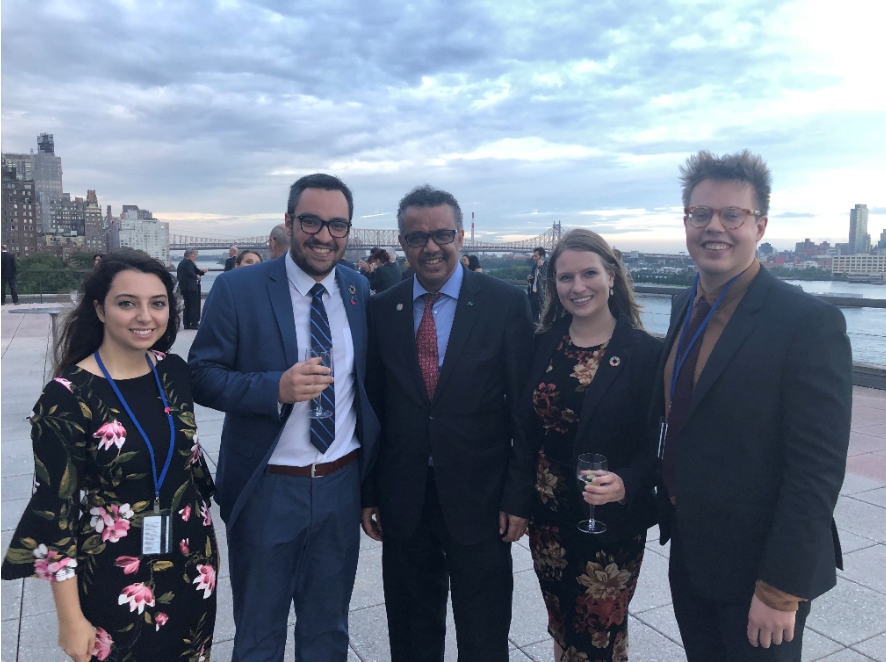