UN Forum on Human Rights, Democracy, and the Rule of Law 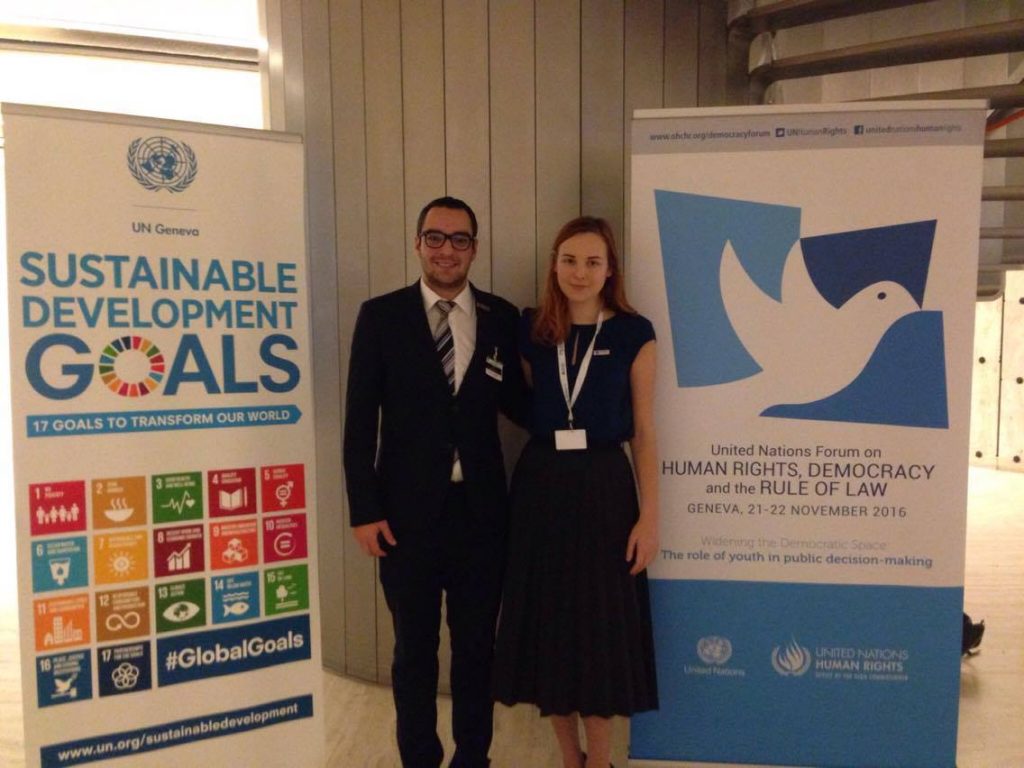 IFMSA was always a platform for medical students who strived to create an equal and peaceful world, where Human Rights are respected, protected and fulfilled. In reflection to IFMSA’s longstanding history of engagement in human rights and peace and our activities on the international, regional, and local levels, IFMSA is actively participating in external events connected to human rights and peace.

The first session of the Forum took a place in Geneva, Switzerland (Nov. 21-22, 2016), under the theme of Widening the Democratic Space: the role of youth in public decision-making. IFMSA was represented by Marian Sedlak, Liaison Officer for Human Rights and Peace issues, and Alice Claeson, General Assistant for Europe with a focus on Refugee Rights and Health and member of the United Nations Task Force.

IFMSA recognizes Human Rights as interdependent and indivisible. As such, in order to enable meaningful participation of young people, especially people from marginalized and underrepresented groups such as young women, people with disabilities, refugees, asylum seekers, LGBT + youth and ethnic minorities, we need to look closer into barriers and challenges which occur during this process.

The morning of Day 2 was focused on the role of youth in sustainable development policies, in particular the role of young people in the translation of the 2030 Agenda for Sustainable Development into national and subnational policies. In addition, many participants and panel speakers brought up the Security Council resolution 2250 on Youth, Peace and Security and its implementation. While some participants felt education and awareness around the 2030 agenda is vital for youth action, others preferred to focus on supporting youth in tying their already ongoing projects towards the 2030 agenda.

The final afternoon panel discussion focused on the avenues for engagement of young people in the global arena, in particular within the UN system and regional organizations. The UN youth delegate program was stated as the best practice, and much of the discussion focused around how to improve the program and increase the influence of youth delegates. IFMSA also supports the UN youth delegate program and advocates for governments to include national youth representatives in official delegations to UN and other high-level meetings. In addition, IFMSA promotes young peoples participation in intergovernmental processes universally across the UN system through mechanisms such as the UN Major Group for Children and Youth. (IFMSA policy statement on Post2015 Future Development Goals – August 2015). In connection to engagement of youth in the UN system, participation barriers such as funding, understandable and accessible information and visas were brought up.

On the margins of this Forum, the very inspirational campaign “Not Too Young To Run” was launched, originally a youth-led initiative in Nigeria now picked up by the Office of the Secretary General’s Envoy on Youth with several partners. “Not Too Young To Run” is an initiative calling for the promotion of the rights of young people to run for public office and to end the widespread age discrimination in this area.

In conclusion, the Forum addressed various challenges young people around the world face while trying to participate in public policy-making and decision-making. In order to establish effective ways of meaningful youth participation and more importantly – the action based on youth voices, there is a need to review the mechanisms and strategies that already exist, even to create new avenues, and make them work for the benefits of young people.