Throwback: Power and Privilege within the Medical Profession 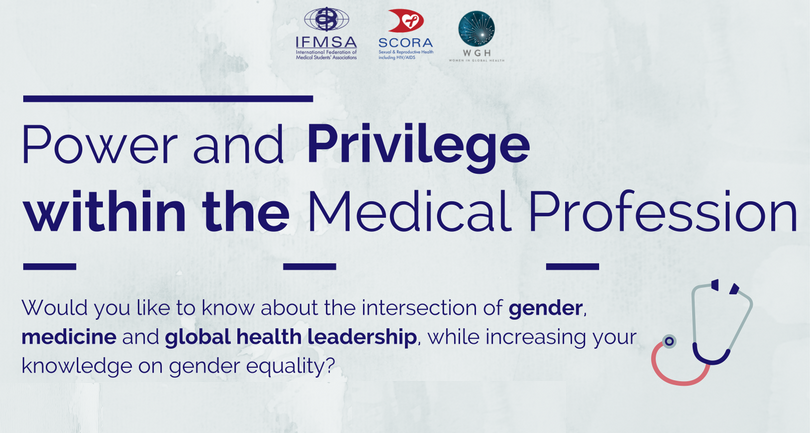 International Day for the Elimination of Violence Against Women – November 25th.

Our perceptions around gender still play a big role in defining how humankind acts. Since every society in general is inherently influenced by the patriarchy and its hetero- and cis-gender normative views, it is only logical that health care settings would also be affected by social gender norms and stereotypes. The International Federation of Medical Students’ Associations (www.ifmsa.org), and Women in Global Health (http://www.womeningh.org/) both have a strong stance on gender equality and share a common vision, standing for a world in which all people feel equally empowered and are given the same opportunities regardless of their gender.

With the aim to overcome that, IFMSA and WGH partnered last year to host a webinar aimed at providing a general overview on the roots of unequal gender empowerment and representation, and to carry out capacity building for IFMSA members on all matters relating to gender. The webinar, called “Power and Privilege within the Medical Profession” was held in February 2017 and consisted of a panel of four experts that explored how pre-conceived gender roles play out among healthcare professionals. Since the International Day for the Elimination of VIolence Against Women is around the corner we believed it would be good to have a throwback to the event and share with you some key remarks:

Elise Buisson, Immediate Past President of the Australian Medical Students’ Association (AMSA),  noted that despite a pretty even balance of men and women in medical school, medical leadership in Australia has yet to reach parity. Only about 1 in 3 Australian medical schools are headed by women, similar numbers are seen when looking at chief medical officers and women specialists. This lack of women in leadership role also extends to hospital administration where only 12% of hospitals with over 1000 employees have a women CEO. Temitayo Ifafore, USAID, noted that despite having similar education and training backgrounds there are pay gaps up to $20,000 per annum between men and women doctors.

Rosemary Morgan, RinGs, remarked that even when looking at the nursing profession, which has historically been a woman-dominated sector, men are more likely to advance quickly and gain leadership roles. She noted that it is also important to understand the privilege a male doctor may experience over a female doctor:

Political representation in global health is also lacking – Desiree Lichtenstein, Women in Global Health Co-Founder, highlighted that in recent years between 23 and 26% of Member States Chief Delegates were women.

What can you do to address inequities in your work?

In highlighting an incident in Australia where a female vascular surgeon offhandedly commented that if women wanted to get ahead in surgery they should give in to sexual advances, Elise provided an insight into how institutions and systems can respond to inequities.  Following the incident, a review was undertaken which found that 40% of medical trainees had experienced some form of bullying and 19% reported workplace harassment, of that 7% was of a sexual nature.  This in turn led to a parliamentary enquiry into bullying and harassment in the medical profession, leading to a set of recommendations for improving the environment in the medical profession.  However, in an AMSA survey asking medical students to share their experiences with bullying and harassment there were antagonistic comments noting that bullying and harassment were key pieces of the medical profession.  Elise noted that her takeaway from this was that you need to bring people along with you and that people respond better when issues are explained and they are given the opportunity for discussion rather than having the issue forced on them. She said we need to be able to explain to people why it is a problem, be willing to go back to explaining basics and highlight the benefits of gender parity.

Rosemary highlighted how young medical doctors and health professionals can address racism and sexism within their own institutions. She highlighted looking at the individual knapsack of privileges, a tool developed by Peggy McIntosh to explore one’s own privileges.  Rosemary noted that medical students can use their own positions of privilege to reduce inequities by recognizing your own privilege, using their position to amplify the voices of others, becoming more informed colleagues and friends, more supportive mentors to those who face different challenges, and by challenging practices, policies and procedures that perpetuate inequities.

Temi highlighted that we have to practice caution when instituting what we believe are inclusion initiatives. For example, committees targeted at diversity have the intent of representation, but sometimes there is not room or space for meaningful engagement within these committees. These committees also put an undue burden on the oppressed, such as women and people of color, as their participation adds an extra workload and takes them away from time dedicated to their other responsibilities. She highlighted that it is everyone’s responsibility to fix gender gaps, not just women and that we have to be aware that we often put the pressure on those feeling the oppression the most to fix the problems. Finally, she noted that there is no one way to practice medicine, and to remember that medicine works within a health system.  Keeping this in mind, the doctors who have the most impact are able to recognize that they can’t practice and heal your way out of a broken system.

As a former IFMSA Official, Desi had specific advice for how members can approach power and privilege in IFMSA. She strongly recommended participating in IFMSA as much as possible, since the Federation will provide you with tools to learn more about gender and intersectionality. She also recommended always putting your intersectional/gender glasses on and questioning the status quo.

Elise concluded with explaining that for medical students who are experiencing or have noticed areas of power inequities need to identify three things: 1) individual capacity (do you know what pathways are available to you to address this issue) 2) community (what is the culture of your hospital?) 3) policy environment (are there rules/laws that protect gender equity).  She noted that in the medical environment it can be difficult to have the individual capacity to speak out, but that you should seek champions to help you, and recommended engaging with a diverse group to advance your cause to highlight its cross-cutting nature.

Overall, the webinar speakers made a great compilation of facts and remarks while always providing an intersectional perspective on how power and privilege work with regards to gender. As a conclusion, it’s essential to acknowledge that gender disparities are still an issue globally and by extension among health workforce, causing a wide range of restraints to the underrepresented individuals. It was an insightful opportunity which had a great reception among viewers and will hopefully created a small chain reaction within IFMSA and by extension in medical schools and healthcare settings all across the globe.

Bridging in the gender gaps needs of multiple simultaneous and well-geared interventions to create a long-term impact, actions that the IFMSA has always been trying to carry out either locally or internationally. Recently though, there has been a surge on the acknowledgement of this issue by IFMSA members and leadership which has translated into the creation of formal processes to tackle it. These processes, led by a Task Force on Gender Empowerment and Representation, are trying to tackle the issue from its core and showcasing the best version of IFMSA, one that strives to be feminist, inclusive, just and a safe space for all its members. Of course, it’s not an easy road, but if we want to reach a point in which gender isn’t a pushback for anyone, we need to keep going strong.

If you want to watch the webinar, just click on the following link: https://www.youtube.com/watch?v=5pYZ8gCSWNg&t=3s