Talks, tensions and Talanoa: The first week at UNFCCC SB48 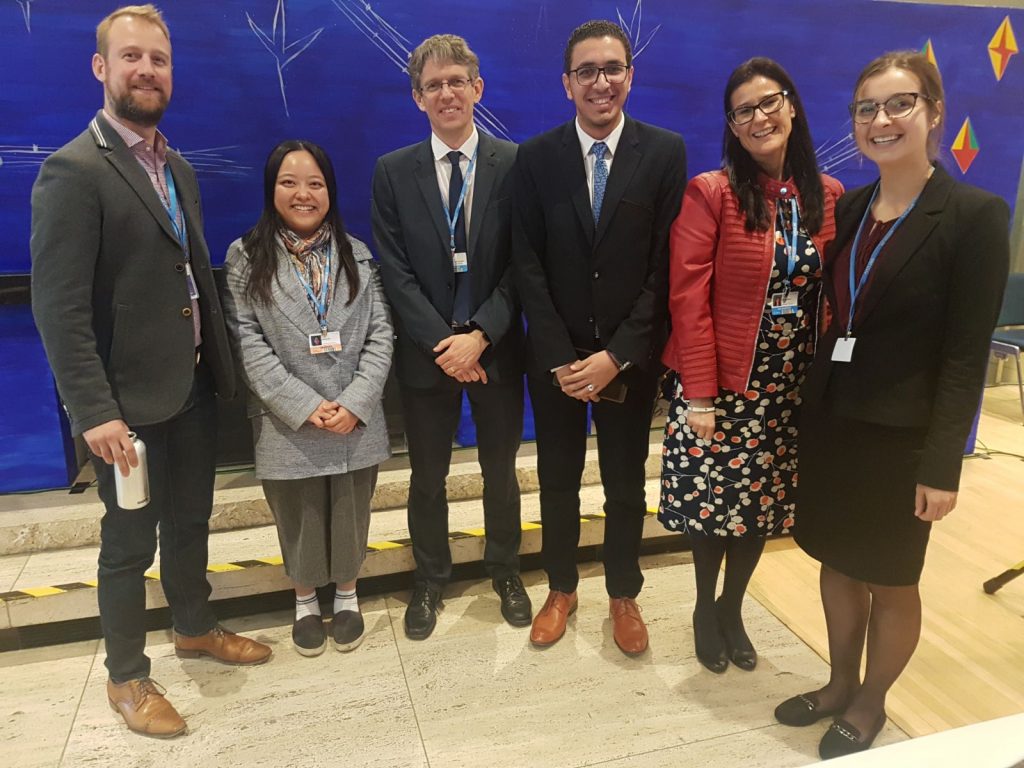 The IFMSA was represented during the UNFCCC Bonn Climate Change Conference SB48 happening in Bonn, Germany from the 30th of April until the 10th of May 2018 to advocate for the importance of health in the negotiations. In the following blog post the first weeks’ delegates share their experiences and the highlights of the first week.

As we sat in our first plenary meeting, and official opening of UNFCCC, the IFMSA delegation shared nervous looks at each other. Excited for the week to come, yet nervous about the formality and processes we were about to attend. Our ears were peeled for any mention of health throughout the week. An overview of the highlights of the week.

Discussions on health and climate change

A side event arranged by WHO was an event of interest we couldn’t overlook!  WHO announced once again that the Paris Agreement is a global public health agreement. Excitingly they have been asked by the Fiji COP23 presidency to produce a report on health as preparation for a possible health decision in order to decide the most cost-effective interventions and is already working on a variety of projects regarding climate change and health. The focal areas of WHO were health adaptation to climate change, reducing the deaths from air pollution, increasing evidence for climate action and engagement of the health community and civil society.

We got to hear regional examples of climate and health action as well, one from Cook Islands and one from European Union. Small Islands Developing States (SIDS) are the states confronting the climate change problems in real life and its effects on health, and Cook Islands is one of them. Cook Islands came up with an idea of waterless toilets during the time of drought, community water storage tanks. It is a great idea as building infrastructure can benefit the health at the same time, and it is integral to the UNFCCC report. The european view on climate change and health was announced as being about adaptive capacity and resilience and they have set public health priorities, such as improving air and water quality and minimizing effects of chemicals. It was an very interesting session on the status on health in climate change.

Furthermore the longer we listened the more we could spot subtle references to health or health related matters in the official processes and negotiations as well. There is still a long way to go, but if you listen close enough there is at least something.

Our action and dialogue with delegates

During the conference, we had a chance to have a silent demonstration about the relation between health and climate change. We drew some organs with the negative health effects on them, and we got approached by many delegates. They were interested in how climate change affects health. Besides the demonstration we held an online campaign where medical students around the world shows that climate change affects health, find the event here. Hopefully our message can be shown in real life later on! 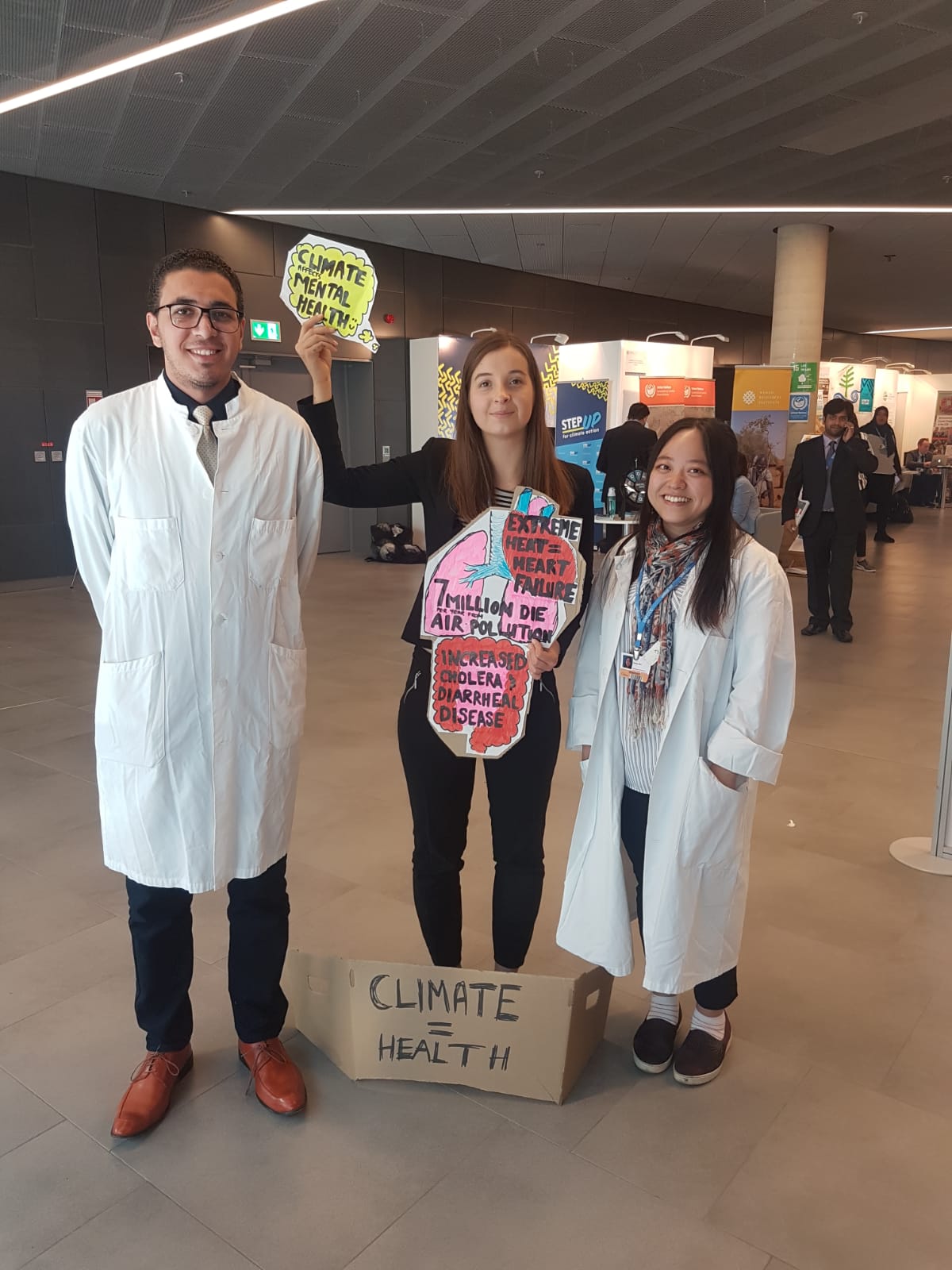 Talanoa is a traditional word used in Fiji to describe a process of sharing ideas, skills and experiences through storytelling. The Fijian COP23 president called for this dialogue to occur to facilitate a discussion between parties and stakeholders to take stock of collective efforts to achieve targets of Paris Agreement. Before starting this conference, I didn’t really understand the purpose, or what was to be gained from it, and then I experienced it. As YOUNGO, we conducted our own mini-Talanoa, where youth from all around the world shared stories about the following questions with regards to climate change: Where are we? Where do we want to go? How to we get there?

From this sharing of stories I came to realise that all around the world, we’re all in a similar place in terms of climate change, but its manifesting differently across nations. We all think that education, in a way that people can understand and relate to their own lives is of utmost importance moving forward. And climate change cannot be approached from only one discipline. It needs to become integrated into all parts of public policy, health policy, education, transport, agriculture, you name it. These stories from my peers were inspiring and invigorating. I learnt about the current state of affairs around the world, but I became hopeful that if we work together we can figure out how to effective tackle climate change.

On Sunday, the first official Talanoa Dialogue took place where party delegates and stakeholders alike came together, sitting in a circle, all on one level and shared their stories. A Talanoa. And I can’t wait to hear what the outcome of this was…

While we were eagerly learning about all facets of climate change, sometimes the topic of health came up in places we didn’t necessarily expect. We attended a side event about Eating for the Climate. Our current food system contributes 20-30% of all anthropogenic GHGs, and this is anticipated to rise to 50% by 2050 if we don’t change the way we produce and consume food. Not only did this event emphasise the need for public education campaigns, it gave some really interesting examples about labelling the environmental footprint of foods, de-stigmatising vegetarianism, changing the culture of food consumption and campaigns around the public health benefits of a more plant based diet. It was interesting because prior to this event I’d not given much thought to how what I eat impacts the environment. This was something I could easily change, and I’m excited to see how I go as I’ve been inspired to move towards a more sustainable diet for the health of our planet, and can’t wait to see personal health co-benefits too!

The role of the youth in working towards climate change mitigation and adaptation was heavily emphasised throughout this week. The sentiment of youth are the future and they are the ones who are going to have to live through the reality of climate change was recurring throughout the week. YOUNGO are the collective body of youth NGO organisations, which IFMSA are a part of. But YOUNGO is so much more than that. It’s a platform where youth are given a voice. Where we lift each other up, and collaborate– share ideas and give advice. Following the YOUNGO press conference (hyperlink), I was approached by a party member who was so eager to hear our ideas on how we think we should tackle climate change. It was wonderful and empowering, with YOUNGO taking centre stage at a number of events including ACE workshop, Talanoa dialogues, press conferences and even a plenary intervention!

Climate change leads to endangering human rights. At UNFCCC, they have defined 8 elements (The great 8!) in terms of human rights: indigenous people, intergenerational equity, gender equity, just transition, food insecurity, ecosystem integrity, public participation. It made us feel that climate change means life for some people and we should not only protect them but also take immediate action to decrease the number of people affected.
Furthermore the right to health is mentioned as a human right in the Paris Agreement, which we tried to bring up in these discussions.

Both health and climate change are overarching issues which embrace multiple sectors of a society, and sometimes we could find some intersections. Examples include food insecurity and agriculture, antimicrobial resistance and local-produced food production, as well as climate refugees and human right to health.

Our time in Bonn was priceless, and we learned incredibly much about climate change and health. We are now headed home, with new knowledge, more passion and great friends. 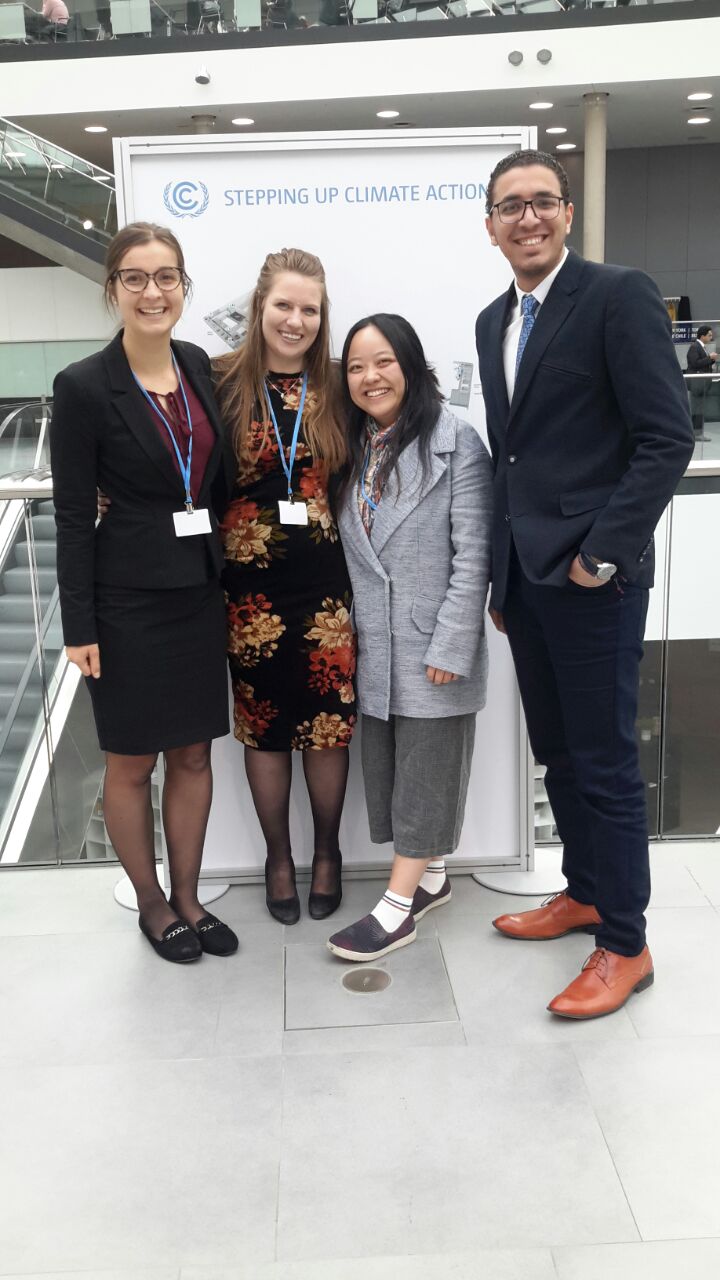