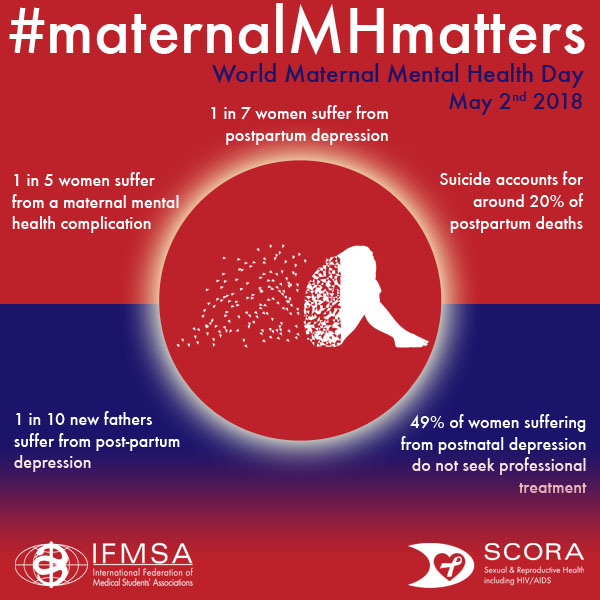 Summarizing sentence: We hope that more people will no longer see the post partum depression as a matter of stigma.

Postpartum depression is an often overlooked maternal mental health disorder, affecting both women during the postpartum period as well as their partners. Although about 85 % of women have mood disorders symptoms after giving birth commonly known as baby blues, about 10 % develop serious illness affecting the lives of both the mother and her family – as the members of society, it affects us all. Until recently, this topic was not recognised in IFMSA work, however, this year maternal mental health is included in the European SCORA priorities, as a result, a session on Postpartum Depression (PPD) was facilitated during the March Meeting in Egypt addressing not only the clinical theory and emotional aspects but also what we as a society can do to help women suffering from PPD. As the topic received immense interest from the participants, a small working group was created in order to tackle the issue on regional level.

The aim of the small working group, coordinated by SCORA regional assistant for Europe and Maternal Health and Access to Safe Abortion programme coordinator, was to raise awareness on the post partum depression, help to understand how to recognise and how to address it properly by celebrating 2nd of May, World Maternal Mental Health Day. The campaign we developed consisted of Facebook picture frame promotion and development of comprehensive infographics addressing the definition, numbers, symptoms and ways to get involved regarding the PPD that were shared in social media on 2nd of May. We are very happy to say our campaign has achieved great results, as the frame was used 633 times not only by European region members but by from students all around the globe and the infographics were shared extensively. We hope that more people will no longer see the post partum depression as a matter of stigma and that beneficiaries of the campaign are now well informed on addressing the issue.

We encourage you to walk the talk and get involved in your national member organisation by raising awareness and starting a discussion on this often forgetten issue. If you are not yet sure on the concrete steps you could take, we welcome you to join in the last part of our campaign – IFMSA European open space discussion focused on exploring the Post Partum Depression project possibilities you could apply in your national member organistion! More information will follow soon. #maternalmentalhealthmatters.