Launch of The Inter-American Task Force on NCDs 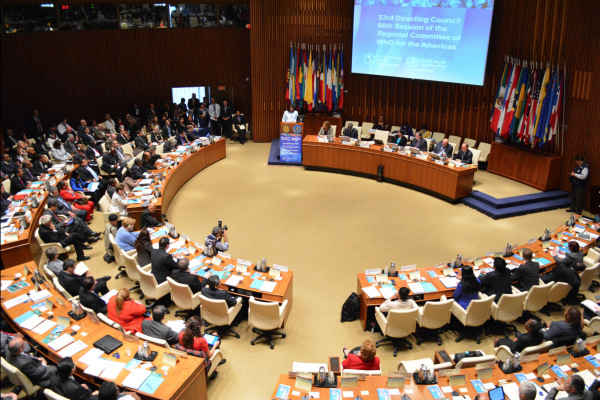 On the 17th of June, we had the pleasure to attend the launch of a regional initiative towards the fight against non communicable diseases (NCDs). The event took place in the Hall of the Americas in the Organization of the American States (OAS) – a place that has seen multiple historic agreements – the day prior to the 45th OAS General Assembly.

The Task Force acknowledges the enormous social and economic burden posed by NCDs (which are responsible for 80% of all deaths in the Americas) and recognizes that the increasing prevalence of theses diseases is driven by social determinants. It also states that the prevention and control of NCDs mandate a response from the all parts of the governments and of society. The Task Force has committed to engage with relevant sectors of governments and society; to advocate and support the application of universal health coverage and universal access across the region; and to intensify the response to NCDs.

Remarks were made by Dr. Clarissa Etienne, PAHO Director, who has highlighted the importance of a multi-sectoral approach, and by H.E Luis Almagro, Secretary General of the OAS, who has mentioned the important aspect of gender vulnerability.

We had the chance to hear from five countries: Brazil, Jamaica, Mexico, Panama, and Trinidad and Tobago, who have shared their experiences and best practices in the national fight against NCDs. Brazil discussed the promotion of physical activity in schools, while Jamaica mentioned the strategies used to counter the main risk factors of NCDs, such as alcohol consumption and tobacco. Trinidad and Tobago stated that they intend to increase their political response and has proposed a few ways forward. The most shocking statements came from Mexico, a country in which seven of every then adults suffer from obesity. The country recently approved a law to limit the quantity of sugar in soft drinks. Finally, Panama revealed itself as the most advanced country of the region in tobacco control policies.

The second panel of the day was centered on the remarks from the different organizations of the Inter American task Force on NCDs. It was truly inspiring hearing all this different voices and sectors motivated for one reason, the healthy future of the Americas. As the practice manager for health of the World Bank, Dr. Daniel Dulitzky, said, you need to talk money if you want to save lives so to prove to the ministers of economy that saving lives is the real business.

The very ambitious goal of a 25% reduction in premature NCD mortality by 2025, doesn’t seem as unachievable as before. The multi sectoral work and the leadership from the Pan American Health Organization will bring the Region into a more healthier and sustainable future.

We, IFMSA and its national members organizations, should join efforts with the Inter American Task Force on NCDs in national and local work. It is important to encourage members to take actions and raise awareness on the burden posed by NCDs. We shall work with our communities to promote primary health care, prevention and promotion of health – all at the core of any health system.