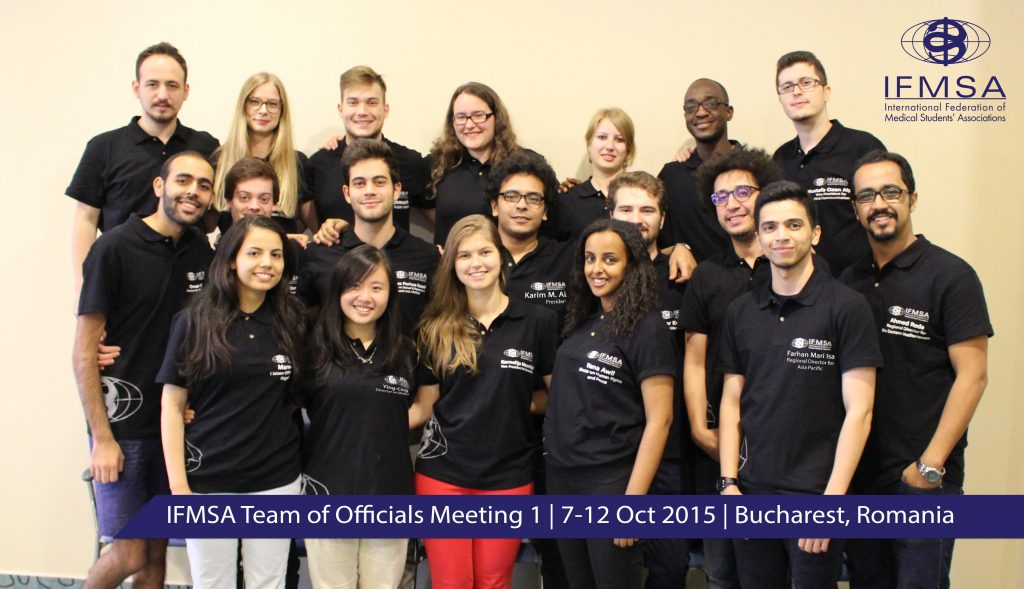 With lots of motivation, dedication and enthusiasm, your Team of Officials is starting the term of office 2015-2016, determined to spare no time, effort or energy in serving you.

IFMSA is working for A world in which all medical students unite for global health and are equipped with the knowledge, skills and values to take on health leadership roles locally and globally . Having such a vision as the motive behind every action contributes to the bigger picture of the role of IFMSA in the international community and its effect on medical students worldwide. IFMSA is created to serve the need of the local medical student going through a wide variety of services and products worked on by cooperation of a huge global team.

Gathering medical students worldwide into this huge family requires sleepless nights and enormous efforts done by a group of people from cities and countries that expands across the globe. This group of people is composed of your Team of Officials and the International Team members who are cooperating together towards a common vision. Year after year and team after team, IFMSA is growing bigger and better and for the past 65 years, priceless efforts combined have shaped the federation that we are having today and the legacy that is being handed over. With the strong determination of the newly elected generation, there is no obstacles ahead of IFMSA development, just challenges that we are determined to overcome.

For the term 2015-2016, a lot of challenges are ahead of the federation as the first term of the new leadership structure as well as the second term of IFMSAs three year strategic plan, yet with the cooperation of all our members, the support of our partners and the participation of medical students worldwide, the Team of Officials 2015-2016 is ready to face them all. Lets impact our world together for a better tomorrow.