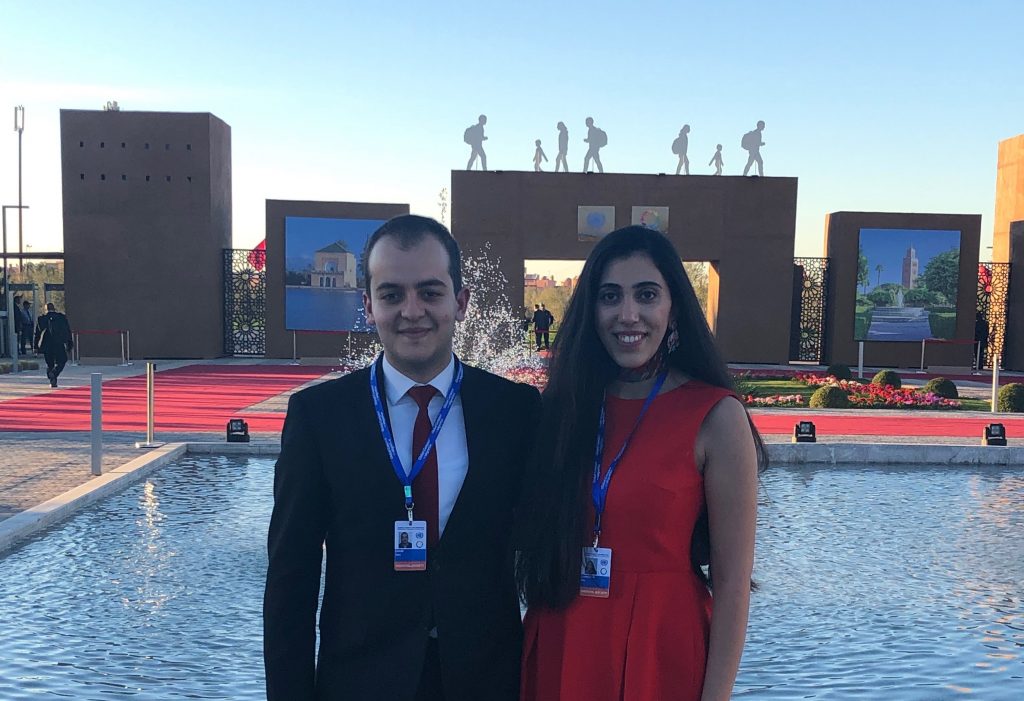 “Migration should be a choice not an act of desperation.”

On December 10-11, Heads of State and Government and High Representatives met in Morocco, to reaffirm the New York Declaration for Refugees and Migrants and to adopt officially the Global Compact for Safe, Orderly and Regular Migration, a global framework to enhance cooperation on international migration in all its dimensions.

IFMSA had the pleasure to participate and represent the voice of its members in the arena of migrants health and meaningful youth involvement in policy making.

What is the GCM?

The intergovernmental conference to adopt the global compact for safe, orderly and regular migration is the fruit of the 2016 New York Declaration, where Heads of State and committed to put Migrants and Refugees in the center of their agenda during the United Nations General Assembly and to develop a comprehensive compact to cover all dimensions of International Migration.

The final document, adopted on the 10th of December, was developed through a 2 year  inclusive and transparent process, with consultations and negotiations between relevant stakeholders and Member States.

Prior to the official intergovernmental conference, the IFMSA delegation participated in highly engaging and relevant side-events, all related to SCORP’s global priorities (Refugees’ and Migrants’ Health and Rights, Humanitarian Action , Children’s Health and Rights and an overarching concept, Meaningful Youth Participation)

THE UCL-Lancet Commission on Migration and Health : Report Lunch

The event was a round table to lunch the report on migration and health by the UCL-Lancet Commission on Migration and Health. The Commission addresses Migration as a global health priority and one of the characterizing issues of our time and presents evidence-based approaches to enhance Migrant’s health and their access to healthcare.

The UNESCO Education and migration: Global Education Monitoring Report on migration and displacement

This event brought together education stakeholders from different countries and settings to discuss the recently-published global education monitoring (GEM) report by UNESCO and to takes an in-depth look at education’s relation to migration and the best practices to incorporate migrants in education frameworks.

OHCHR (Office of the High Commissioner for Human Rights): Migrants in vulnerable situations: National practice for admission and stay based on human rights and humanitarian grounds

OHCHR and DLA Piper Law firm presented the results of a mapping and analysis of current national practices for the admission and stay of migrants in vulnerable situations.Panelists and participants discussed and reflected upon Human Rights protection mechanisms for migrants, their rights to health and children’s health in different countries.

The ICRC hosted a panel discussion with speakers from the African and European region to share their experiences in projects focusing on missing migrants. They also discussed the launch of their new project which aims to alleviate the extensive burden of missing migrants and the harsh conditions they endure in addition to aiming for family reunification.

This session hosted by IOM aimed to discuss the positive changes in the international community and share a common perspective of migration as the GCM is implemented.

The welcome reception and the press conference:

The IFMSA delegation had the honour to hear opening remarks from Louise Arbour, Special Representative of the Secretary-General for International Migration and also questions and answers from reporters from all across the world and to enjoy the welcome reception where they met and discussed with different stakeholder and NGOs working in the same field.

The Plenary and the adoption of the GCM :

The Opening of the conference was a historical moment when members states adopted the Compact but also a great opportunity for heads of state to re-express their engagement to put migration in the center of their policies and to ensure that the  implementation will harvest the benefits of migration and reduce its negative effect.

Link to the Opening Plenary (here)

Dialogue 1 : Promoting action on the commitments of the Global Compact for Safe, Orderly and Regular Migration

The panel was an an opportunity for Member States and Stakeholders to kick-start examples of GCM implementation, it was an opportunity for IFMSA to deliver a statement about Migration and Health and to share its’ vision concerning access for migrants to healthcare as condition to achieve Health for all and an important step towards the 2030 Agenda.

📺 Link to the Statement : Migrants’ Health

Dialogue 2 : Partnerships and innovative initiatives for the way forward

Dialogue #2 aimed to foster cross sectoral cooperation and act as the leading path to initialize partnerships needed to kickstart GCM implementation and ensure accountability. Several stakeholders including but not limited to member states, NGOs, and intergovernmental organizations delivered statements.

It was IFMSA’s pleasure to deliver its second statement in this dialogue as well, which focused on the importance of meaningful (and not tokenistic) youth participation and concrete actions to achieve GCM implementation.

📺 Link to the Statement : GCM Implementation and meaningful youth participation

IFMSA also attended the commemoration of the 70th Anniversary of the Universal Declaration of Human Rights in Marrakech where Secretary General Antonio Guterres and High Commissioner for Human Rights Michele Bachelet were attending and Her Excellency Louise Arbour was moderator.