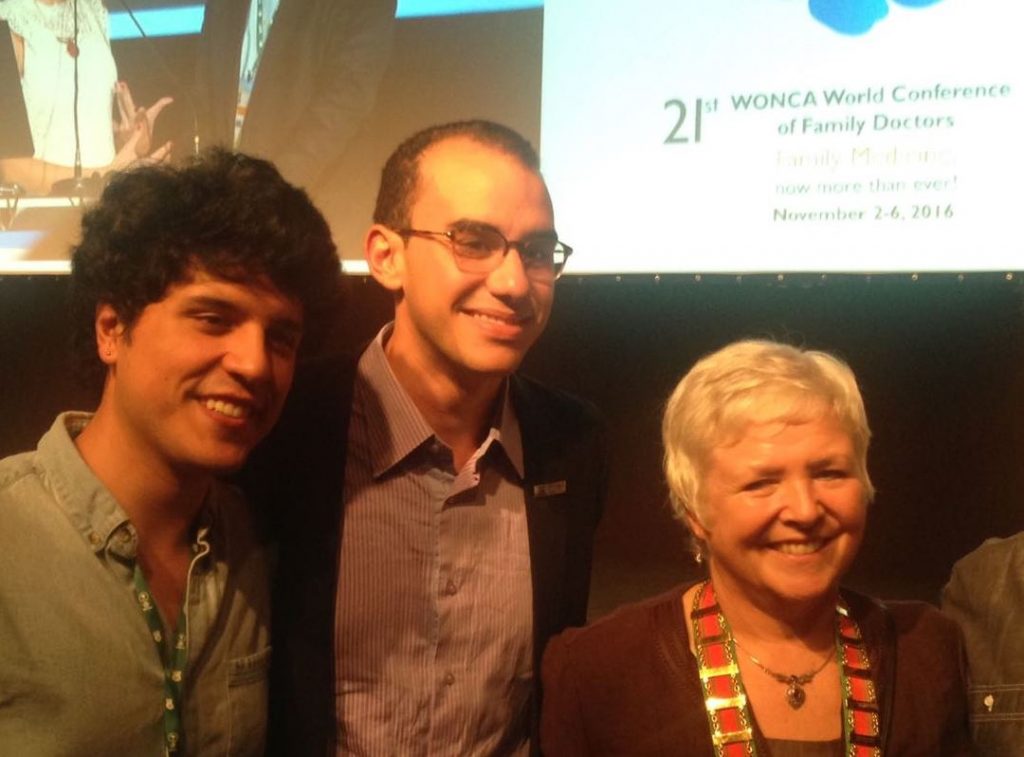 IFMSA was present at the bi-annual World Conference of Family Doctors (WONCA World Conference) from 2nd to 6th of November 2016 in Rio De Janeiro, Brazil. Skander Essafi, the Liaison Officer for Public Health issues and Carlos Acosta, the Director on Sexual & Reproductive Health incl. HIV/AIDS, were both present throughout the conference that followed the WONCA Council (30th October-1st November) and presented IFMSA perspective at different occasions.

It had been decided 6 years ago that the WONCA World Conference 2016 would be organized in Rio De Janeiro, Brazil by the Brazilian Society of Family Medicine (SBFMC) that contributed immensely in the development of the discipline across the country. WONCA is the global family doctor organization, that has IFMSA as member in collaborative relations since August 2014 (i.e Memorandum of Understanding).

The WONCA World Conference hosted more than 5000 delegates from across the world including young and experienced doctors but also students including IFMSA representatives, national members from Brazil (DENEM-Brazil and IFMSA-Brazil) who did excellent representation during the event, but also previous IFMSA members in their family medicine residency training.

The schedule of the conference was diverse and consisted of plenaries, workshops, symposiums and poster presentations. It also varied from plenary lectures to interactive workshops, ranging from individual to populational perspective. Many cultural and social events happened around the conference to showcase the link between family medicine and different social and art concepts. Several overall themes were tackled: Family Medicine and Environment, Rural Medicine, Challenges in family medicine, Family Medicine and Medical (undergraduate and post-graduate) Education.

IFMSA, as per its official relations with WONCA, participated in the council meeting, prior to the official conference. Country representatives discussed and adopted new position statements and reports from executive officers and working parties from the past triennium, as well as the election of the future WONCA Executive (Members at large, Young Doctor Representative and president-elect Dr. Donald Li) and the host of the 2020 Conference, Abu Dhabi. It was an opportunity for IFMSA to observe procedures and areas of work in common and what could be the avenues of collaboration and support in the future. Additionally, some country representatives of national family medicine colleges were interested in IFMSAs work and collaborate with our relevant National Member Organization, and re-establish some connections (e.g Malaysia, Trinidad and Tobago)

IFMSA was also invited at the first WONCA Rural Health Assembly to hear about the recent achievements of the WONCA Rural Medicine Party in different nations and discuss further plans. Skander had the opportunity to present IFMSA, our activities and contribution to Rural Health and Students engagement in the Working Party to support medical students and young doctors activities, mainly via capacity building on the topic, the compilation of our resources, the development of a rural health toolkit and updating our policy statement. We are also encouraging the, soon to be launched, rural medicine students network as well as the Rural Health Conference in Cairns Australia, April 2017. This was a very good setting having all stakeholders involved present to discuss upcoming plans with this working party, being the most active in WONCA and with important historical relations with IFMSA.

The opening ceremony addressed many great achievements of WONCA, convened by Dr. Michael Kidd, who supported continuously the establishment of Young Doctors Movements worldwide (YDMs) as well as Medical Students to be exposed to primary care at early stages in order to build further interest and capacity in the discipline. This has been highlighted in the WONCA Rio Statement for Primary Care in the quest of Universal Health Coverage that was well received. Special focus has also been drawn on the collaboration between WONCA and the World Health Organization to improving health systems via the guidebook that has been launched in the 2013 Prague Conference with a foreword by Dr. Margaret Chan, but also by developing a closer contact with the Department of Service Delivery and Patient Safety to develop key strategies to make of primary healthcare the backbone of health system and in line with the Health Workforce Strategy as well as the High commission for health employment and economic growth goals.

During the conference, Brazil has demonstrated its investments to public health and the Organizing Committee from the event was actively involved in giving practice scenarios to the participants. Public Health coverage has increased from nearly 3% to 65% in the last decade according to Dr. Kidd who also highlighted several characteristics that make Brazils public health system unique such as a team based approach, the immunizations program and womens health program among others. IFMSA delegates had the chance to get to know one of the basic health units from Rio; it was impressive to see how units are organized and how communitary agents work closely to the health team. We recognize that this is not the reality of most healthcare units of Brazil but the country is making efforts towards this direction which seems to be working for the population in this specific context. Recognizing that there are still many gaps to fill, the WONCA council awarded Brazil with the Global Health Award for the country’s efforts on improving family medicine in the past years.

Furthermore, IFMSA took part of the discussion at the WONCA education party. There was an assessment made by the members to improve and increase efforts on undergraduate curricula as well as the creation of a qualification board that will help develop family medicine programs from an official stance from WONCA. With this new beginning for the planning of the next years, IFMSA could be highly involved within the development of this project in line with our internal discussions with social accountability involving medical schools. It is relevant to say that in this process, advocacy for inclusive evaluation processes of schools and the consideration of cultural sensibilities is something the IFMSA could work on in this working party.

To conclude, IFMSA had the pleasure to be part of the WONCA World Conference that is a stepping point of the collaboration between IFMSA and WONCA, knowing that our Memorandum of Understanding is expiring next year, and where our members are also invited to join and learn from such activities.