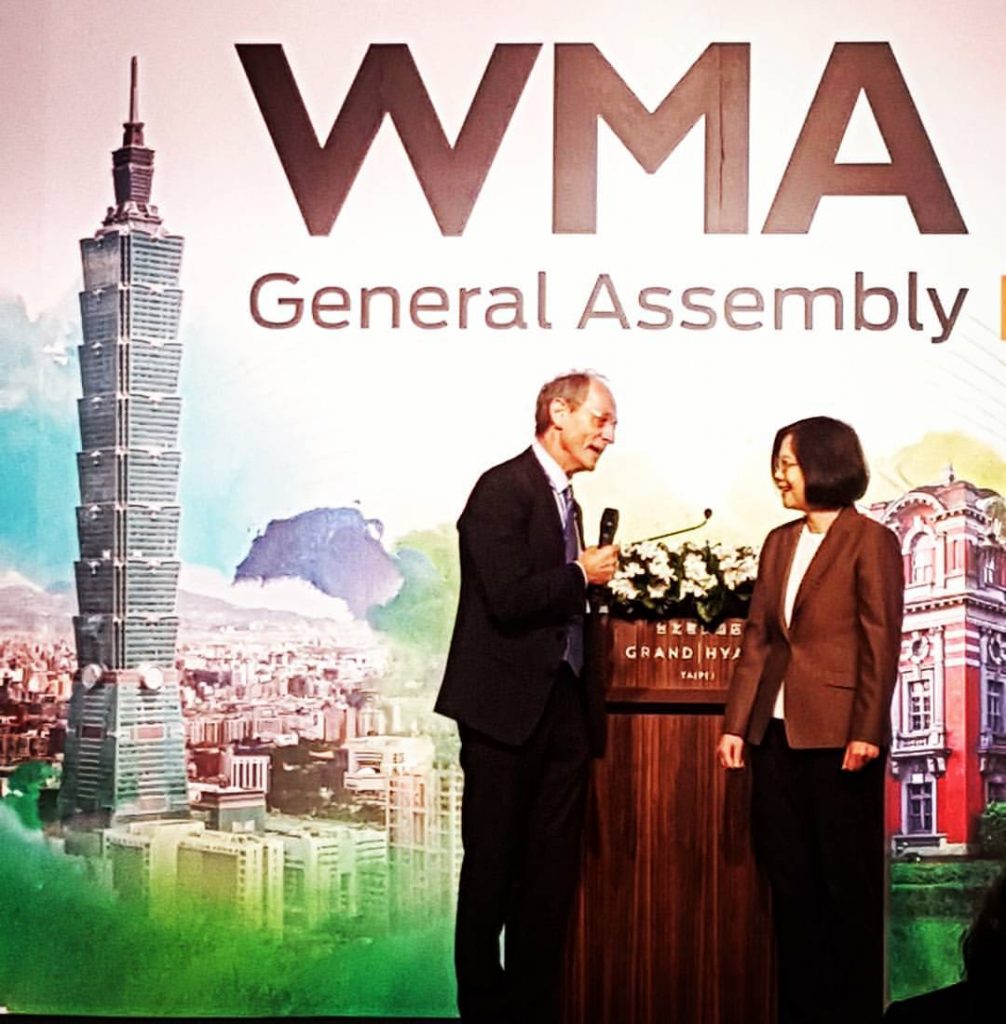 IFMSA has a longstanding history of collaboration with the World Medical Association (WMA): we have a formal partnership with WMA, which deemed the importance of our presence at the WMA GA in Taiwan, China between October 19-22, 2016.

The WMA gathers twice every year, once for their general assembly and once for council. During this years GA the WMA adopted several new policies on topics such as refugees and migrants, zika virus, health databases and biobanks, FCTC, obesity in children, divestment in fossil fuels, medical tourism, traffic injury and protection of healthcare facilities in Syria. Furthermore, the GA marked the ending of the WMA presidency of the social determinants of health legend Sir Michael Marmot. In conjunction the new WMA president from India Dr. Ketan Desai was installed in office and Dr. Yokokura Yoshitake from Japan was elected as president of WMA 2017-2018. In the assembly ceremonial session we had the pleasure of the Taiwanese President presence, and it is a woman!

As IFMSA has a signed memorandum of understanding with WMA, which states that we can have IFMSA interns at the WMA office in France and also provides the opportunity for IFMSA alumni to join the WMA as associate member for five years without cost after graduation, Marie (IFMSA VPE) had a meeting with the secretariat to ensure these parts of our collaboration go smoothly.

IFMSA was present in the caucus on environment and health to both gain inspiration and seek opportunities for collaboration for the upcoming COP22, where both WMA and IFMSA will be present. Interesting climate friendly initiatives from National Member Associations were presented such as the green doctors office in Norway by which smaller clinics can get certified as eco friendly by living up to certain requirements regarding energy, waste, responsible purchase of products etc. They believe this certification might attract clients to choose those clinics.

Prior to the WMA GA, the Junior Doctors Network (JDN) of the WMA had a two day meeting, which IFMSA also attended and it was organised by FMS-Taiwan. The JDN consists of individuals of which many represent their national junior doctors networks. Naturally, there is also a large proportion of IFMSA alumni involved. In the JDN meeting there were presentations of the work of the national JDNs, and it became clear that many national JDNs collaborate with our IFMSA NMOs eg. in Peru, Greece, Taiwan and Nigeria. Also the working groups of JDN were presented, which have focused on antimicrobial resistance, climate change & health, stigmatisation of psychiatric patients, internal election procedures and a JDN strategic plan. Furthermore, on the last day there was a half-day session about end-of-life treatment, where practises from different countries were presented and discussions were taking cultural and religious differences in to consideration.

We look forward to a year of great collaboration between WMA and IFMSA.