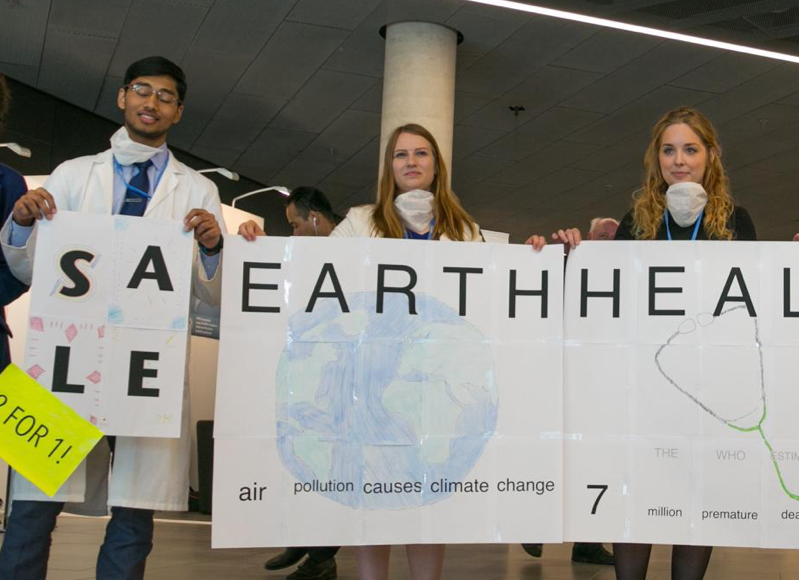 Following many meetings, negotiations, and side events, our delegation for the first week of the UNFCCC May Climate Talks has achieved a lot. The second week brought with it a new delegation, which was excited about continuing the effort to promote health in the negotiations, and was as successful. Our message was simple: we need ambitious and immediate climate change actions that include health.

For this second week of the meeting, the IFMSA delegation said goodbye to James and Line and welcomed Tanmay and Kim:

Tanmay Jadhav is a 2nd-year medical student from MSAI-India and a first-time attendee at the UNFCCC. He looked forward to the mechanisms of health policy and advocacy and take the knowledge back to NMOs worldwide to promote youth involvement in the process of decision making. He is also passionate about Oceans and Agriculture in addition to Health in relation to climate change.

Kim van Daalen is a prospective 1st year Global Health master’s student and the National Public Health Officer of IFMSA – The Netherlands. This is also her first time to the UNFCCC as she is attending the second week of the inter-sessionals. She hoped to find opportunities and activities for NMOs worldwide to engage in climate change action, to be able to promote IFMSA’s incredible work on climate change activities, but most of all hopes to let parties realize that health is an essential issue in the ongoing negotiations in the way to COP23.

The first day of the second week started off, as every day to come, with the YOUNGO daily coordination meeting, also known as the “Spokes Council”. Introducing many of the delegates that had joined in for the second week to YOUNGO and the UNFCCC in general. Our delegation and the Health Working Group saw a few new faces which were interested in the health aspect.

Followed by this, there were multiple side-events and both closed and open negotiations. We followed as much as we could, seeing some negotiations heading quickly towards a decision and others moving without much progress.

One of the interesting developments to follow on Monday was the Nairobi Work Program, which actually stresses on human health as part of adaptation measures. In short, the Nairobi Work Program on impacts, vulnerability, and adaptation to climate change contributes to advancing adaptation action through knowledge in order to scale up adaptation at all governance levels, with a focus on developing countries. This Climate Change Conference they successfully worked within the Subsidiary Body for Scientific and Technological Advice on a draft on impacts, vulnerability, and adaptation to climate change. Several member-parties also hosted a side event with framing and showcase presentations, where we were happy to see how the relationship between ecosystems and health was mentioned several times.

One of the sessions important to promote meaningful youth participation in week two was the 5th Dialogue on Action for Climate Empowerment (ACE). The 5th Dialogue was organized in two sessions which each focused on one of the thematic areas of climate change education and climate change training. Both sessions included presentations on good practices and lessons learned followed by working group discussions. The good practices and lessons learned included several projects focusing on educating and training young people, governmental employees, as well as the general population about climate change, mitigation, adaption etc. Furthermore, funding opportunities were shared. In the working groups focusing on the involvement of Non-State Actors, IFMSA was able to showcase their experiences within, mostly peer-to-peer, education and training and gave further input on the engagement barriers and opportunities of NGOs. On the second day, Sanne was the rapporteur of the working group and therefore able to implement some of our key points into the summary outcome.

One of the most inspiring side-events that took place on Tuesday was about NDC partnerships. This is a new global initiative to help countries achieve their national climate commitments and ensure financial, technical and informational assistance, delivered as efficiently as possible. At this moment they hold 57 membership countries and are growing quickly over the past months. The side-event revolved around the benefits of the program. An inspiring initiative that shows how countries working together can strengthen their powers in the battle against climate change.  As Mongolia said ‘’It is like having two brains. Even though I had limited time to prepare the NDC, with the good support we have today many documents that we want to integrate.”

On Wednesday, we divided ourselves yet again to follow as much of the different negotiations going on as possible to find the out which ones would be of an interest to us as IFMSA.

In the meanwhile, yet again, different inspiring side-events took place. For example, Sanne went to session ‘Vulnerability in Africa, Caribbean and Pacific countries: Adaptation, Capacity, People’. The meeting aimed to provide a platform for outreach and advocacy in support of implementing the Paris Agreement, strengthen negotiation aspects and facilitate dialogue and exchange of ideas among vulnerable ACP Island Developing States, Least Developed Countries, landlocked countries and coastal countries. To our delight, the ‘’well-being‘’ of people was frequently mentioned as were several social determinants of health and subjects surrounding a sustainable livelihood and security.

In the meanwhile, Kim was present at a side-event dialogue about analyzing successful climate-related SDG implementation. Urgent climate action will safeguard the 2030 Sustainable Development Goals, since many of the goals, such as ending poverty and achieving food and water security (and of course health!), can only be met under a stable climate. Several guest speakers passionately discussed this topic and while their expertise was not health care per se, they did relate several points to it.

Another interesting event that took place was the Multi-stakeholder dialogue on the operationalization of the local communities and indigenous peoples platform. Indigenous people are the ones that currently see the effects of climate change on their communities and their well-being better than anyone else. As the Paris Agreement has recognized the need to strengthen knowledge, technologies, practices and efforts of local communities and indigenous peoples related to addressing and responding to climate change, they established a platform for the exchange of experiences and sharing of best practices on mitigation and adaptation in a holistic and integrated manner. At the end of the dialogues the parties agreed on three main focus points of the network; capacity building, knowledge and climate change policies and actions.

On Thursday morning, YOUNGO held a press conference to showcase the views of their various Working Groups and their thoughts about the negotiations of the last days. Kim was able to speak on behalf of the Health Working Group and Tanmay on behalf of the Oceans Working Group. Kim spoke about how we can no longer afford to ignore health in these negotiations and how it is not only the health sector that is concerned. Recently, a report on Climate Change and Health under the Nairobi Working Program was published of which the director of the Adaptation Programme of the UNFCCC secretariat said it “clearly highlights the need for the inclusion of measures to protect human health.” We need to start implementing these solutions, instead of ignoring the subject, before it is too late. Therefore, the health working group strongly recommends the COP 23 to include a health action day as was organized in the COP 22 to raise awareness about the implications of climate change on health. We call yet again for immediate action to put health as a core subject of the UNFCCC sessions, the negotiations and the National Adaptation Plans, and that youth, as part of the solution, are engaged in these policy discussions, to build more sustainable, resilient and healthy societies.

The rest of the day was focused on the closing plenaries of the SBSTA, SBI, and APA. After heated discussions about the agenda of the APA, the APA agenda items were eventually postponed to the COP 23. During the closing plenary of the SBI, we were honored with the presence of the prime minister of Fiji. He spoke about Fiji’s vision for COP 23 which should be ‘’Transparent, inclusive and with a big focus on the implementation of the Paris agreement‘’. During the SBSTA YOUNGO stressed once again on the importance of meaningful youth participation in the climate change negotiations.

In conclusion, we feel that we have had a productive week, and have managed to make progress on our goals for the meeting; we have discussed the links between climate change and health in order to raise awareness, we have collaborated with the WHO, WMA, and YOUNGO to show the commitment of medical students everywhere, and we have a fairly good idea of what the negotiations at COP23 will revolve around and how IFMSA can input into this.  We can no longer afford to ignore health in these negotiations, we need ambitious and immediate climate change actions that include health.