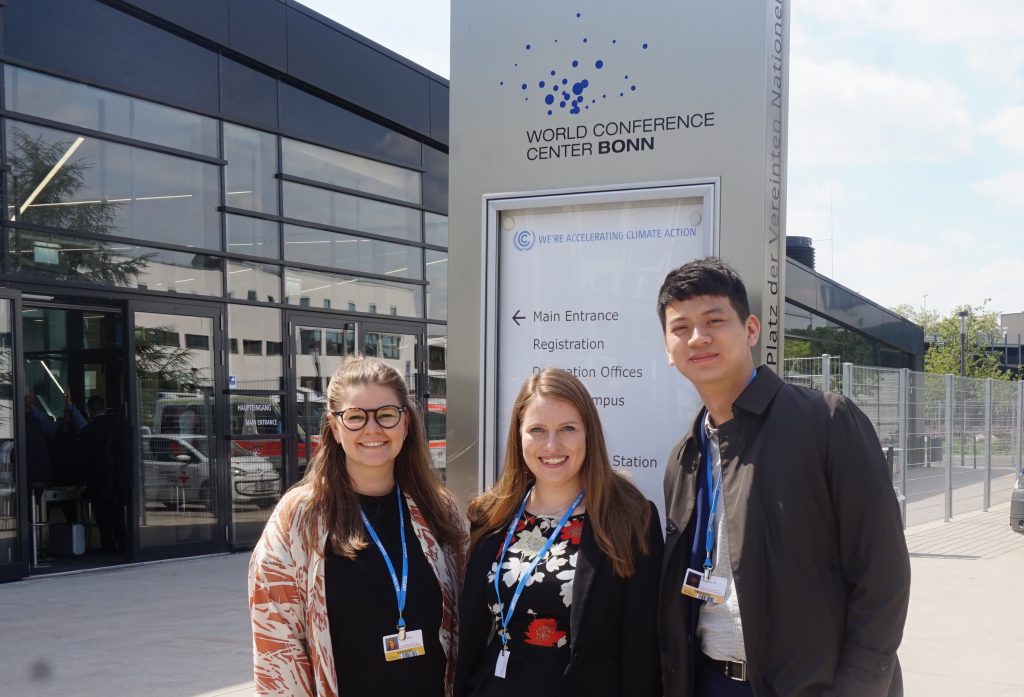 After weeks of preparations, online meetings and lots of reading up on documents, the IFMSA delegation to the UN climate talks in Bonn is finally here and ready to get some serious climate change advocacy going!

The meeting has the very straightforward name of SBI46/SBSTA46/APA1-3 – it is the 46th meeting of the Subsidiary Body for Implementation, the Subsidiary Body of Scientific and Technological advice, and the Ad Hoc Working Group on the Paris Agreement under the UNFCCC – the United Nations Framework Convention on Climate change. We are here with the focus of ensuring that health impacts of climate change, health co-benefits etc., remains a topic that the different countries consider, as well as to track negotiations in preparation for the next big climate conference, COP23, which will take place this November here in Bonn.

For this first week of the two-week long meeting, the IFMSA delegation consists of these three members:

The first day at the World Conference Center provided many opportunities to dive into the climate talks. We started the day with YOUNGO, the Youth Constituency of the UNFCCC, as we also would in the upcoming days, to make a common plan for youth to maximize our impact here. Afterward, we met with the organizers of the Conference of Youth, COY, which is held every year ahead of the Conference of Parties, to give input as well as to ensure IFMSA’s involvement in arranging the event. There are also local COY’s happening to build capacity on Climate Change all over the world, so if you wish to have one in your country, get in touch with the delegation and we will put you in touch with other organizers of both the global and local COY’s!

After the quiet but productive morning, it was time for the official opening of the negotiations. The chair of the SBSTA opening actually mentioned both health and linked climate change talks with the sustainable development goals, so we were off to a good start! Hopefully, parties will be inspired by this to ensure that health is a central topic in the upcoming days.

At the end of the day, a big reception was held by the Bonn local government and the German health ministry in a nearby museum. Free food usually means that all young people show up, and we went home a few hours later, with full stomachs and having met many old and new contacts.In the middle of the day, the negotiations took a break to make room for an event that was planned for all the parties to hear, entitled “Technical Briefing: Climate Change and the Rights of the Child”. Unfortunately, most parties took the opportunity for a break over the opportunity of listening to inspiring panelists diving into this hugely important topic. We of course attended, and heard the COP22 president explain how children are especially vulnerable to the (health) effects of climate change; and a survivor of typhoon Haiyan telling the absolutely horrifying memory of losing her whole family to the terrible flood, to send a clear message that the effects are happening now and are very severe. She explained how, in the wake of this huge disaster, children are being exploited, and need extra care to ensure their health and rights. Benjamin Schacter from the Office of the High Commission on Human rights, who we’ve worked with before for IFMSA’s press conference at COP22, implored parties to put children’s right and health at the center of negotiations. He continued, saying that “children are agents of change, not only a legacy to be protected! Children are entitled to participate in climate change talks in a way suitable for age and maturity. Children of today and many tomorrows will suffer the worst consequences of the continuous warming planet”. Overall, this event really moved us and supported our messages of health inclusion and meaningful youth participation. We only wished that all parties would have remained in the room – they could have learned an important lesson!

After a well deserved good nights sleep we found ourselves back with new energy for the second day, which again started with the YOUNGO meeting, after which Sanne joined the YOUNGO working group on Action For Climate Empowerment – known under the more catchy name, ACE, which revolves around the five pillars: Education, access to information, public participation, training, and international cooperation.

Following the different negotiations and meetings happening, two things that we hear a lot is “the Paris Rulebook” and “the Facilitative Dialogue 2018”. What does this mean, you ask?

Well, that is what we are trying to find out! What we know so far is, that parties will be working on what they call the “Paris Rulebook”, which will be the instrument that establishes the rules and processes that will be the backbone of actually fulfilling the ambition of the Paris Agreement. It will revolve around how countries will communicate efforts on adaptation, climate finance, capacity building and technology transfer, reviewing processes, as well as means of implementation and compliance. This is planned for adoption at the Facilitative Dialogue 2018, to take place within COP23 in November this year.

This means that we will most likely be moving into text-based negotiations soon, to which IFMSA, of course, needs to closely monitor where we can give input.

The highlight of the second day was the so-called AIM workshop. What does AIM mean, you ask? Well, nobody seems to know and it is hard to find anywhere, but it looks into how to ensure meaningful engagement of Non-Party Stakeholders. In order to hear everybody’s view upon the subject, all stakeholders gathered in the workshop. The last time this happened was six years ago, so it was a special opportunity to have our voices heard. After a lot of interventions from parties and constituencies is was time to divide ourselves into different break-out sessions in which we could express our views on 3 specific topics: How can Non-State Actors be involved nationally, what can parties do to involve non-state actors and last what can the secretariat of the UNFCCC do regarding the topic. We focused on stressing meaningful youth participation and are glad to say that youth is mentioned quite a few times in the summary report that came out; A success!

On Wednesday, we met with WHO and World Medical Association (WMA) representatives to discuss health within the UNFCCC processes and how we can engage ourselves as being part of the health community. We also took some time to prepare for the side event planned by the WHO on the health impacts of climate change and the health co-benefits of mitigation.

For the rest of the day and the following days, we divided ourselves to follow as much of the different negotiations going on as possible to find the ones which would be of an interest to us as IFMSA. For example, James went to a Technical Mitigation Expert Meeting on forestry and other land use. Climate change justice was emphasized in the event. It is imperative to involve indigenous people in policy making and implementation: their territory, their tradition and knowledge, and the right to choosing lifestyle. Mental health diseases emerge when people are forced to leave their homes due to climate change. It’s very interesting to have a glimpse of how we can link health with these issues.

To our delight, the healthcare sector was mentioned several times when talking about sectors in need of adaptation measures in the 6th Session of the Durban Platform on Capacity Building. In the break-out session on the involvement of non-State Actors, we managed to highlight the importance of engaging experts, such as the health workforce when talking about health sector related issues, and that in order for them to be engaged they needed a clear understanding of the processes behind policies and the drafting of National Determined Contributions. This also made it into the summary report of the session; another success!

The WHO side event, which took place on Thursday evening, was very inspiring and solidified our knowledge on climate change and health. For now, the status of the health response at a global level seems still low, unfortunately, and only a tiny proportion of parties mention health in their National Adaptation Plans or National Determined Contributions. In response to this, WHO is gathering data (link) and assessing the risks and benefits of adaptation and mitigation measures (link) to raise awareness, mobilize the health community and motivate parties to include health in their climate policies. It was great to hear the next step for WHO UNFCCC Climate and Health Country Profiles: By 2020, they will produce regular climate and health country profiles, with national evidence and progress tracking for at least 80 countries! And the event came to the most exciting part for us when Line was able to present IFMSA’s activities on climate change and health, both locally, nationally and globally, and showcased how we bring climate change, health, and advocacy together. In the open discussion time, Line was also able to elaborate on how we apply IFMSA’s policy documents on advocacy internationally and in our NMOs, as the UNFCCC secretariat asked if we were pushing for climate change to be part of the medical curricula.

On Friday morning, YOUNGO held a press conference to showcase the views of their various Working Groups on how the negotiations were going so far and what they would still like to see. James was able to speak on behalf of the health working group to call for immediate action to put health as a core subject of the UNFCCC sessions, the negotiations, and the National Adaptation Plans. As well as that youth, as part of the solution should be engaged in these policy discussions, to build more sustainable, resilient and healthy societies. You can watch the press conference here.

In conclusion, we feel that we have had a productive week, and have managed to make progress on our goals for the meeting; we have discussed the links between climate change and health in order to raise awareness, we have collaborated with the WHO to show the commitment of medical students everywhere, and we have a fairly good idea of what the negotiations at COP23 will revolve around and how IFMSA can input into this. Sanne will be joined by two new delegates for next week, and James and Line look forward to all of their updates on the further progress.