IFMSA present in WHO Global Conference on NCDs 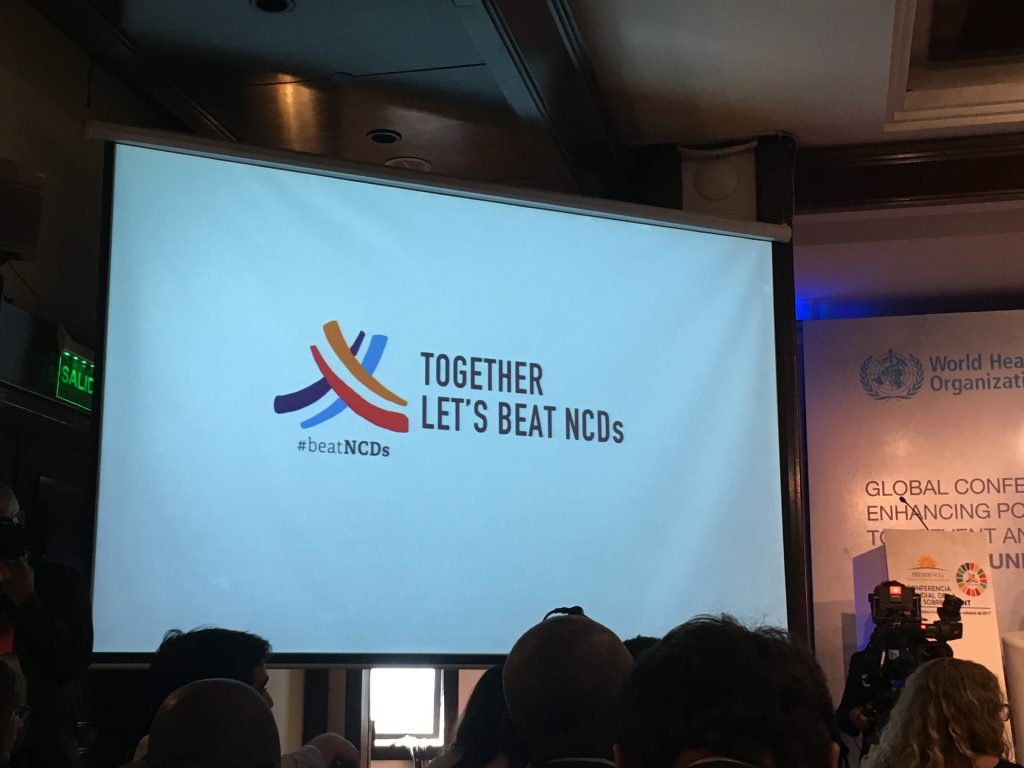 IFMSA was present at the WHO Global Conference on Noncommunicable Diseases, which was held in Montevideo, Uruguay from the 18th-20th of October 2017. Our Liaison Officer for Public Health Issues, Sanne de Wit, represented IFMSA in the meetings.

The overall goal of the conference was: “To highlight the critical links between reducing premature deaths from NCDs and enhancing policy coherence across areas that impact the governance, prevention, management and surveillance of NCDs.” While it is agreed by world leaders that the global burden of noncommunicable diseases (NCDs) represents one of the major health challenges of our times, we will not be able to reach Sustainable Development Goal target 3.4 (to reduce premature mortality from NCDs by one-third through prevention and treatment by 2030), based on the current rate of decline in premature mortality from the four main NCDs: cardiovascular diseases, cancer, diabetes and chronic respiratory diseases.

IFMSA’s main goals for the conference was to advocate for a clear role of youth in the discussions and advocate for all the other priorities from the Budva Youth Declaration (link). Furthermore we wanted to identify key areas and opportunities for IFMSA (and our members) to engage in general and specifically leading up to the UN high-level meeting on NCDs happening next year.

On the first day of the conference heads of states and ministers gathered to listen to an expert panel, discuss ways forward and reaffirm their commitments to put NCDs as a Sustainable Development Priority. By endorsing the Montevideo Roadmap (click) they called for bolder actions. We were happy to see the mentioning of better measurement and response to the critical differences in specific risk factors and determinants affecting morbidity and mortality from NCDs for children, adolescents, women and men across the life course and the need for a healthy health workforce in this outcome document.

The second day was designed for all delegated to exchange knowledge, experiences, best practices and lessons learned in 12 thematic and interactive workshops. In the morning IFMSA participated in the workshop on ‘Success story on strengthening health systems – UHC for achieving SDG 3.4’ where were able to highlight the need for social accountability in medical schools to ensure the future health workforce is equipped and suited to contribute to Universal Health Coverage. Moving to the workshop ‘Success story on promoting mental health and wellbeing: Best practices and lessons learned’ in the afternoon, we had the chance to focus on the need for action in this field and the fact that mental health issues is one of the leading causes of mortality among adolescents.

Outcomes of the workshops as well as closing statements were presented during the last day of the conference. The need for strong political leadership on the topic once again became very clear. But also the need for national advocacy from and engagement of non-state actors was highlighted. IFMSA is therefore in the process of developing tools for its NMOs to take up this challenge.