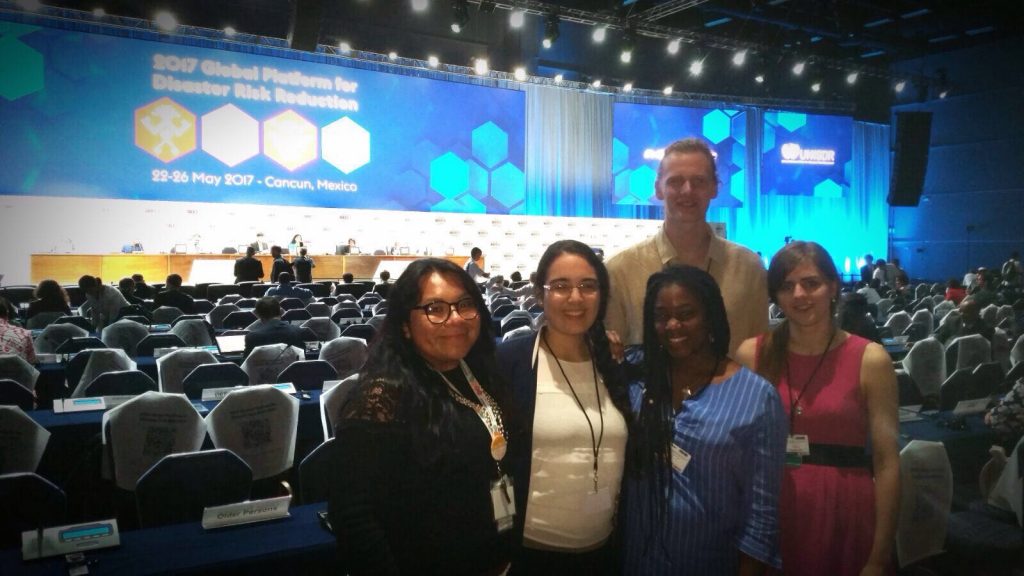 To introduce you to the topic of disaster risk reduction (DRR), IFMSA was involved in the development of the Sendai Framework on DRR 2015-2030 (ref. Sendai Framework), with two years of negotiations including the final adoption during the 3rd World Conference on DRR in Sendai, Japan, 2015. 2017 serves as a checkpoint for follow up on the progress made since 2015 – thereby the official slogan of the GPDRR 2017: “From commitment to action.” In 2015, IFMSA made voluntary commitments on the implementation of the Sendai Framework. We thereby made extended promises to move the DRR and health agenda beyond the framework itself. Therefore, one of the aims of the GPDRR delegation was to promote and report on our work, mainly done through IFMSA & CRIMEDIM Training Disaster Medicine Trainers (TdmT) course.

GPDRR Youth Forum
The first two days in Cancun were marked by the official GPDRR Youth Forum & strategy meeting, organized by the UN Major Group for Youth and Children (UN MGCY) with official support from the IFMSA and other partners. Children and youth should be considered a high priority in DRR area as they make up 50% of the world’s population and are disproportionately more prone to being affected by disasters. Therefore, it is necessary for youth to be involved and meaningfully engaged in dialogues and actions to ensure sustainability and consistency in DRR activities. The UN MGCY has a tradition of arranging similar youth forums on the margins of international meetings to interact with both the international and local children and youth participants. The objectives of this youth forum were to:

The GPDRR Youth Forum consisted of four different interactive sessions and participants were able to attend two of them. Topics included among others an advocacy training, a flood case study in Mexico, a role of social media in DRR, an organization of capacity building training in local communities and a session on leveraging science, technology, and innovation for DRR. Our delegation presented some of IFMSA’s activities at the English Presentations on DRR youth involvement, and other members held a training session on Emergency Response & Health. The training session was based on triage and the nature of emergencies followed by a real size triage simulation. In the end, our delegates also demonstrated how simulation training works in the local university simulation center.

Global Platform for Disaster Risk Reduction
The Global Platform itself started out with regional sessions and our delegation participated in the European and the American briefing. During the European briefing, the European Council, the UNISDR and some European countries such as Montenegro, Italy, Bosnia and Herzegovina presented their work regarding the implementation of the Sendai Framework. 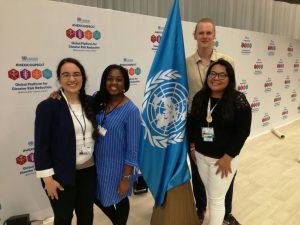 The European Council focused on three levels of their DRR work: increasing knowledge through social networking, development of cooperation among all decision-makers in order to better define authorities’ adequate role in DRR and promoting risk culture among protection. Furthermore, European Council underlined the importance of integration of different areas into interdisciplinary approach as well as the active participation of the civil population. This also concerns vulnerable and marginal groups which are more often affected by consequences of disasters than other communities. The presence of various DRR initiatives without active collaboration and integration with governmental activities was a major concern for the UNISDR in Asia. Another problem which was mentioned regarding the community initiatives was that projects often don’t follow the needs of affected people. One of the proposed solutions to enable meaningful engagement of communities was to make information more available and accessible for local people, in other words, to simply make these projects ‘’community friendly.”

Integration of Health into DRR was a hot topic as well. This session served as a platform for various international organizations and UN agencies, including the International Organization for Migration (IOM) and the World Bank, to report on their activities, achievements, and challenges in their DRR work. The perspective of IOM was particularly relevant for the IFMSA, because of the fact that one of our Global External Focus Areas (GEFAs) for this year is “Refugees and Migrants rights and health.” IOM presented an interesting perspective of interlinkages between migration and the DRR field. The Joint United Nations Program on HIV/AIDS (UNAIDS) aimed to make other actors aware of the role of HIV in the DRR and concluded that HIV is still neglected in DRR area. A session organized by the WHO offered a space for different stakeholders to report on the status of health in DRR. IFMSA had the opportunity to present the Training disaster medicine Trainers course and showcase other amazing activities done by our national member organizations all around the world.

In the end, the GPDRR fulfilled its aim to serve as a platform for connecting stakeholders, exchanging ideas and reflecting on the progress in the implementation of the Sendai Framework. IFMSA will continue its activities in Disaster Risk Reduction field, also by proposing to re-adopt our policy document on Disaster Risk Reduction during AM17 and launching our report on the implementation of the Sendai Framework. 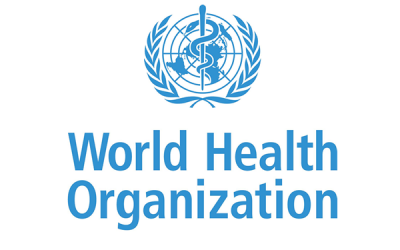