IFMSA Delegation to COP21: End of Week One 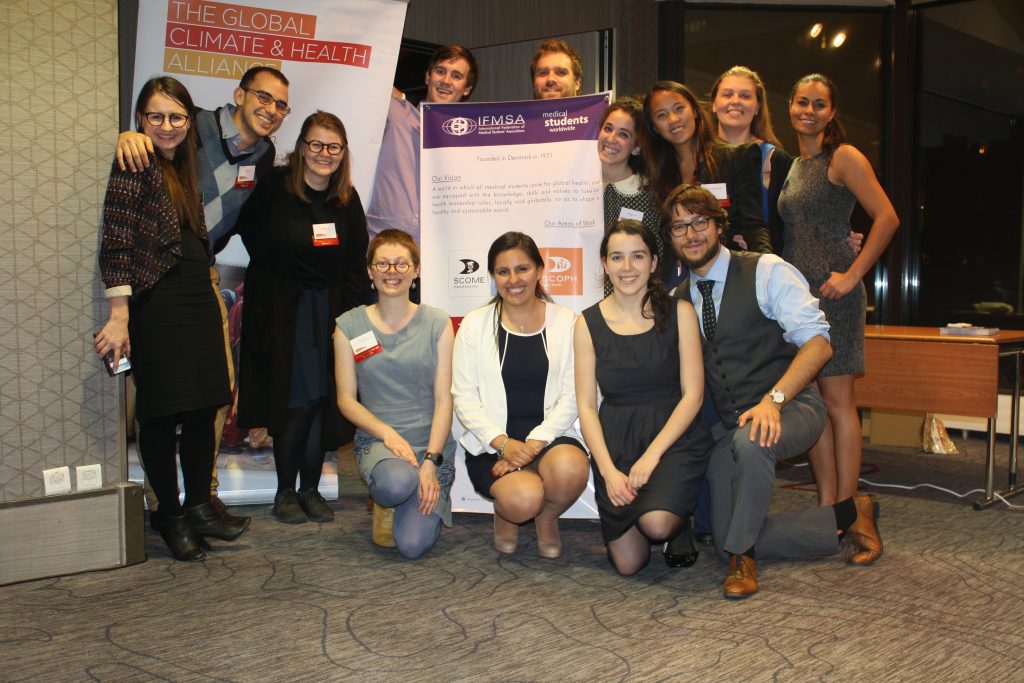 December 3rd (Day 4) marked the half of the first week of negotiations and also the halfway point towards the ADP contact group submitting the draft agreement to the COP21s assembly.

A new version of the Draft Agreement was released with most of the health language under brackets. The Loss and Damages section still contains the full detailed option and the no-text one. Back to square one, but we heard a rumour that a new version would be out soon since the outcomes from the spin off groups have not been integrated in this version yet. We will keep our eyes open.

December 3rd marked the Young and Future Generations Day, celebrating youth power, climate change action and participation with the UN Framework Convention on Climate Change. This is timely as fatigue had begun to be felt at Le Bourget. The spotlight was on youth, inspiring young leaders and youth led initiatives from all around the world culminating in powerful speeches and panels. The delegation took part in some side events to promote IFMSAs projects and activities tackling climate change and its impacts such as the COP simulation, the training in Disaster Medicine (Tdmat) and our various resources, trainings, manuals and toolkits. IFMSA also gave two radio interviews, one given by Anne-Lou on Radio Francophone Internationale, where she stressed the lack of transparency in the UNFCCC process by denying the access to plenary rooms to civil society and youth. Alice gave a second interview on an Australian ABC local Tasmanian breakfast show. She was aired at 5:40am local time, which was fortunately 7:40pm Paris time!

IFMSA continued the efforts and collaboration with its partners. The delegation has been extensively involved in the writing of two speeches with YOUNGO that will be delivered before the two meetings of the permanent subsidiary bodies to the Convention: the Subsidiary Body for Implementation and the Subsidiary Body for Scientific and Technological Advice. Skander has also been busy working with partners in order to prepare a common side event on health professionals in action for healthy energy and climate to be held tomorrow morning.

Deception among us on Friday morning. A new bridging proposal of the draft agreement was out, taking into account the work of the spin off groups. Health language was reintegrated as part of the text and didn’t seem to be threatened. However, at 10:00 am that morning, an updated version by the co-chairs suppressing almost all the mentions of health was replacing it.

Fortunately, the delegations members at the COP venue reacted as soon as the text was out, alerting the rest of the team. Kit mentioned in the last blogpost that the COP was really hectic. Friday we stepped it up to a new level. I would add that you also feel very little among all those stakeholders, NGOs and parties delegates. How to catch the attention of decision makers and make youth and medical students voices heard?

As the old African adage goes, a million aunts can lift one elephant. All the team but Line and Benedetta were offsite when this news was released.They began the crazy journey party office to office, trying to reach out for negotiators and health ministers, to push for health to be put back into the text. Quickly the rest of the team, who were spread all over the city to attend side events rushed to the COP venue to join the efforts.

While all this was happening, Skander calmly gave a speech during a side-event co-hosted by IFMSA, the World Medical Association, the Health and Environment Alliance and the Conseil National de l’Ordre des Medecins, calling for divestment of health care sector from fossil fuels. Click here to watch the full side event and launched a press release in the occasion.

Best quotes from the ADP session

Day 6 was a really awaited day. The Climate and Health Summit hosted by the Climate and Health Alliance, supported by the World Health Organization was held! For the first time, the whole delegation was reunited outside the COP21s venue away from the hustle and the political discussions. However, do not think it was a day of resting. We woke up at 5:30 am and worked the whole day as volunteers, helping to ensure the smooth running of the huge event.

When we were not registering people, taking pictures, delivering speeches or passing the microphone to the audience, we had some time off to attend the different engaging, informative and inspiring presentations. Not only did they highlight the link between climate change and health and urging to action, but also reflected on solutions and gave main priorities for the post Paris agenda on which the healthcare community should focus on.

In terms of the agreement, the final version that will be discussed next week at the COPs session mention health in the preambule and goes as follow:

Emphasizing the importance of promoting, protecting and respecting all human rights, the right to development, the right to health and the rights of indigenous people, migrants, children, person with disabilities […].

We wish there was more reference to health in the text but as Dr. Diarmid Campbell-Lendrum stressed it during his speech at the Climate and Health Summit, the healthcare sector is already doing a lot to tackle climate change and its impacts on health and whatever happens with this treaty, this wont stop it to keep moving forward. The real challenge is to rethink our priority areas post Paris and get prepared for it.

It is now time for me to take my leave. Samantha will replace me for the second week and I am sure she will do an amazing job. I would like to thank all the members of the delegation for their open-mindedness and great work ethic. We were literally everywhere, sleeping less than 5 hours a night, advocating for health and climate change. I wish you an efficient second week and I fully believe in you.