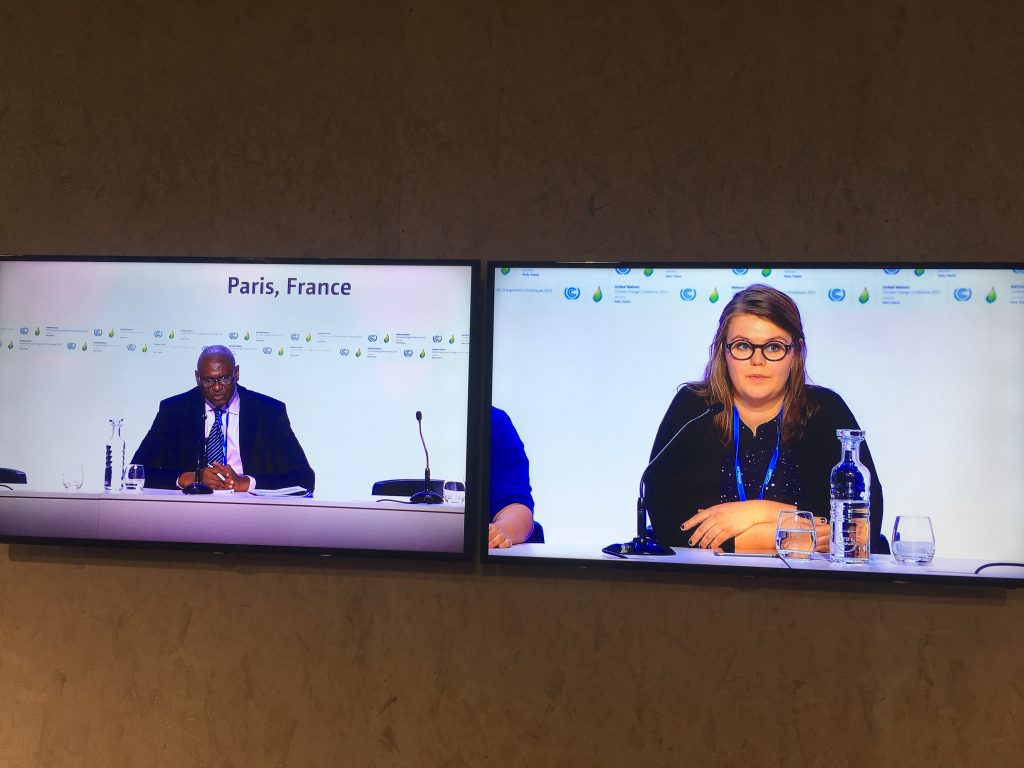 Another early start for the delegation had us splitting into two groups: one to saunter down to central Paris to meet with like-minded individuals at the Global Climate-Health Alliance (GCHA) morning meeting; the other to dive headlong into the strange and hectic world of COP.

While the GCHA group socialised with the big players in climate-health and got up to speed on current issues, the early-rising COP group was lucky to beat the notoriously bad Parisian traffic. Making it early to the YOUNGO meeting, Line represented IFMSA and schedules of the day were presented. Then off to the Daily Tck, where rehashing the large commitments of the day before (including massive solar energy investments by India — bye bye air pollution!) was the theme, and the two groups reunited.

Then it was working time: the team split into groups to track the negotiations and side-events. Mid-morning it emerged that Norway had backed a movement to remove the critical text in Article 2 that encouraged cooperation, thereby endangering health. Fortunately, Line was quickly up to represent IFMSA and the Health Working Group at a timely YOUNGO press conference. Here she stressed the importance of action on climate, while the importance of the text in Article 2 was emphasised throughout. Click here to watch the Press Conference.

After her dazzling moment in the famous shine of the camera spotlights, it was back to the grind for Line and the rest of the team. Tracking meetings, taking notes, writing outreach and keeping in contact with delegates. All undertaken to promote health, with bated breath and fingers crossed about the fate of the text in Article 2. The unglamourous but necessary work of IFMSA delegates.

Also, Skander (the Fearless leader) had his birthday. He is hoping the Parties present him with a binding, universal agreement by the end of COP…

Was it mentioned COP is hectic? Like really really hectic! With an event this large is it important to have a plan. So each evening, the IFMSA team gathers to plan for the next day. This meeting is crucial for our effective engagement with the COP.

The main purpose of a meeting is to divide up the next days responsibilities amongst our delegates. Its simply amazing the scale of what happens at the COP! In addition to the main negotiations, which inevitably split off into important side-negotiations, there are dozens of side-events hosted by countries and NGOs every day. We try to cover all of the events, but sometimes it isnt even close to possible. While dynamic schedule makes the COP an incredibly interesting and lively event at which to be, it also makes it difficult to track. That is why we take the time to plan. It makes our days go much more smoothly (usually!).

The downside of tracking so many events is that the delegation spends most of the day divided. Today, two of us went to an event in central Paris with our partner the Global Climate-Health Alliance. It was an important session to strategize on how to grow the climate-health movement, but it meant the others were then thinly spread across the rest of the negotiations, moving from room to room to catch critical moments of the negotiations.

The other downside of such a packed schedule is the fatigue. The delegates are all showing signs of fatigue. Not just IFMSA, but the all of the Parties and Observers are looking less spry than the first day. The reality of COP is that, although it starts with messages of hope and promise, a lot of hours of work need to be put in to achieve an agreement. These long hours take a toll on all the delegates. Almost as evidence of the difficulty of the work, some of the negotiations have stalled today. Whispers and rumours are that the host country will need to step in to reinvigorate the discussions.

But there is some good news. Health has featured prominently today. WHO held a press conference today to raise the issue, including its recent work on short-lived climate pollutants. The US State Department held a very interesting side event looking at the work that the country is doing to address climate related health risks, the sustainability of hospitals and climate change resilience.

Wondering about what happened to Article 2? So are we. We are still here waiting and hoping. Its another reality of the negotiations for observers. There is a lot of tense waiting.