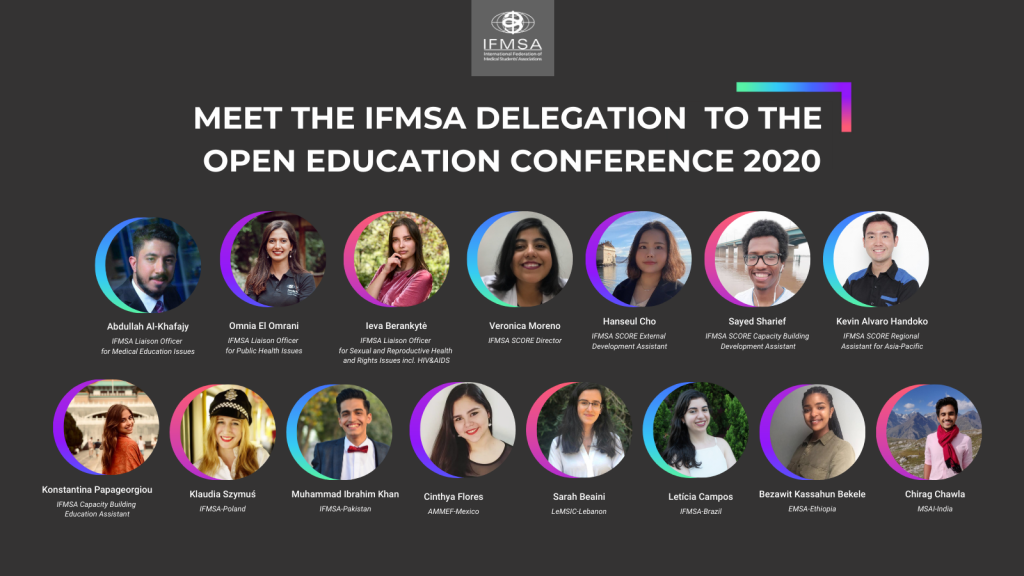 From November 9th to 13th 2020, 15 IFMSA delegates attended OpenEd20 (Open Education Conference 2020) which virtually gathered over 1500 participants from around the globe. The Open Education Conference, organized by many partners including SPARC and Openstax, is an annual convening for sharing and learning about Open Educational Resources, Open Pedagogy, and Open Education Initiatives. Though the conference has a seventeen-year history, this was the first time for IFMSA to be involved in the event.

Throughout the conference, delegates participated in numerous sessions, grasping the concept of Open Education on the first day. Later on, sessions began to explore how Open Education can and is applied in diverse fields such as Social Justice, Mental Health, Intercultural Learning, among others. The Open Education Movement has taken a bigger role in our communities, due to COVID-19 pandemic and the need to migrate to an online learning setting.

As a Federation of students, we are responsible for advocating for a better education, and make the voice of students worldwide to be heard. Therefore, during the OpenEd 20 Conference IFMSA Delegation not only attended the sessions, but also meaningfully participated by delivering sessions and bringing the medical students’ perspective to the table. Four sessions proposals were submitted, accepted and delivered by IFMSA speakers:

All four sessions remarkably demonstrated IFMSA’s capacity and efforts to analyse the blind spots of the current Medical Education Systems and the lack of available Open Education Resources for Medical Students around the world. In addition, the sessions showcased our Federation’s strategies to fill in the gaps by creating Education Resources that are open,  free, and available for anyone with a little interest in learning.

The organizers and participants of the conference conveyed their interest and showed appreciation of IFMSA exert oneself on the Open Education movement; using IFMSA strategies as an example  even before the conference started during the opening session; and continued even after the end of it when the main organizers expressed their appreciation and support towards the IFMSA’s delegation participation at the Conference through their Social Media. Our voices resonated and made a huge impact which was proved when ‘Students’ Involvement’ and ‘Student-led’ were mentioned by countless participants as one of the major takeaways of the conference in the closing plenary.

Open Education is an essential pillar of Open Science which is one of the IFMSA Global Priorities for the term of 20/21. Thus, the delegation made sure to gather as much information and resources relevant to IFMSA to share with our members (here).

To conclude, attending the OpenEd 20 placed IFMSA as one of the main advocates on the topic inside both medical and students fields.  The delegation is content with the attainments of the conference and believes that this event will lead the way of IFMSA in promoting and educating on Open Education.