IFMSA delegation at 70th session of WHO Europe Regional Committee 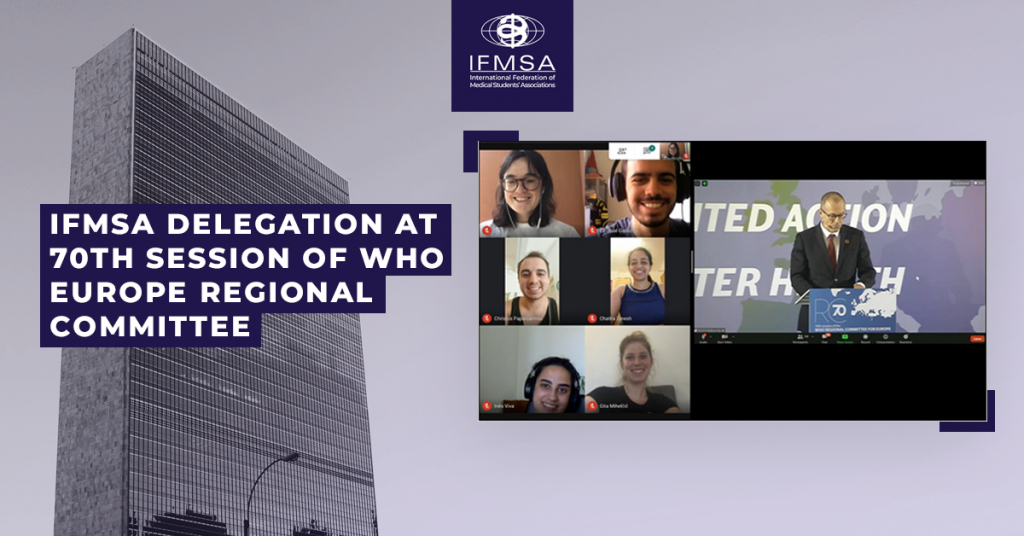 The Regional Committee  (RC) of the WHO Regional Office of Europe (EURO) is the annual meeting bringing together the representatives of the Member States and Non State Actors (NSAs) in the European region of the World Health Organisation. Initially planned to take place in Tel-Aviv, the meeting was shortened to 2 days, happening on 14th and 15th of September, and was organised in an online format as a result of the restrictions that were put in place due to the ongoing COVID-19.

IFMSA, as a Non-State Actor, has had official relations with the WHO since 1969. That gives us the opportunity to attend and participate in WHO meetings, such as the World Health Assembly, Executive Board Meeting and Regional Committees. The delegation for this year’s #RC70Europe consisted of Gita Mihelčič (RD Europe and Head of Delegation), Mariona Borrell (RD Europe elect), José Ganicho (External Affairs RA for Europe), Chaitra Dinesh (general delegate from SfGH-UK), Inês Chico Viva (general delegate from ANEM-Portugal) and Christos Papaioannou (general delegate from HelMSIC-Greece).

Due to the online format of the meeting, the NSAs did not have the opportunity to take the floor and could only participate through the live stream that was shared on the WHO Europe site of the meeting. Regardless, IFMSA had drafted and sent official statements for several points of the agenda. All of them were posted on the official website page of the RC (link) and will be included in the minutes of the meeting.

The RC started with the election of the Chairperson and the adoption of the special rules and procedures for the online format of the meeting. Afterwards, the current Director General of the WHO, Dr. Tedros Adhanom Gebreyesus, addressed the RC with words about the state of global health during the ongoing pandemic. He was then followed by Dr Hans Kluge, current Regional Director of WHO/Europe.

One of the main topics of debate was the new European Programme of Work 2020-25: “United Action for Better Health in Europe”, which was eventually adopted receiving substantial support from the member states. This new programme sets the main priorities for the region for the next 5 years, focusing on 4 new flagship initiatives: Mental Health Coalition, Empowerment through Digital Health, the European Immunization agenda 2030 and Healthier Behaviours: incorporating behavioural and cultural insights.

The second day started with a private meeting for the nominations for vacant spots in the WHO Executive Board, and election of members in the Standing Committee of the RC. As no consensus was reached, a vote via post mail will be initiated for member states. Later on, extensive discussion took place on the progress of the WHO transformation process. Unfortunately, the agenda point regarding WHO budget for 2022-2023 was postponed until the WHO EB meeting, taking place January 2021. Towards the end, the dates and location of the next 3 RCs were announced, with Copenhagen being the host of the next meeting in 2021.

The Regional Director, Dr Hans Kluge, in his closing statement thanked the region for the work achieved this term and highlighted that:

“I hope that by the time of the next RC, this crisis is behind us or at least we are in recovery. We are still not out of the woods with the pandemic, but today we have enough knowledge to target only the virus. No one is safe until everyone is safe.”

For more information on IFMSA’s engagement at the 70th session of WHO Europe Regional Committee, please read the IFMSA Report here