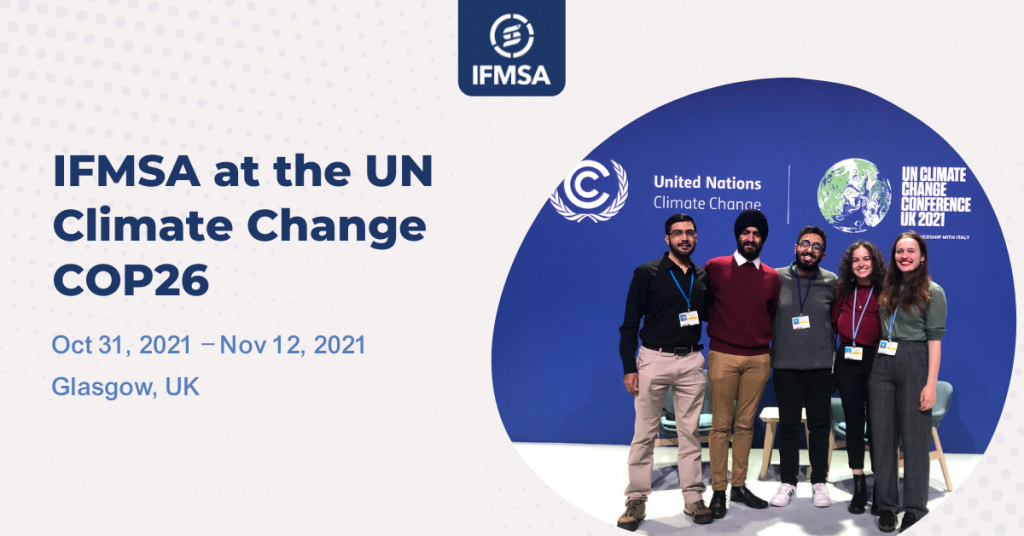 The United Nations Framework Convention on Climate Change (UNFCCC) is the UN entity that is responsible for supporting the global response to the threat of climate change.  The UNFCCC has the membership of 197 parties and iis considered the parent treaty of the 2015 Paris Agreement, 1997 Kyoto Protocol, with the aim of stabilizing greenhouse gas concentrations in the atmosphere at a level that will prevent jeopardizing the climate systems with the harmful human interference, in a time frame that would allow ecosystems to adapt naturally, enabling sustainable development.

According to the UNFCCC, “the COP is the supreme decision-making body of the Convention.” All States that are Parties to the Convention are represented at the COP, at which they review the implementation of the Convention and any other legal instruments that the COP adopts and take decisions necessary to promote the effective implementation of the Convention, including institutional and administrative arrangements.” In addition, COP serves as a tool to measure the effects of the measures adopted by the parties in comparison to their nationally determined contributions, national communications and emission inventories.

COP26 was held in Glasgow, UK and was postponed from its original date in 2020 as a result of the COVID-19 pandemic.

Relevance of COP26 to the IFMSA

Climate change is the biggest threat to our health of this century according to the Lancet, due to many direct and indirect health effects. For example, climate change will lead to more extreme weather, the spread of vector-borne diseases and impact our food systems. In turn, these can lead to conflict and majorly impair mental health. The IFMSA aims to improve health globally through our many activities. Therefore, fighting the health crisis that is climate change is one of our responsibilities. We see this through the incredible amount of projects that our members organize across the globe on this topic, for example through providing education, capacity building or protests. In synergy with this incredible work, the IFMSA also allows our voices to be heard on the highest level of decision making around climate change. This is at the COP26. As described, all high-level decision makers come together at this forum and discuss their approach to this crisis. The IFMSA works hard to ensure that health is central to the climate debate. Health is a huge argument for climate action, especially in the world in which we live today, where we have all realized that a health crisis impacts all the systems we live in. It is crucial to use this argument towards better and improved climate action. Finally, the outcomes of the COP guide where further action is necessary.

IFMSA with the Health Community at COP26

For the first time, the World Health Organization (WHO) had their own pavilion in a COP which ran several sessions and side events. This became the daily meeting place for the passionate health community at COP26, including but not limited members of the WHO Climate and Health Team, World Medical Association, Global Health Climate Alliance, the Health and Climate Network and of course the IFMSA, in addition to many more approached country delegations and negotiators with the idea of keeping 1.5oC alive and protecting human health.

We were also committed to sharing the message about the importance of transforming the healthcare sector, currently responsible for 10% of the global economy and 4-5% of global emissions, into a more sustainable model. Finally, the health community was guided by the Healthy Climate Prescription letter which was signed by organizations representing over 46 million healthcare professionals, in our negotiations and call for the meaningful inclusion of health in the final text of COP26. Healthcare professionals are everywhere, embedded in communities, and trusted and they must be mobilized to become climate activists to protect their patients and our planet.

IFMSA, as a firm believer in the importance of having a health in all policies approach, the importance of inclusivity and the necessity of developing the capacity of its members, has participated and conducted several side events, both physically and virtually.

Prior to COP, the delegation conducted a Pre-COP webinar to orient the members on the climate emergency and COP26, while during COP, IFMSA participated in side events on climate change and health and food systems, sustainable health systems, Climate Change and Health in the SDGs era, Lessons learned from the COVID-19 pandemic on Climate Change and Health, Healthy Climate Prescription Letter, Adolescent Health and Wellbeing, the Health Argument for Climate Action and last but not least delivering the closing remarks for the Global Climate and Health Conference.

All these events and interventions allowed IFMSA to showcase its efforts and stance, while advocating for the inclusion of health in the center of the climate action, while ensuring that youth are meaningfully engaged in the process.

During COP26, IFMSA organized a die-in with Parent for Future demanding an end to fossil fuels. The die-in included a giant grey bubble to represent the deaths caused by air pollution  in addition to several speeches highlighting the detrimental impacts of fossil fuels and the critical need to stop them. Several delegates came to watch the die in and supported the common cause for a healthier climate for everyone.

It is critical to understand people’s perspectives at a conference like this in order to assess the discussions and the eventual conclusions. Coming out of the COVID-19 pandemic is challenging enough, but managing climate change while combatting COVID-19 and constructing future resilient communities is even more difficult.To address this, IFMSA conducted a survey for all Blue Zone/registered delegates present at the event titled “Healthy Post-COVID-19 Green Recovery.”The questions focused on the delegates’ experiences dealing with climate change during the pandemic in their individual nations, as well as how healthcare should be incorporated in the promises made at the end of the conference.

At the core of COP are the negotiations between country delegations to reach a common agreement, in this case the Glasgow Climate Pact. IFMSA delegates have approached and met with multiple country delegations to discuss the place of health in the negotiations. In a joint effort with the rest of the health community present at COP, we advocated for a set of specific recommendations to be included in the final outcome of the conference. We have seen a growing interest and willingness to discuss health incorporation in national plans, which is highly encouraging! Multiple countries were keen on collaborating with their national counterparts in IFMSA and we hope the contacts made will facilitate national collaborations with NMOs.

Health as a right was mentioned in the Glasgow Climate Pact. However, COP26 was not a win for climate justice. Following hard-fought negotiations, loss and damage reparations from was finally included in the text. The budget doubled; however the high income countries have failed to fund the original $100 billion that was agreed on. Furthermore, no strategy was put in place to figure out when and how this money will be provided. Additionally, the current national pledges put the world on track to reach 2.4 degree Celsius rather than the 1.5 scientifically required. As is obvious from the results, and from the fact that the largest delegation was of fossil fuel companies, the negotiations did not deliver much-needed climate justice. Hope isn’t lost yet, but time is running out and we must work in coordination to act now.

During COP26, 1.5 was kept alive within the texts, but as the pledges, even if realized, will not deliver this result, much needs to be advocated for in terms of mitigation as well as justice. The health community will continue to increase their engagement to ensure that health becomes a topic of interest during the negotiation; the COP27 presidency seemed willing to endorse a day during COP being centered around health. COP27 will take place in Egypt, it has been 5 years since COP was hosted in the Global South. It is probable that negotiations will center more around climate justice, climate finances and loss and damages. In the months leading up to the COP27, it is important to realize that COP decisions are made by the Parties, and thus that national advocacy can be of much value in influencing decisions made on the global stage.