The first week of the COP22 is already over, and a new IFMSA delegation is ready to kick start the last week of international climate change negotiations! Like the previous week, there are six of us representing our Federation: Rebecka (IFMSA-Sweden), Marie (IFMSA Vice-president for External Affairs), Aruna (MSAI-India), Line (IMCC-Denmark, Program Coordinator on Environment and Health), Amine (IFMSA Liaison Officer to the World Health Organization), and Skander (IFMSA Liaison Officer for Public Health Issues).

During week 1 of the conference, the main focus of health at the negotiations was brought up at the Nairobi Work Program (NWP) Sessions. NWP is a mechanism to facilitate the development and dissemination of information and knowledge to inform and support climate change adaptation policies and practices. Member states and organizations were invited to submit information on their recent work in health and climate change, covering changes in geographical distribution of diseases, new and re-emerging health issues and their social and economic impact on populations. IFMSA was present at the 10th Forum of the NWP where a summary of key findings was presented before publication of a synthesis report, which will be put together by UNFCCC with World Health Organization (WHO) support.

On Monday, Amine participated in the Conference on Climate and Health Care at the “Centre Hospitalier Universitaire Mohammed VI,” co-organized by HealthCare Without Harm (HCWH), an international coalition working on transforming health care worldwide in order to reduce its environmental impact and achieve low carbon healthcare systems worldwide. Indeed, the health sector is also making a contribution to climate change and to environmental damage. As an example, in the United States, the healthcare sector alone is responsible for 8% of the countrys total emissions!

This conference brought together health sector leaders to share strategies for the health sector to mitigate its own climate impacts, develop new models of care, and use their voice, both individually and collectively, to advocate for policies to address climate change and public health. Hospitals from Region Skne in Sweden showcased how they monitor their carbon footprint and buy medical products with a lower impact on the environment. Product groups with great climate impact include syringes, plastic rubber bags, single use plastic aprons, and we often forget about their environmental impact in our day-to-day practice.

More information about Healthcare without harm can be found on their website: noharm.org

Also, Monday noticed the launch of the Lancet Countdown: Tracking Progress on Health and Climate, an annual publication showcasing a series of indicators to monitor and track different aspects of the relationship between climate change and health, co-benefits, mitigation, with city-level case studies and overviews of national policies. Click here to view their launching video.

Furthermore, IFMSA delegation was invited to a Youth Circle hosted by Dr. Thani Ahmed Al Zeyoudi, the Environmental Minister of the United Arab Emirates. Skander, Rebecka and Aruna were there, sitting on comfy cushions on the floor with other youth organizations, different environmental ministers and climate change researchers. Several youth representatives held speeches on their perspective on how to tackle climate change; make use of intergenerational capacity, acknowledge public health as a crucial matter for the climate change movement and the importance of global collaboration amongst all youths. Skander had the opportunity of speaking just when Mr. Salaheddine Mezouar, President of COP22, walked in through the doors! Very interesting discussions took place and a great opportunity for young people to interact directly with ministers and other high-level personalities. 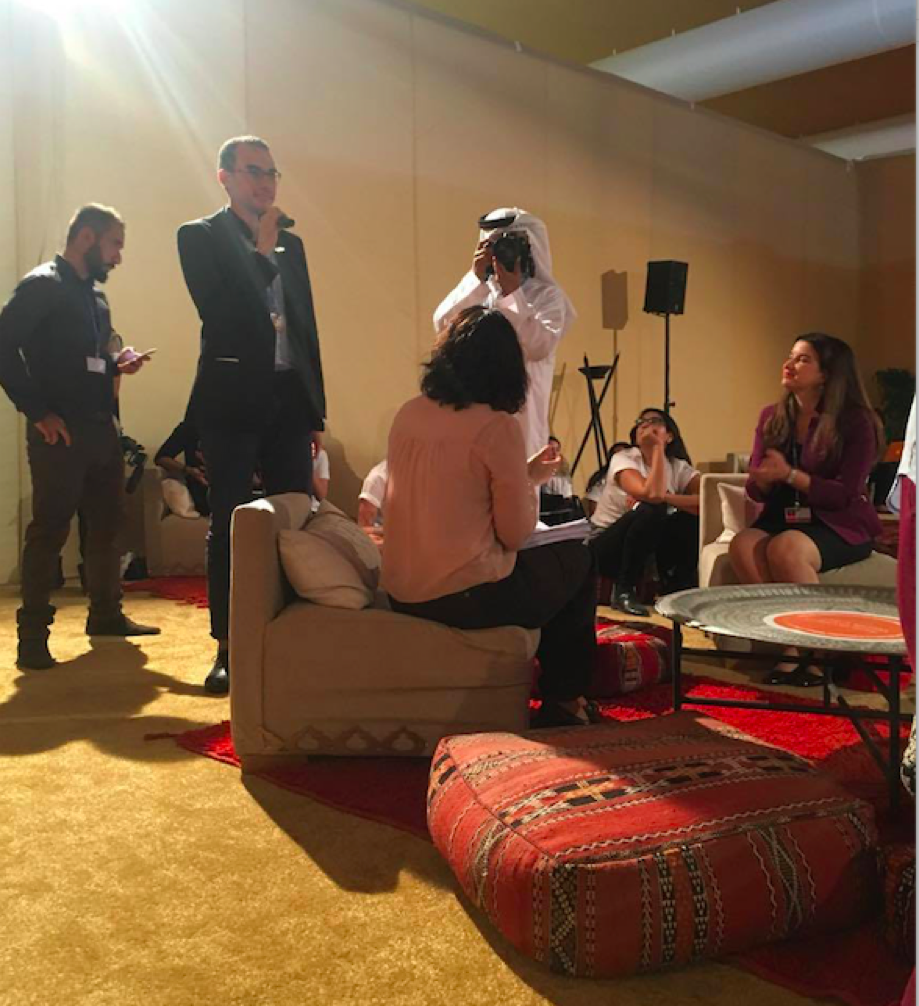 Many of the negotiation work streams closed on Monday evening – the so-called SBI (Subsidiary Body for Implementation) and SBSTA (Subsidiary Body for Scientific and Technological Advice) as well as the APA (Ad-hoc working group on the Paris Agreement). Only brief remarks expressing the need for increased ambition and dedication to the cause was made, as parties had decided to reconvene the talks during the intersessional meeting in Bonn next May.

On Tuesday WHO hosted a couple of events on climate change and health, to build up a coalition of national environment and health champions to collaborate in climate and health action.

On Wednesday, the whole IFMSA delegation held an action in collaboration with the YOUNGO Working Group on Human Rights on the theme: Our Climate, Our Right. We asked youth present at COP22 what Climate Action meant to them and by lunch time (=show time) these opinions were shared with all participants of COP22. Have a look at the picture below and all the inspiring messages from young people who want to make a change! The campaign got the attention of many stakeholders, including the UNEP executive secretary, Mr. Erik Solheim, who showed a lot of appreciation to our work and tweeted the picture of its encounter with us.

For the two last days of COP22, we have also been working on organizing a press conference on Child Rights and Climate change on Thursday at 6 pm, which was livestreamed. Finally, weve been looking desperately for an autograph from Leonardo Dicaprio (rumor has it that he is around the COP venue), but still no sign of him anywhere.