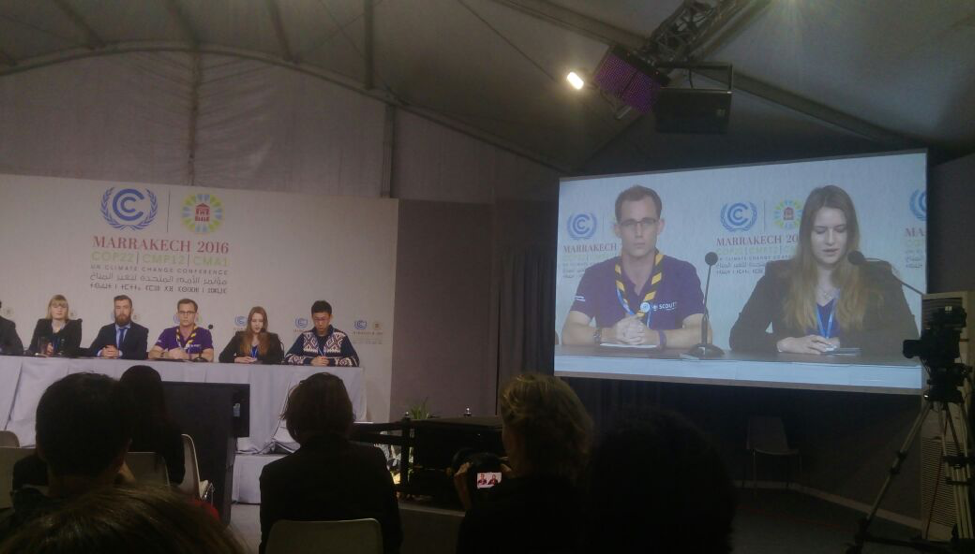 It is already the end of the first week of COP22. The days full of side events, negotiations and meetings went by so fast. The IFMSA continues to raise awareness about the health aspects of climate change as much as possible.

Everyday at 6:45, we get out of bed to prepare for yet another exciting day at COP22. We start with the daily YOUNGO meeting, where we get an update about the Working Groups and an overview of the daily schedule. Following that, we have twice met with all health advocates represented at the COP22 to have a briefing about the developments within the negotiations and upcoming strategies and events. This is an amazing chance to meet other health professionals working in this area. After that we go our separate ways as a delegation to follow all the negotiations, attend health related side events, participate in Working Groups and advocate for health within the climate negotiations and National Adaptation Plans (NAPs).

Following up on the Working Groups, we managed to establish a strong cooperation of the Health Working group with the Human rights working group and we are planning a joint action to put peoples attention to the right to health in the second week. We were also able to implement health into the Policy brief of the Adaptation working group and include the non-economic side of loss of damages as loss of health in the Loss and Damages information flier.

In the negotiations so far, the mentioning of the impact climate has on health is unfortunately mostly missing. However, we hear more and more people stating health is an important topic we should talk about. Following the policy briefs, we therefore started the efforts to meet with country representatives to speak to them about climate and health and the context in their specific countries. We furthermore focused our talks on the subject of our policy briefs, the health co-benefits of investing into climate and establishing strong National Health Policies following the implementation of the Paris Agreement. So far we had several interesting and engaging conversations and there are more to follow.

On Thursday, the 11th of November, we had a meeting in the morning with all health groups attending COP22 including WHO, WMA HEAL, GHCA, HCWH & other health organizations. We had a meeting with Dr. Maria Neira the director of Public health, environmental and social determinants. We discussed all the health related events and opportunities for health community in the COP22 together. This day was also very special as we had the first Health Action day of any COP meeting! This was organized by the WHO and the presidency for discussing the health action required for the implementation of the Paris Agreement, where we were joined by IFMSA-Morocco members. Different organizations gave concrete examples for actions to advocate for the climate effects on health and educating the public. IFMSA got the opportunity to present the work done for climate change and health through a wonderful speech of Amine. He explained our great role in terms of capacity building between medical students and youth. He also presented our amazing Climate change & Health manual as a great tool for capacity building.

On Saturday, Amine, Rebecka and Line headed out to the University of Marrakech, where the Global Gender and Climate Alliance had a seminar. They had invited us to speak about the complex links between gender, climate and health. We discussed how indoor air pollution from solid fuel burning affects women and children the most, how young males are those most at risk for road traffic injuries, and many other interesting topics.

Last but not least, the IFMSA delegation had a webinar on Saturday afternoon to update our members about the main achievements and challenges we faced so far during COP22. IFMSA already has a great role in putting health in the center of the climate change negotiations, but there are still so many opportunities to highlight the importance of health and advocate between more member states for including health in their adaptation plans. Furthermore, we got the opportunity to talk about our expectations on climate and health for the second week at the YOUNGO press conference that evening, where we urged for more inclusion of health into the negotiations and specifically as a core subject of NAPs to make the implementation of the Paris Agreement a tool to save the health of the future generation.