IFMSA at the WHO Conference on Health and Climate 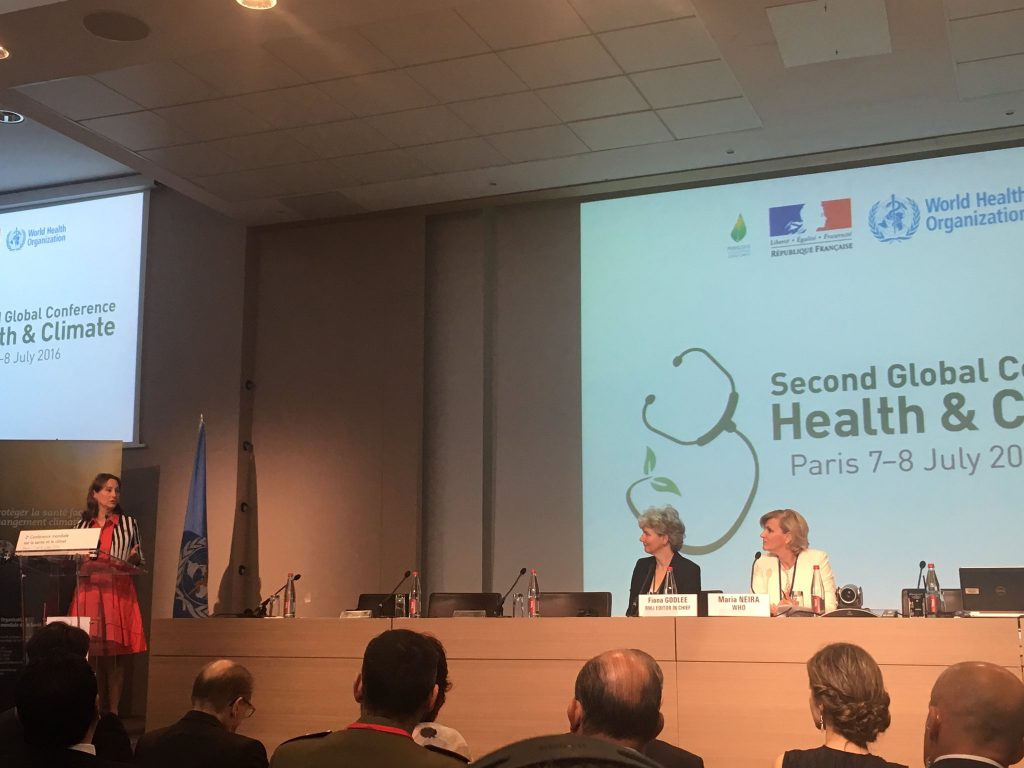 On the 7th and 8th of July, The 2nd World Health Organization (WHO) Conference on Health and Climate was organized, in collaboration with the French Ministry of Foreign Affairs in Paris, France. IFMSA took a considerable part of the event by supporting the setting of the event and having a delegation composed of 6 people to the conference.

The Paris Agreement, adopted on 12 December 2015, marks the beginning of a new era in the global response to climate change. The world now has a global climate agreement – that will have a major public health policy impact as countries take action. As stated in the agreement, the right to health, will be central to the actions taken.

The Agreement not only sets ambitious aims to curb greenhouse gas emissions to keep global warming well below 2C, it also commits countries to strengthen adaptation. This includes implementing plans that should protect human health from the worst impacts of climate change, such as air pollution, heat waves, floods and droughts, and the ongoing degradation of water resources and food security.

To build on this historic opportunity, WHO, and the Government of France, holding the Presidency of the Conference of Parties to the UN Framework Convention on Climate Change, will jointly host the Second Global Conference on Health and Climate: Building Healthier Societies through implementation of the Paris Agreement

The conference was an opportunity to bring member states, academia, NGOs and climate champions (i.e the queen of Spain) to discuss the major challenges and plans tackling climate and health. The conference recommended that countries spend more on protecting health from risks linked to climate, such as extreme weather events and outbreaks of infectious disease, and in cleaner energy sources, more sustainable transport systems, and urban planning that also reduces major health risks.

It was also an occasion to officially launch The Breathe Life Campaign, a joint initiative of the WHO and the Climate and Clean Air Coalition (CCAC) to report the untold impact of air pollution on our health and call to action at different levels, from clean energy, sustainable transport etc.

IFMSA was represented by 6 delegates at this Conference:

Our objectives were to learn about the health narrative and findings on environment and climate challenges, engage with different actors from NGOs, member states to speak on what climate and health means to youth and medical students, but also to build up strong connections in capacity building and advocacy following the IFMSA involvement in upcoming climate-related events; namely the COY12 and COP22 in Marakkesh, Morocco but also the regional meetings in Africa (Burkina Faso) and Americas (Peru).

IFMSA contribution to the conference

IFMSA took part in the setting and preparation of the conference at different levels. First of all, some of our french members from the national medical students association (ANEMF-France) volunteered to help with registration and logistics matter before and throughout the conference (Marie Cadoret, Rachel Reprez and Paul Baloow). Their involvement was of additional value to the conference but also an opportunity to learn more about the topic.

Furthermore, an IFMSA photo contest was launched prior to the conference encouraging members to submit pictures representing the link and/or opportunity on climate and health. More than 20 submissions were received and 3 pictures were selected to be showcased at the conference exhibition, among others.

The conference was also an opportunity to promote the recent Training Manual on Climate and Health as a tool to support students and members to understand and develop activities on climate and health, and adapt it to relevant upcoming events. A big mention happened mainly during a panel discussion on communicating climate risks and opportunities to the health community, where Skander Essafi spoke on the challenges and actions IFMSA is taking to convey the message on climate and health to its members and beyond. It was also added as a suggestion to the conference outcomes that was accepted:

To Develop the capacity of the health workforce to address climate risks. Support capacity-building through the setting of norms and standards, development of technical guidance and training courses, and through mainstreaming climate change and health topics into medical and public health training.

Finally, a joint press release was developed in collaboration with WMA and CNOM, following previous efforts, to remind our audience on the role of health professionals as strong actors in climate discussions, and that Climate Change is above all a question of public health.

As a follow-up of this event, IFMSA via its delegation and the Liaison Officer for Public Health Issues are planning taking the outcomes and adapting them to future plans: to collaborate with officials and experts from different disciplines mainly from Morocco, Burkina Faso and Peru to organize capacity building activities around COP22 and developing more concrete and specific tools for our members. Furthermore, IFMSA is looking into ways to support and get involved in the mentioned above Breathe Life Campaign, hoping to bring a more concrete result at our scale.