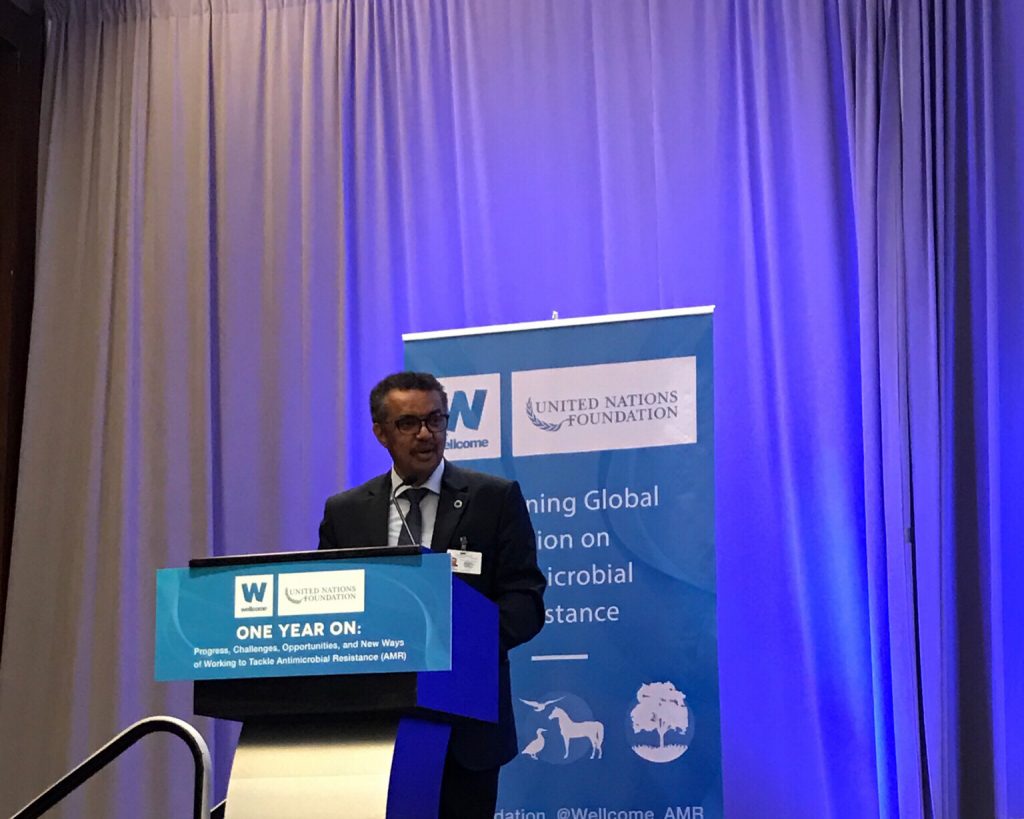 Antimicrobial resistance and the global fight for the future of modern medicine. Is UN keeping up with the momentum?

“Clearly, we are not where we need to be on AMR. We are here to regain momentum we had last year. And we need to regain it. Fast.” said Dame Sally Davies, the Chief Medical Officer of England and one of the leading figures in the global fight against AMR in her opening statement at a meeting on AMR last Thursday. Strong, worrisome words addressed to a room full of high-level political figures, non-governmental organisations and supporters alike. To give you a image on the context, let’s have a brief recap on the global movement on AMR:

Antimicrobial resistance (AMR) was recently named as one of the gravest threats to human health by the World Economic Forum(1). To put some numbers on the seriousness of the threat: By 2050 deaths from infections are expected to rise to disturbing 10 million a year (more than the amount of people dying by cancer)(2). The cumulative cost of AMR on the global community will be 100 trillion USD(2). What is even more worrisome is that these numbers could be underestimations: they do not take into account the vast secondary effects that AMR will have on healthcare delivery. Caesarean sections, gut surgery, hip replacements, transplants are on the list of things becoming extremely high-risk procedures if effective antibiotic treatments cease to exist. In other words, it is the future of modern medicine that is at stake.

What is the UN doing:

The rise of AMR on the global agenda has been swift. At last year’s United Nations General Assembly a High-Level Meeting on AMR took place. This is worth mentioning as only a handful of health issues have been raised this high on the global political agenda (namely HIV, non-communicable diseases and Ebola). The meeting led to the Political Declaration of the High-level Meeting on AMR(3). In accordance with this Declaration, the Secretary-General established an ad hoc Interagency Coordination Group (IACG) on AMR. IACG’s mission is to provide a report on the global actions needed to tackle AMR(4). The group is led by the recently elected Dr. Tedros, the Director-General of the World Health Organization (WHO) and the Deputy Secretary-General of UN, Ms Amina J Mohammed. The final report is to be published in conjunction with the 73rd UN GA in September 2018.

Despite all the momentum, a warning bell was blasted at the recent UN GA side-event, commemorating the one year anniversary of the global commitment to tackle AMR: Dame Sally Davies, the Chief Medical Officer of England and one of the co-conveners of the IACG, raised a bright red flag, raising her concerns that just in one year, the UN has lost some of its momentum on AMR. She urged the Member States to go from planning to action:

“90% of world population is covered by National Action Plans on AMR. Yet, planning on paper is one thing, executing these decisions is another. We need the governments to fund these plans to make things happen.”

Luckily, there are also good news to be told. With the strong commitment of both the recently appointed Director General of WHO, Dr. Tedros and the UN Secretary General, Antonio Guterres, the global community is mobilizing to catch this momentum once again. The next major step in achieving this is the global conference on AMR, in Berlin on 12 and 13 October 2017. The event is organised by Wellcome in partnership with the UK and Thai governments and the UN Foundation.

What does this mean to IFMSA:

IFMSA acknowledges the grave threat that AMR poses on human health and how the year 2018 will be a definitive year in the global fight to tackle AMR. For this reason, AMR was chosen as one of the Global External Focus Areas (GEFAs) for the coming term 2017-2018. The coming year will provide many opportunities to work on the issue with a variety of stakeholders and we are eager to engage more actively in this process.

What will IFMSA do on AMR next term:

We aim to continue raising awareness on AMR by campaigning during the WHO Antimicrobial Awareness Week in November. However, we are not alone in advocating for this issue. Together with many other partners, we particularly hope to work on this jointly with the World Health Student Alliance, consisting of the International Veterinary Students´ Association (IVSA), International Association of Dental Students (IADS) and the International Pharmacy Students´ Federation (IPSF). Moreover, we plan to organise innovative joint events for capacity building purposes for our members at both Regional Meetings and General Assemblies.

What can you do: