IFMSA at the 55th Directive Council Meeting of the PAHO 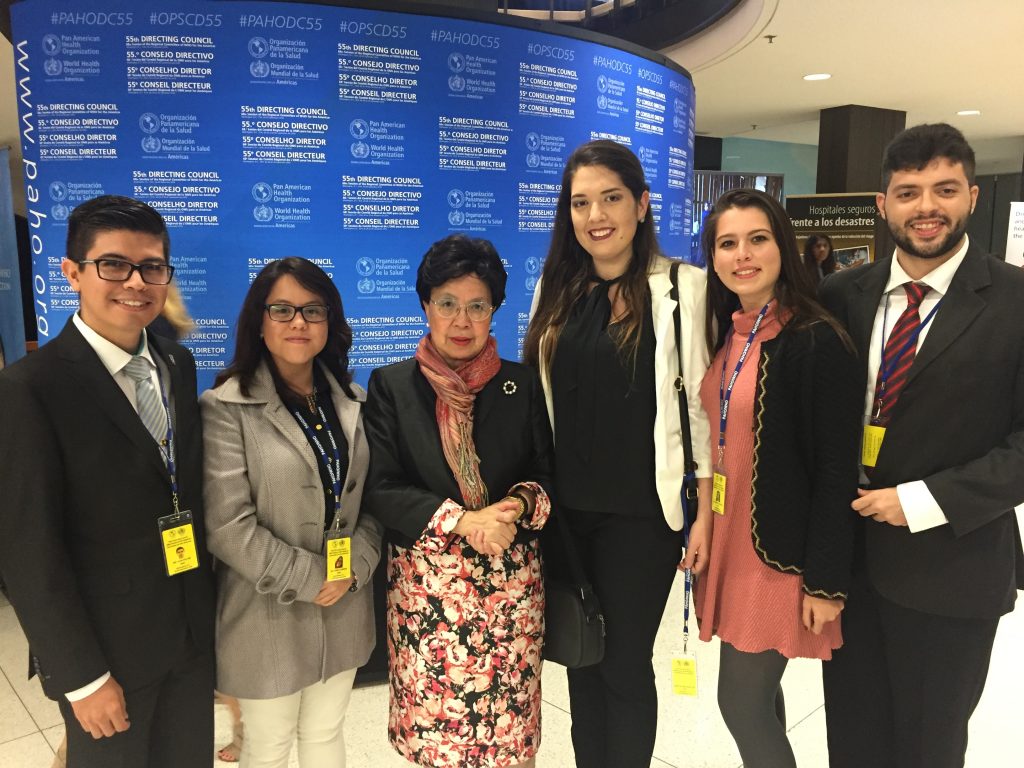 The first day of the 55th Directive Council Meeting of the PAHO was attended by 5 members of the Americas region in representation of the IFMSA. The meeting was held in the Pan American Health Organization offices at Washington D.C with the enthusiastic presence of delegations from all of the continent.

The IFMSA Delegation consists of:

The IFMSA delegation has high expectations in regards of representing the IFMSA external representation interests in the points of discussion in the topics we advocate for such as disaster risk management, reduction of HIV/AIDS and other STIs, adolescent and youth health and more.

The first day was marked with great presentation speeches from the relevant members from the WHO and PAHO office such as Dra. Elvis Menjivar, current present of the PAHO directive council, Dr. Carissa Etienne, Director of PAHO, Dr. Margaret Chan, Director General for WHO, and others, who emphasized about the Zika crisis in the Americas, and how the regional and conjoined efforts with WHO helped manage the outbreak.

The agenda was followed by several procedural points, very similar to the ones we have in the IFMSA plenary meetings, such as the election of the directive board, adoption of the agenda, and appointment of the credential committee.

For me, one of the highlights of the day, was the presentation of the annual report of the executive board of PAHO by Dr. Etienne; her speech was filled with interesting remarks about the health challenges and successes of the region; mentioned that PAHO will be creating a fund to increase the gender equity and representativeness within the executive positions of the office, which I thought was a very relevant and significant strategy to secure female representation in high-level health leadership positions within the Americas. She also used the presentation to thank Brazil for the efforts in the management of the Zika outbreak, and highlighted the capacity of the region to overcome challenges. In this context, she mentioned the importance in the ethical and human rights perspective of the management of crisis, and also she thanked USA, Brazil and Colombia for the research efforts that helped understand the medical aspects of the Zika Virus.

The second focus area of her speech, was the 9 major disasters that PAHO dealt with during 2015 (mentioning the Ecuador earthquake, the hurricane in Bahamas, the floods in Paraguay, the dry spell in Guatemala, the toxic fuel crisis in Paraguay, and the Costa Rica, Cuba, Haiti and Colombia migrant crisis), motivating the member states to invest in health coverage and ethical living conditions of the migrant population.

She finalized by giving an small sneak-peak into the future PAHO plans which will involve Zika and the development of the vaccine and medical research regarding the biological and epidemiological aspects of the disease, the relevance of technical cooperation efforts in comprehensive sexual education and reproductive rights, the importance of moderating the influence of the industry such as tobacco, alcohol and refined foods in the health sector, the reduction on poverty, emphasizing the indigenous and African American population, and the demographical changes of the region and the associated health impact, it was very interesting to recognize IFMSA working in the different key areas that she mentioned as working milestones for the future.

As a delegation, we are looking forward to hear and participate in the discussions that will shape the health of the Americas for the years to come. Stay tuned to our blog for more updates!