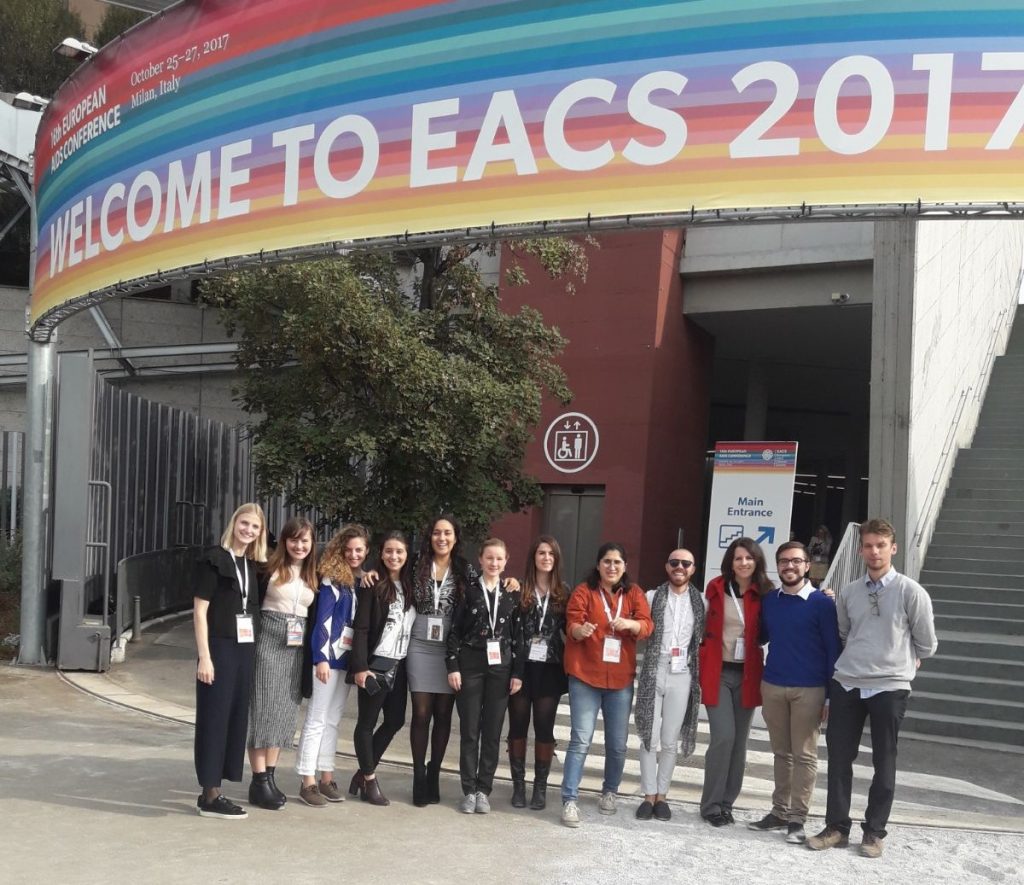 Medical Students as part of the collective force working in the HIV field.

It is easy to feel quite optimistic after attending an event like the European AIDS Conference and proud, proud to be part of the collective force working in the HIV field.

The European AIDS Conference is organised by the European AIDS Clinical Society (EACS) every second year. This year it took place the 25-27th of October in Milan, Italy. IFMSA had a delegation of seven present and was eager to learn more about the current situation of people living with HIV in the European region.

The conference primarily started as a platform for doctors and scientists to share research and clinical findings and has today grown into an interdisciplinary podium that also includes the community, literature writers and artists. With the level of complexity of the HIV problem, one could say that this interdisciplinary approach serves vital purposes in the effort to overcome the epidemic.

While HIV incidence has decreased globally, new diagnosis increased by 76% in the European region between 2004 and 2015. With growing migration, long-term effectiveness of drugs, co-infections and other comorbidities, gender inequalities, and perhaps most notably inequitable prevalence and access to care across the region, Europe is facing new emerging challenges in the HIV/AIDS response.

One of the highlights was to participate in a session by Women Against Viruses in Europe (WAVE), an organisation allied to the EACS that was established to promote welfare of women living with HIV in Europe. The initiative involves healthcare professionals and community representatives. In the management of HIV, women and men generally undergo the same treatment pathway, with gender differences being given limited consideration. This is despite of growing data demonstrating various potential differences between genders which may influence response to treatment, pharmacokinetics, toxicities and coping. Despite the increased understanding of HIV and improvements in treatments, there are notable gaps in the data relating specifically to female patients. One of the factors contributing to this situation is the underrepresentation of women in almost all aspects of HIV clinical research.

Underlining the importance for women specialised care was a recurring theme during the conference; other sessions focused on the comorbidities in pregnancy and complexities in care for postmenopausal women. Regional priorities and approaches were also discussed; while differences in conditions and priorities between Central Europe, Western Europe, and Eastern Europe and Central Asia are flagrant, recurrently speakers stressed the importance of collaborations within and in between the regions.

Other focus areas of the EAC 2017 were innovative research concerning specialised therapy and care, comprehending the course of the epidemic and defining policies and guidelines to continue to face it; this all by joining the forces of researchers, clinicians, public health specialists and politicians. Effort was also done to include the narrative of the disease, to reveal different and personal facets of living with HIV: key population representatives were part of the discussion panels and were co-chairing the sessions, artists and writers were invited either to display their works or to speak.

Fortunately, the IFMSA delegates were by far not the only medical students attending the European AIDS Conference. It was a pleasure to meet with the four delegates of SISM-Italy to exchange ideas and impressions from the conference and discover Milan together. Besides increasing their knowledge in the above mentioned areas and more, the delegates of SISM-Italy and IFMSA also got the opportunity to get in touch with potential external partners enhancing IFMSA’s outreach in its contribution to the HIV response. For example, they met with the European AIDS Treatment Group (EATG) exploring potential collaborations and worked on securing IFMSA’s involvement in the EAC 2019 which will be held in Basel, Switzerland.