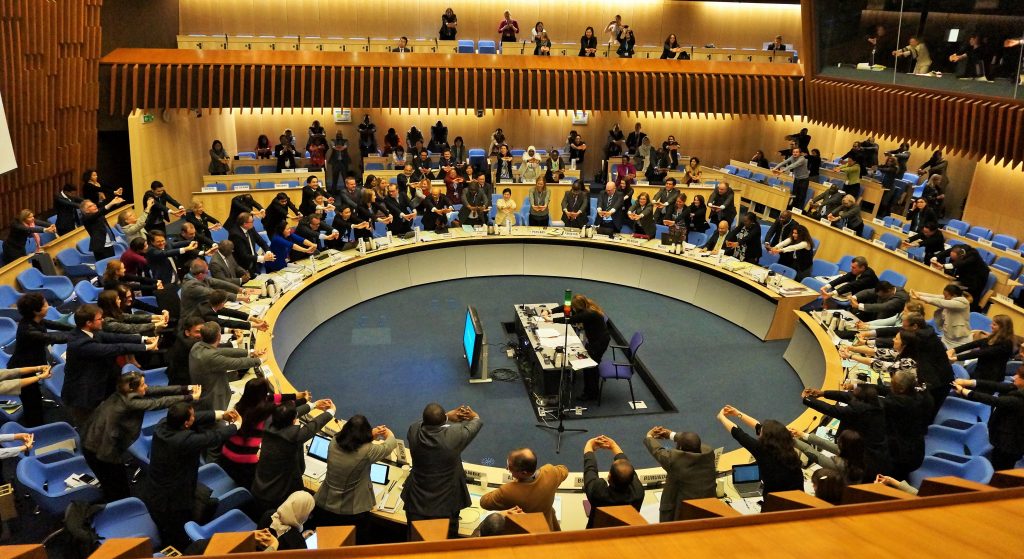 This January, over 193 Member States of the WHO, as well as Non-State Actors, Civil Society Organizations, and other Observers gathered to write history in the 140th WHO Executive Board Meeting. Among many other agenda points, the candidates for Director General were to be narrowed down to three applicants, with the final elections held at the World Health Assembly (WHA) in May! Aside the usual activities of the WHO EB biannual meeting, the IFMSA delegation had plenty to do, as you might have been following live here on the live webcast.

It all started with business as usual; building excitement and enthusiasm to represent IFMSA to the delegates of the world. Our group met in the freezing cold of Geneva, practiced basic French language (like OMS = WHO), and discussed plans and dreams over fondue.

We developed a number of official statements on different agenda points, of which two have?already been presented, on the topics WHO response in emergencies and human resources for health. IFMSA has joined many affiliated organizations and associations in developing joint statements, e.g. A joint statement on agenda point 8.1 by IFMSA and IPSF about Human resources for health and implementation of the outcome of the United Nations High Level Commission on Health Employment and Economic Growth and a policy brief on Meaningful Youth Participation and Fair Internships together with members of the World Health Students Alliance.

The delegation has been closely following the EB discussions, ranging from access to essential medicines to emergency response to WHO finances and many more. Some key themes have been on issues very close to our hearts, on intersectoral action for health, the social determinants of health and industry engagement. There have been so many interesting discussions that to write them all would be impossible, but two of our favorite quotes so far have been: from Canada Every minister is a health minister; and from the Democratic Republic of the Congo, calling for success of our interventions to be measured by the impact in the field.

The shortlisting of the candidates for Director-General of the WHO has also been interesting. Unfortunately, most of these discussions go on behind closed doors and so our delegation has not been privy to the wheeling and dealing of international politics. However, we did manage to corner one candidate to discuss youth engagement with the WHO!

Another key focus of our delegation has been building relationships with the people here, with the goals of facilitating internships, continuing existing collaborations, securing support for the upcoming Youth PreWHA, preparations of the NCD youth caucus and discovering new avenues for collaboration. We have had meetings with many other organizations, including the World Organization of Family Doctors, the Graduate Institute Geneva, the Alliance for Health Promotion and a variety of WHO departments. Keep a look out for future internship opportunities, speakers and new collaborations that will come out of these relationships!

It has also been interesting to see the similarities between the EB meetings and some of our own General Assemblies (GAs). Within the first half day, the chair of the EB had threatened to switch off the microphones of people who didnt stick to the time-limit, told Member States to cut down their statement length and had a lengthy, one-hour debate about voting procedures. Its nice to see that these issues are not specific to IFMSA!

#JustLikeaGA
Marie, our fabulous VPE delivered a presentation on the IFMSA, our key advocacy projects and youth engagement in general. She was joined by the International Pharmaceutical Students Federation; the Afro-European Medical and Research Network; and the Uganda Youth and Adolescent Health Forum. The resulting discussion was enlightening and inspiring, as we discussed barriers and solutions to meaningful youth participation and youth empowerment. A key outcome of this was the strengthening of the relationships between these groups and initial discussions about collaboration for the World Health Assembly on our advocacy goals.

One of the things we always aim for during WHO meetings is engaging with our national delegations and advocating for more meaningful youth participation at the national level. Tom, our Australian delegate, along with two Australian interns and an Australian from the Junior Doctors Network had a chat with the head of the Australian delegation at the WHO EB. They had many interesting discussions about national affairs and strategy, however, the most concrete outcome was the promise of a new internship spot in the Australian Department of Health – International Strategy Division! One step closer to a youth delegate for Australia.