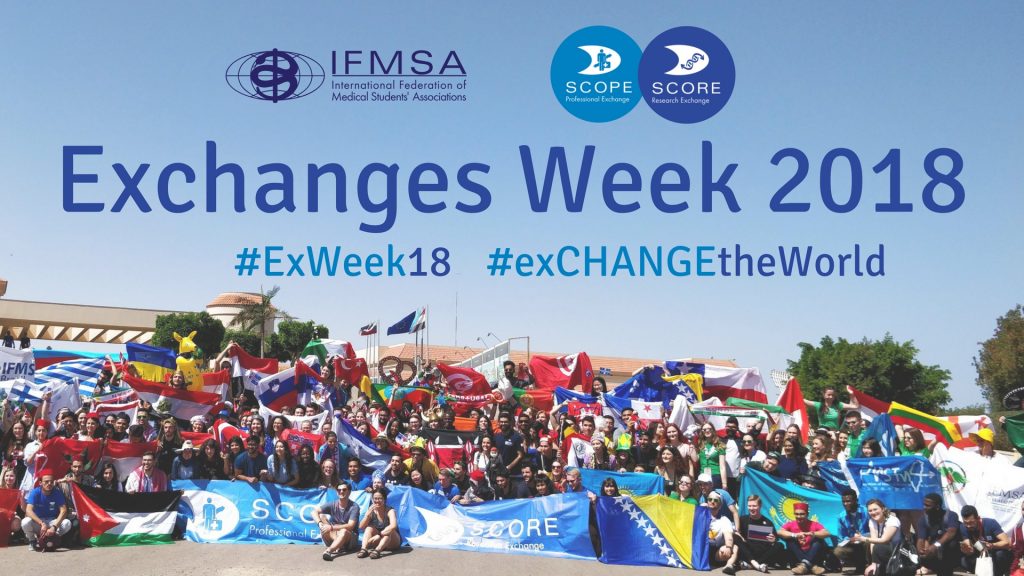 Since the beginning of IFMSA in 1951, it has been one of our goals to connect students worldwide, empower them and improve the world around them from the medical perspective. For that reason, the IFMSA exchanges were established and became the founding pillars of our federation today.

We strongly believe that healthcare professionals in the 21st century’s globalized world need to understand in depth what it means to be healthy and what affects and can affect one’s health in different environments. Intercultural understanding and knowledge about Global Health is essential for students to become culturally sensitive healthcare professionals. To push medicine forward to the next level, it is also important for students to know about the importance of research and how to conduct it. On this specific topic, the Standing Committee of Research Exchanges (SCORE) held a campaign on “the Importance of Research for Medical Students” at the end of March 2018.

The IFMSA exchanges operate with the goal to develop both culturally sensitive students and skilled researchers intended on shaping the world of science in the upcoming future. Divided into two Standing Committees, the Standing Committee on Professional Exchange (SCOPE) and on Research Exchange (SCORE), the exchange officers work every day to grant students worldwide the opportunity to go on an exchange.

However, one of the things that hinder students to go on an exchange with IFMSA, is that they do not know of the existence of our exchange program. To increase our visibility for the exchanges with the end goal of increasing participation and involvement all around the world, the idea of a week-long campaign to celebrate and promote our exchanges worldwide was created in 2017.

From May 14th to May 19th 2018, the second edition of the Exchanges Week took place. For the campaign, a Facebook event was created where all the information would be posted. We focused on different aspects of the exchange program, with a different theme each day: “why go on an exchange” answered by exchange students and tutors, activities to increase the academic quality of our exchanges, implementation of global health in exchanges, social program and promotion of the different regions, showcasing the specialties and strengths of each region. The last day was focused on those working behind the scene, the exchange officers, sharing why they do what they do, to celebrate the hard work done by them to make the exchanges possible.

The Facebook event attracted over 1200 people. More than 90 posts were shared in the event with a total of 1,664 likes and 577 shares. The most shared post was the second post made in the event, giving an introduction to the SCOPE/SCORE exchanges with an infographic, and had 102 shares. Overall, the event reached an audience of almost 14,000 people and the page of the event was viewed by more than 3,300 people.

We look back on a successful event, positive that we have reached our goal of increasing the visibility of the IFMSA exchange programs, as well as convincing and encouraging students to go on an exchange with IFMSA. Not only to challenge themselves to develop on a personal, cultural, and professional levels but also to CHANGE the world with what they learn during an exchange, starting with the local setting around them.