Ethical principles of healthcare in times of armed conflicts & other emergencies 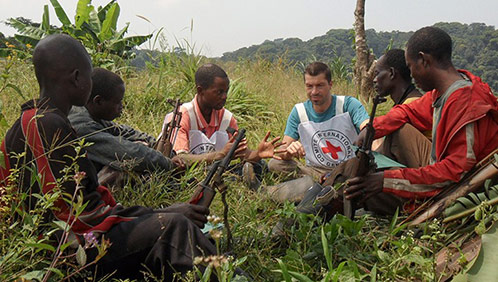 4 200 people were victims of violence against health care between year 2012 to 2014. Health personnel are forced to escape their missions in disaster settings due to personal threats. The respect towards medical ethics and International Humanitarian Law (IHL) are under threat and decreasing for every year. What is the solution and what will be the end to this negative trend?

The World Health Organisation is mandated by the Heads of State in the World Health Assembly Resolution 58.1 [1]?to develop a monitoring tool to track acts of violence towards health care in conflict settings. The International Committee of the Red Cross and Crescent (ICRC) is coordinating the project Health Care in Danger [2], which aims to raise awareness and bring all stockholders around the table. IFMSA, have since 2014, worked with ICRC in raising awareness amongst future medical doctors about this threat towards medical ethics and IHL.

The increased threats towards health professionals and facilities have extensive effects on the access to health care. It is a very complex working situation for the medical personnel, where they need to decide whether they should prioritize the implementation of the medical code of ethics or their very own safety.

What guidelines should medical professionals and others apply in disaster settings? Is the medical code sufficient to guide health care workers in such settings? The ICRC together with other international health organisations created the Ethical principles of health care in times of armed conflict and other emergencies. The aim of which is to provide support to the health care professionals that work in these environments, and are frequently witnessing of ethical violations.

The ethical principles are a source of hope for the future. -?Dr. Maurer, ICRC President

During the launching of the principles Dr. Otmar Kloiber, Secretary General of the World Medical Association (WMA), explained that the same ethical principles are applicable in peace and war. However, considering the violations occurring nowadays to these principles during armed conflicts and other disturbances, the guidelines should remark their importance and contribute to making people oblige by them.

The need of engaging and educating future medical professionals was raised during the event, where at, the importance of developing methods of educating medical students to deal with violent situations, as they are likely to come across them during their professional career, was addressed. Dr. Benton, World Federation of Medical Education, WFME, stressed the importance of training on communication skills, as a way to prevent some disturbances, instead of dealing with them. He also advised on identifying good practices and upraising them, affirming that this sets the example and promotes the debate on these issues.

Do you want to be involved? Do you want to raise awareness about the threat towards medical ethics in conflict settings? Do you want to learn more about this project and enhance your knowledge? IFMSA and members of the federation regularly host events related to the Health Care in Danger Project. During the IFMSA General Assembly August Meeting 2015 a workshop was held in the SCORP sessions; IFMSA-Sweden have hosted a global training and there is a movie to be showcased with following discussions. You can also read more about the Ethical Principles for Health Care in terms of Armed Conflict and other Emergencies here.