EMR15 Oman: An experience of a lifetime 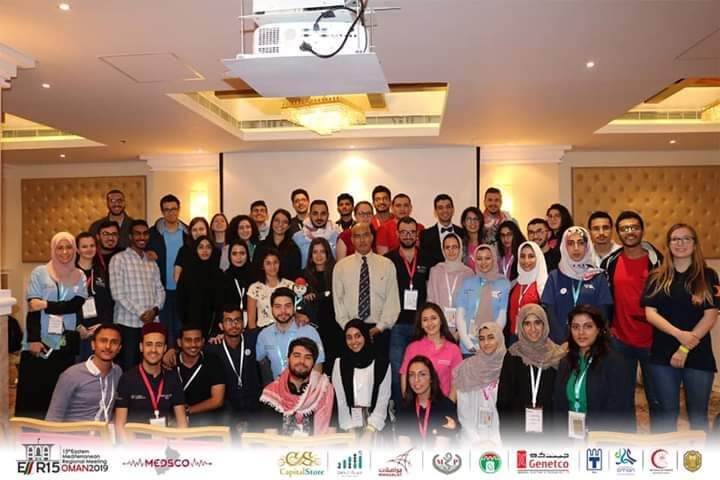 Before arriving at the EMR15 venue in Oman, I didn’t know what to expect … our flight ran late, and the anxiety of traveling was still wearing us out. We weren’t really thinking about what’s to come, as much as just going through the tiring process of traveling: boarding, checking, moving from terminal to terminal….

We didn’t know what to expect, yet what awaited us was the journey of a lifetime, and memories that will last forever. So let’s go through that journey, and for that … we need to go back!

On the 6th of February, and upon our arrival at the Muscat Airport, we were immediately greeted by a kind-faced young man in traditional Omani garb. Soon, we came to learn that the man was a member of the OC (organizing committee) of the event, and that he had been waiting for our arrival. We arrived relatively late, minutes before the start of the meeting’s opening ceremony, and thus assumed that we will have to figure out how to get to the venue alone with no help. So we were pretty pleasantly surprised to find someone awaiting us. The man, called Khalid, quickly exclaimed that if we were to catch the ceremony, we need to hurry. What happened next was a complete hasty blur of going through customs, riding a bus, dropping our luggage at the hotel, and finally being escorted to the opening ceremony venue, which was held in the Rozna restaurant, an old citadel fort repurposed as a modern venue. Immediately, the stark contrast between the ancient walls of the place, the traditional decor and the modern facilities painted a very fitting image of Oman, a place where culture and civilization marry perfectly. It was a very fitting place to welcome the delegations and open the EMR.

The opening ceremony quickly started after a delicious dinner, and quickly set the tone for the evening. Speeches by the EMR OC chairman, the Regional Director of the EMR, and the sponsor of the event intimately served as a warm welcome for all the delegations, and truly reflected the effort and passion behind the organization of such an event. Before the speeches, verses of the Quran were beautifully recited and in between the speeches, stunning musical performances using the violin were played. Among which  we were treated to a rather surprising but delightfully exhilarating rendition of the pop sensation “Havana” on the Violin that really lifted the mood. All in all, from that point, we realized… this will not be your average assembly.

We had our fun, the next morning was all business.. The members were all scurrying like busy energetic bees to reach their Standing Committee sessions, it was such a joy to watch.. Colourful T-Shirts of the committees were everywhere, from the Bright red of the SCORAngels, the brilliant Whites of the SCOMEdians, the calming green of the SCORPions, the delicious orange of the SCOPHeros, and last but not least, the clear blue of the SCOPE and SCORE stars. It was a heartwarming sight to behold and the passion and energy was palpable. The energetic impact of the sessions was especially noticeable during lunch when the hall was abuzz with members discussing everything new they learned over a mouthwatering, albeit spicy, meal.

Soon after, it was time for the big dish of the event, the main course, which is of course, the theme event. This year the theme event dealt with the extremely important and relevant topic of Occupational Health. The theme event had multiple speakers and it tackled both the physical and mental hazards that workers might face within their occupations, with a specific focus on migrant workers. The discussion shed some light on issues that are prioritized in the middle eastern worker system, and the crisis that the region is dealing with on the grounds of providing health equity to everyone. This was the discussion that culminated in the Muscat Youth Declaration on the Health of Migrant Workers, the first declaration of its kind to be adopted by our region!

Fresh from the theme event, we went into the Activities Presentations, a platform for NMOs to share their most prolific projects and present them in front of a committee of judges from the Regional Team and Team of Officials, from which the top three activities would be selected. It was exciting to watch the NMOs present their top projects and compete, and to hear the questions that were asked and the subsequent discussions that were prompted by the judges. All of this brought some needed insight into the inner workings of IFMSA projects.

Quickly after that, the members hurried to join the training sessions, where an impressive variety of trainings was offered. Excited newcomers, and seasoned veterans were excitedly sharing and communicating on which trainings to pick, while newly graduating trainers were nervously preparing their graduation trainings. It was an electric atmosphere.

And after a long first day, he cultural show and the National Food and Drinks Party (NFDP) started. And what a sight to behold that was! Members of countries from all over the EMR came together all dressed in their traditional costumes and dresses. A colourful celebration of the beautiful diversity of the Middle East. That was a bold declaration of the unity of the region. The dances to each country’s traditional music were mesmerising. And the food … that was something else. A mouth watering selection of every country’s delicacy: from Lebanon’s hummus to Jordan’s hearty mansaf to Kurdistan’s sensational sweets to Iraq’s spicy Skanjabin… the selection was limitless and the night was an absolute delight of the beauty of culture and diversity.

The next morning started with the usual buzz: the sessions, the trainings, the connection and the addition of the quirky joint sessions where two standing committees join hands to deliver their sessions. There was something special that day, the second part of the theme event, and one of the most important aspects of the assembly: the Youth Participation Forum. An open space where delegations communicate through a discussion spearheaded by the Regional Director on Meaningful Youth Involvement. The discussion entrailed aspects of the struggles of the NMOs in approaching externals, the role of the IFMSA to support the NMOs, and learning from the success stories of the NMOs. It was an unprecedented step, and a huge leap for the region in the IFMSA, since the discussions and their outcomes will be compiled into a document which will be used to further promote Meaningful Youth Participation.

The second day also contained the EMR plenary, a first of its kind for the assembly. And let me tell you something, if you haven’t seen the delegations of the EMR chant their national cries and songs during the plenary roll call, then you haven’t really experienced the EMR fully. The plenary went very smoothly as the NMOs voted on adapting the amendments to the regio’s Internal Operating Guidelines. The true event of the plenary came when two NMOs competed to host the next EMR. The competition was tough, as each NMO masterfully demonstrated their plan to host. Unfortunately, no host NMO was chosen, but a discussion was opened into the the difficulties faced by some countries to host. The support and respect from the Regional Team and NMOs towards the efforts spent by the candidate NMOs was heartwarming. Everything got significantly better with the social program, a late night rooftop party with thumbing electronic music and a sprawling view of the city of Muscat.

The third day started with an enthusiastic, but a bit sad energy. It was the last day. And by now the members started to feel more like family. But the show must go on, and the sessions did go on and conclude wonderfully. The relief of the session team members was apparent as they successfully completed their mission and delivered their vision. With the day coming to close, the competitive spirit however wasn’t extinguished, and the members yet gallantly presented their projects at their booths in the Activities Fair, a place where projects are presented with elaborately decorated booths and kiosks. The energy was through the roof, and that continued through the subsequent Exchange Fair, a place for all the NMOs to advocate their country’s exchange experience. The atmosphere was colourful and the spirits high.

All that culminated in the closing ceremony, where a heartwarming speech by the EMR chairman closed the event. Here, the awards were announced. Winners of the Activities Presentations, the Activities Fair, the Exchange Fair … and so much more were announced. The competitive sprints again surfaced amidst the roses of the celebrating delegations. Overall, it was a bittersweet time. The EMR was coming to an end, but what we got from it was unforgettable. Everyone after that went to the social program for a tour to explore the nighttime beauty of Muscat, and to say goodbye to the city that embraced us for four magical days.

The next morning goodbyes were in order, as we said our farewells to people who until a few days ago were strangers, but now are family… promises are made over passports and travel bags to meet again and stay in touch … the EMR has officially ended.

A few members stayed behind for an adventurous, exhilarating, action packed, and at times, dangerous post EMR. But that’s another story for another time.

In the end, even if we had expectations for the EMR, they would be shattered ….

We didn’t know what to expect, but what we found was passion, dedication, spirit, joy, learning, connection .., and most importantly … magic.

They were only four days, but they lasted for what felt like a lifetime.

We don’t know yet where the EMR16 will be held, but we’re sure to be anticipating it with flaming hearts, yearning for yet another adventure.

But until that time, what we had here was … truly unforgettable.