COY10 – The Youth Voices Shall be Heard in the Climate Talks 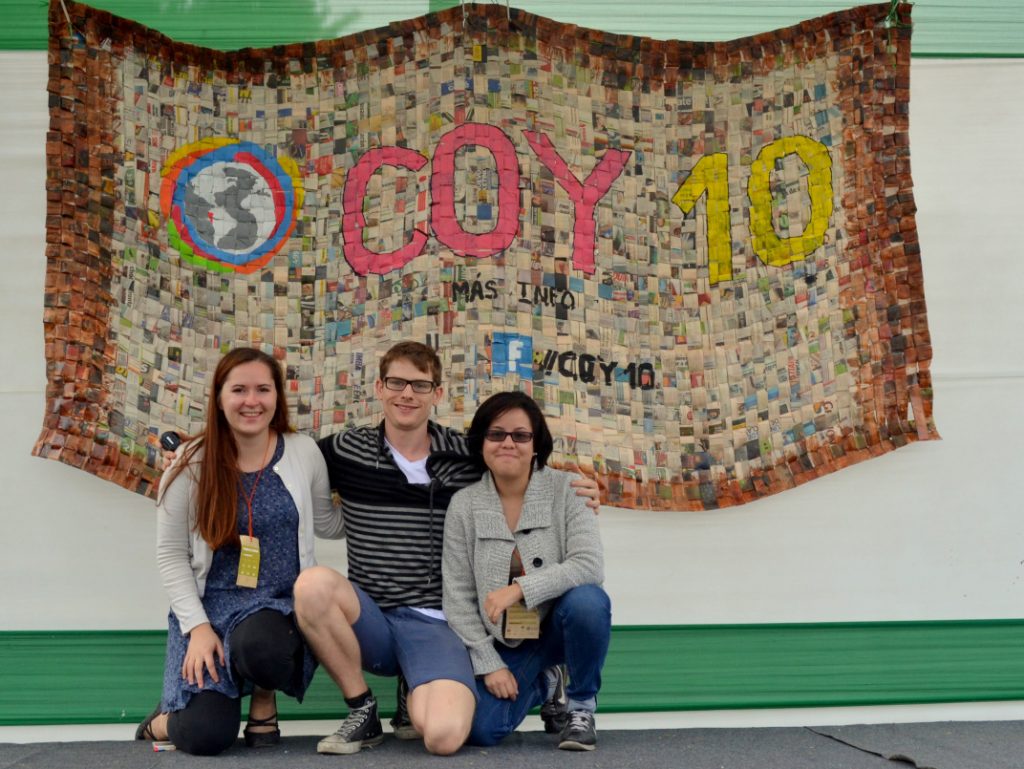 In the past three days, we have been attending the 10th Conference of Youth, also known as COY10. This event offers a place for young people to meet, discuss, exchanges ideas and prepare themselves for the Conference of Parties (COP). The COY10 was opened by an address from Christiana Figueres, who asked to remain impatient in asking our political leaders to shift toward a low-carbon life. H.E. Mr. Manuel Pulgar-Vidal, Minister of the Environment of Peru and President-Designate of COP 20, was also present and told us that we need to maintain our idealism with a lot of realism.

We had the feeling that this year’s edition was a bit different than usual, as it focused more on capacity building of the youth in South America, and less on developing concrete strategies for the COP. It was a bit sad to see a very small representation of the youth from Africa, Asia-Pacific and even Europe; however the distance and the costs associated to traveling can easily explains the limited representation. On the good side, we were able to meet other young delegates from different countries and this will certainly be very useful for us throughout the COP, which starts early tomorrow!

Our delegation has taken the leadership during COY on activating the health working group, and as such, we have been able to submit a 4 pages document presenting concrete suggestions to the draft of Durban Platform for Enhanced Action (ADP). The ADP mandate is to develop a protocol with legal force under the Convention applicable to all Parties, which should be adopted in Paris next year and to be implemented by 2020. The draft of the ADP will be discussed thoroughly in Lima this year, as it is most likely to serve as the negotiation document for Paris.  Our suggestions were for COY-10 to support and call for parties to include health co-benefits when assessing the benefits of climate change mitigation and adaptation. We also provide suggestions to all of the other working groups (human rights, policies, inter-generational equity, education, etc) to ensure that health and well-being weren’t kept in silos, but fully integrated into the multiple social, environmental and economics factors that influence health.

By doing so, we were able to input the final declaration produced by COY10 – the first one in history! This is a strong document voicing out the opinions of the youth of the world, and it will be presented during COP to the UNFCCC secretary. Our two proposed points were accepted unanimously, and can be read as follow:

The final document shall be uploaded soon on the COY10 wesbite, so stay tuned. Furthermore, we have given a workshop on climate change and health, and we have received very good feedback. We have been approached by other delegates, saying there were interested in helping us promoting health during the COP and/or wanted to know more about what we were up to. We have also been able to attend a workshop on the Article 6 of the UNFCCC Convention, which tackles education, training and public awareness. This was particularly important for us, as in the past,IFMSA members have been greatly involved in the development of this article. This has helped us understanding more the relevance and importance of the article, and we will be involved in activities during COP, especially during the Young and Generation Day on December 4th. Not to forget that it was recently confirmed that IFMSA would be facilitating a UN Panel on Article on December 10th in a side-event!

Also, another very good outcome of COP is that we have been able to confirm thatIFMSA will be delivering a speech on behalf of YOUNGO during the opening of the ADP session on December 2 in the morning. The session will most likely be live streamed, so you are invited to watch!

Those past three days have been quite exciting, but the real deal begins tomorrow and we are very much looking forward it! Our snacks are ready, our energy levels are up, and our advocacy tools only want to be shared!

Follow us on twitter using #climatehealth #cop20 for the latest development, and don’t hesitate to drop us an email at [email protected] if you are interested in being more involved with the delegation!

Llama hugs from Lima,
Claudel, on behalf of the delegation