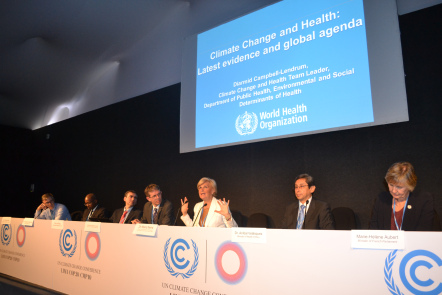 The second segment of COP20 has officially started on Monday! We very much enjoyed our peaceful day of rest of Sunday, as we got to eat absolutely deliciousceviche in the center of Lima and relax by the Ocean under the warm sun. We are attacking the second week with strength and energy!

We have participated in a public solidarity event for the Philippines, who have recently been hit by another devastating typhoon (Hagupit). One must remember that last year, during COP, the same country was being deadly and violently hit bysuper-typhoon Haiyan. The country star negotiator, Yeb Sano, asked the world to “Stop the madness”. This week, we have send our thoughts and strength from Lima to the Philippines, and we have asked for solidarity, not just sympathy. Soon after that I also had a conversation with a woman leader from the Philippines who was telling me how much the impacts on the mental health and well-being of such catastrophes were largely underestimated by the global community. She was working to rehabilitate the survivors through art therapy and dialogue, but she was arguing it was far from being enough. Having the chance to hear such heart-breaking testimonials from people with experience are really enriching, and I can only hope I will never loose that sense of hard realism in the midst of some high-level meetings.

Early morning on Monday, the next draft text of the ADP was released by the co-chairs, and we spend bits of the day reading it through and looking at the modifications made. The famous article 30a we were talking about is now 28a,and yes, health co-benefits are mentioned! However, we didn’t get exactly what we lobbied for in 31d (now 29d), but that is because the whole paragraph was totally reworded. So, the global health community definitely has something to celebrate, but we still to demand more from parties if we want to ensure that the links between climate and health are fully integrated and considered into the new global agreement of 2015.

We sat with the World Health Organization (WHO) delegation in the morning a well, to go through the day and to discuss a bit the road ahead for the week, as Maria Neira, the director of the Department of Public Health, Environment and Social Determinants of Health has just arrived in Lima. We actively participated in their side-event on Monday afternoon titled “Protecting Health, Fighting Climate Change”, and we were extremely proud to present briefly the work of the Federation and the video made by the participants of the Climate Change & Health workshop in Taiwan, China: “Medical Students Take A Stand on Climate Change“. Let me tell you that it has received high praise from the participants and it has triggered the attention of many external partners!

Soon after, we have met up with one country particularly keen to work on the health aspects of climate change, and we got to review the ADP text once more, with some more insight. We came up with a few possible additional suggestions, but most importantly that has lead up to a early meeting on Tuesday with several more countries’ delegates to discuss even more in depth the place of health in the texts, and what could still be done here in Lima, and after on the road to Paris. We sat down afterwards, and read through over 30 pages of the element text (according to Mark – very boring law stuff), but this text is particularly crucial to read and understand, as it will serve as the principal draft for the Paris new agreement. We came up with several suggestions and opportunities for health, which have been proposed to the interested countries. We will closely follow-up on that in the remaining days of COP, and obviously in the upcoming sessions paving the way to Paris in December 2015.

Today was also the opening of the high-level segment – which means that we get to sit in the same room as Ban-Ki Moon and hear him speak -even if he was about a hundred meters away. He recalled the urgency to act, but said he remained hopeful that the world can adopt the right policies today to mitigate and adapt to climate change. We have also heard from Evo Morales, the president of Bolivia, who gave an (extremely) long speech asking for a total shift of paradigm and blame capitalism for many of the wrongs of the world. The presidents of Nauru and Tuvalu, two small islands of the Pacific that are already facing the direct consequences of climate change. I am still amazed when I get out of those plenary sessions that I get to hear in live some of the people have read or heard about on the news and in papers for several years now…

The rest of the days are filled with helping YOUNGO drafting the statements for the plenary – which is not the easiest task this week as each statement must represent the views and priorities of at least two other UNFCCC constituencies. That is because the UNFCCC has decided that in those segments of the COP, civil society (composed here of 9 constituencies) would only get three time-speaking in total per sessions. Therefore, we have create subgroups with other constituencies, such as the environmental NGOs and the women and gender group, to be fully representative and to make sure that the voices of the youth were still heard. One must understand that as we are heading toward the end of the conferences, priorities are giving to parties to actually agree on something (hopefully meaningful) so that Lima actually deliver and gives the legacy the president is hoping for – one of action.

One of the thing I am most proud of at this year’s COP is how we have been able to reach out and to make ourselves visible, even though we were a very small delegation of only four people. We therefore invite you to read and share those two publications:

Both have a important reach-out capacity and this is what we were looking for. We have to ensure the health sector doesn’t work in silos, but works toward being fully integrated into other “fields” discussions, such as economy, governance, strategies for adaptation and mitigation. The links between climate change and health, and more broadly health itself, deserve more attention from delegates, because the stakes are extremely high.

There are only three more days at COP- the time is passing by so far, and I still have the impression that there is still so much more to do! We have yes quite a lot to celebrate and to be proud of, but it is extremely hard to gauge how much of an influence we have been able to have. Probably we will never know.. As Mark nicely said today, we sometime feel like we understand what is going on, and then, we just don’t. But we are committed to keep working until Paris and beyond, and this is what that spirit that we will work during those three last crucial days.

We still have one side-event tomorrow with the UN Alliance for Education on  Climate Change Education, Training and Public Awareness – that I will have the chance to facilitate (and we are expecting some very important people!); and a mini-side event of Thursday about green opportunities for young people careers, and in which I want to bring the topic of greener healthcare systems. Oh, and also, we have heard the exciting news that Leonardo Di Caprio might be coming to COP tomorrow, as the UN Messenger of Peace with a special focus on climate change. Let’s hope that is not only a rumor…

That will be it for today – Hope you are enjoying those entries!

Claudel, on behalf of the Delegation

Bonus of the Day
Overhead @ COP: all of this is simply the most amazing thing that has appeared on social media in the past two weeks.