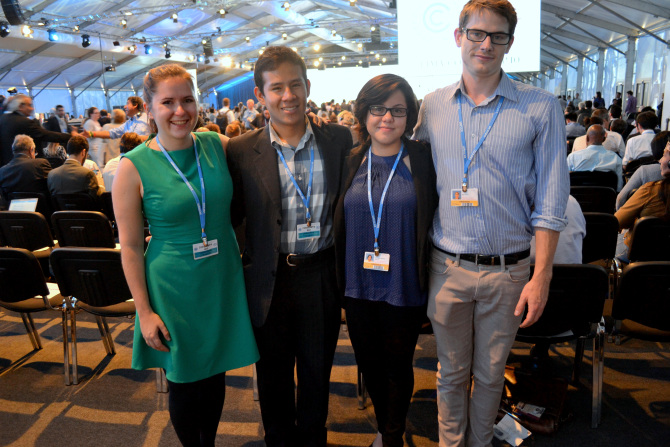 We are already at day 5 here at COP, and again so much is happening. Every minute of the day is filled with meeting new delegates; with discussing the inclusion of health in the ADP text; with hearing a debate between countries regarding potential agreements; with attending side-events; with collaborating with YOUNGO to make sure the voices of the youth are well heard. I have decided to escape the craziness for few minutes, and to write about Day 3 and 4 at COP, which has been even more busy than Day 1 & 2- if that is actually possible!

There has been very interesting development regarding the importance of education and public awareness (referred as Article 6). On December 3rd, during the plenary of the COP, the delegates of Poland, followed by Mexico, the European Union and Dominica Republic, have highlighted the willingness to make sure the concepts of the Article 6 of the convention would be included in the new text that is to be adopted in Paris. One delegate built up on this and expressed the relevance of the Article 6 when he said: “If we continue to support and educate the youth, they won’t make the same mistakes we did“. Poland have written a draft of a ministerial declaration and they are hoping other countries will support. Together with other youth delegates, we have taken a step further and have started reviewing the draft of the declaration to propose a few changes. We have also written a letter to thank the Polish delegation for their efforts to make sure education and public awareness were seen as key components of climate discussion so that we train new generations of climate-resilient citizens. We are also in contact with Dominican Republic, as in the previous years, they have shown much much support to Article 6, and have actually brought many of IFMSA’s suggestions and ideas to the negotiations table. So, this is very exciting and all will be submitted in the upcoming days.

One of the other exciting projects we are on is core lobbying activity. We have written a one-page policy brief, available in three languages (English, French, Spanish) and we are distributing it to delegates and members of the negotiations team. We have so far talked with people from more than 30 countries, and we keep increasing our numbers each day! The World Health Organization (WHO) has been really kind enough to let us use their booth, and this is very useful for us. When we start the discussion with COP20 delegates, either they agree with us from the start that health is a priority, and hence should be more integrated to the negotiations; or they have a basic understanding of the health impacts of climate change. We always spend a few minutes painting a portrait of the situation, clarifying the links. Usually at the end of our conversation, they leave with our policy brief, and show interest in bringing our proposal up to their negotiating team. The most receptive delegates were the ones from Africa, the MENA region and Latin America. We will continue to track the negotiators down, especially the ones we haven’t talked to yet, and we will ensure proper follow-up with the most interested ones. So what are we exactly asking for? Three things, all related to the ADP draft of November 2014:

If you want to help us, you can tweet:

With consideration of #health commitments will finally be seen as opportunities: add #health cobenefits to #Art30a & #Art31b of #COP20 #ADP

On December 4th, it was the Young and Future Generation Day. Many activities and side-events were organized to make the youth more visible in the process. As being part of YOUNGO, we have got a change to meet and talk directly with Christiana Figueres, the executive secretary of the UNFCCC, and Manual Pulgar Vidal, COP20 President and Peru Minister of Environment. I was able to raise a question regarding health, but to be honest, I was disappointed by the poor answer. Last August during the WHO Climate and Health Conference, Ms Figueres asked the WHO to recognize climate change as a global public health emergency. One must know that it takes a lot for the WHO to classified something as a global public health emergency. She was deeply convinced at that time, however I have not felt that her conviction was integrated to the UNFCCC discussions. I also wholeheartedly disagree with the thinking that health discussions should stayed only in the WHO offices, which is something Mr Pulgar Vidal seemed to suggest with his brief answer. Ms Figueres on her side directly said: ” We don’t need to load to boat so much that it sinks”, referencing to health being more integrated to the discussion. Well, it goes without saying that I dislike this. We ended up directly giving both Ms Figueres and Mr Pulgar Vidal our policy brief, and we can only hope that they will give it a quick read.

We were also interviewed by the Climate Change studios, and in a few minutes, we were giving the challenge to describe what our organization was doing for climate change. We focused on capacity building through workshops, international campaigns (such as climate = health), fruitful partnerships with other groups (WHO, Global Climate & Health Alliance) and high-level advocacy, like what we were doing at COPs.

An other important win of our delegation was a private meeting with Peru Health Minister, to which Joel and Majo went. They discussed the roles of students, they presented our policy brief, and also got to attend a session at the parliament on Peru upcoming national health reform. They were happily surprised that climate change was part of the discussion, and that there were development for better monitoring of the health impacts of climate change.

We have also attended many side-events, and sometimes were lucky enough to ask questions to the audience and panel of experts. Most of our questions turned around the place of health and civil society in the COPs. Going to side events is like playing the lottery: you never know if it will be a win or will end up being very disappointing and not meeting your expectations. I especially liked one on the importance of Article 6, and on the role children and youth could play. One panelist said that we should be careful about fake activism: sending a tweet shouldn’t be seen considered as activism. We should go to the field, talk with communities, especially in remote areas, to hear what they have to say.

We also keep hearing good feedback about our intervention on Tuesday. People remember that “a doctor” talked. Mark was wearing his stethoscope yesterday and was asked if he had been the one speaking on the ADP opening session. The realization that people remembered only the very general “I am a doctor” part of the speech and not that it was a girl with very long hair actually giving the speech made us laugh. At least our message passed!

There is one more thing I would like to bring to the discussion. Last year, one negotiator amazed the world: Yeb Sano. He was in the team of Philippines, and brought the world to tears with his powerful interventions. We must also remember that he was speaking in difficult times, as super-Typhoon Haiyan has just hit his country. Climate change is a reality of their daily life, as we know that one of climate change consequence is an increase of both the frequency and intensity of extreme weather events, such as tropical storm. Well, there was a rumor that he would be coming next week, after mysteriously having not been able to come for the 1st week. #YebinLima started trending on Twitter, but changed recently for #YebNotInLima. Yeb Sano has decided to stay in his country, as the Philippines are once again, less than 12 months since Haiyan, expecting the hit of another super-typhoon, Hagupit. 1,080 cities and towns are to be affected by Typhoon Hagupit. Our thoughts are with them. We also invite you to follow his very engaging twitter account and to show your support. Lima must deliver.

So what is up for the next days?

The COPs are very loooong conferences: twelve days of pure negotiations! But one must understand that almost 200 countries are conveying in one place to discuss potentially binding agreement for the climate, agreements that will largely impact their national policies, development and economies. Generally, my feeling is that there is some of optimism here in Lima, and that people are actually seeing and believing that Paris will bring that parts of the solutions, and that Lima will serve as a launch for that to happen. However, negotiations go a bit slower than expected, so the next days will be crucial. COP20 President, Mr Pulgar Vidal said yesterday in an interview that he hopes the legacy of COP20 will be one of good atmosphere, of solutions, of more actions, more ambitions; and that the outcomes will depend on the ability of the different sectors to come and work together. Let’s just work to make sure that this will be the reality.

We hope you are enjoying those entries, and that it gives you a better ideas on what’s going on at COP. If you have any questions, or if you would like us to discuss something more into details, please comment on this entry or send us an email directly at [email protected]

Claudel, on behalf of COP20 Delegation.

Bonus
Overhead @ COP: ” I’m willing to believe in unicorns, but carbon capture and storage (CCS) at scale is a step too far…“