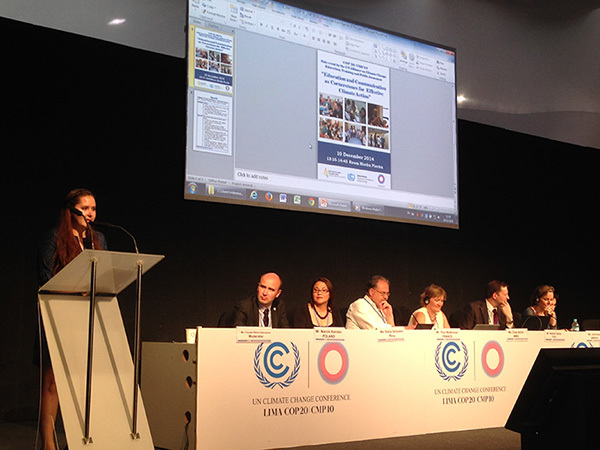 So here we go, COP20 is supposed to be over by now, but some sessions are still running, as negotiators are in what seems to be a deadlock. I am writing from Miami airport, on my way back home after more than two incredible – very intense – weeks in Lima. I never thought so much could be achieved, yet so little. I believe we have experienced all the possible range emotions, from extreme happiness and motivation, to feeling completely exhausted and hopeless. But I will keep those general thoughts for a next entry. As of now, it is important to report on what was done during the last three official days of COP20 by the IFMSA delegation!

To clear all of your questions: no, Leonardo Di Caprio, didn’t show up at the COP20, to the disappointment of many, but his side-kick, Al Gore, did come for three days, and we got to attend a private observers briefing with him on the Thursday. Al Gore was the vice-president of the United States under Bill Clinton, has produced the movie “An Inconvenient Truth” and now is leading the Climate Reality Project, aiming to train individuals around the world to put pressure on the governments to shift toward low-carbon systems and renewable energies. Al Gore is genuinely optimistic, and do believe we will succeed because there is a much higher level of awareness today. He however senses the emergency to act today as the window of opportunities for mitigation and adaptation is closing quickly.

On December 10th, I facilitated a side-event organized by the UN Alliance for climate change education, training and public awareness, “Education and Communication as Cornerstones for Effective Climate Action”. The side-event itself was quite a success I believe, and even for me as a moderator, I was impressed to see that change was indeed happening around the world. We had opening remarks by the COP19 President and Secretary of State of Poland, Marcin Korolec; by Miss Sonia Gonzalez, Director-General for Environmental Research and Information at Peru’s Ministry of Environment; and by Paul Watkinson, head of the French delegation at COP20 and member of the COP21 Presidential Team. Quite high-level and impressive people. Their opening speeches were followed by five presentations from different UN Agencies (FAO, UNESCO, WMO) – all of them showing the importance of the Article 6 of the UNFCCC Convention. As I said during my opening words, I would have never imagined when I started medical school three years ago, that I would attend COP on representing medical students of 116 countries, let alone facilitating a discussion next to very distinguished speakers and professionals.

I have to blame IFMSA for this, and the importance the Federation has given to non formal and informal education. For more than 60 years now, IFMSA has used peer-education methods to educate and train medical students in fields and subjects that are not being touched upon in the medical curricula, climate change and health being one of them. Students are giving back to their peers what they have learnt and above all, they share their motivation, ambitions, ideas so that other students can grow as leaders and become agents of change. So it is not surprising that IFMSA, with numerous other organizations representing youth, has been a strong supporter of Article 6 since its beginnings.

This year again, we have worked to make sure the concepts outlined in Article 6 would be integrated into the Paris agreement in 2015. With other youth delegates, we have analyzed a ministerial declaration proposed by Poland, and have suggested some changes to include notably the recognition of the different models of education (formal, non formal and informal). We have also asked for a greater recognition of the role of youth, and of the opportunities and co-benefits of climate change actions. And yes – we were successful!!! You can find the final version of the declaration here.

On December 11th, we have met with Mary Robinson, an amazing and inspirational woman. She is the UN Special Envoy for Climate Change, but also a human rights champion and the first female President of Ireland. We got to ask her about the place of the right to health within the UNFCCC talks, and she agreed that it was not getting the place it deserves. She said health was a good way to bring at home the several impacts of climate change, such as the right to food and the right to water. She deplored the weak language used in the current texts in regards to human rights, and said it was much stronger back in Cancun in 2010. I appreciated how she seriously took my questions regarding the right to health and how easy it was to engage in a conversation with her.

I have also got the chance to sit with other members of YOUNGO to draft the statement to be read during the High-level segment. Jonathan, from Belgium, was chosen to speak on our behalf, but all were invited to contribute in the writing. And boy, we did good. You can watch the intervention on Youtube. I especially find the ending quite powerful:

We are running out of ink and this is the last chapter. But the story does not have to end here. We urge you to grab your pens and start writing us a positive future.

On Friday morning, I was invited to participate in a mini-side event on green jobs organized by the Belgium Youth Representatives and a French students network on sustainable development. I talked about the role medical professionals should play in making sure the healthcare systems were not causing any harm to the environment, and linked that to the work of one very interesting NGO, Health Care Without Harm (HCWH). I mentioned the importance for the hospitals to lower their enegy consumption – in some countries, like the UK, the health systems account for up to 25% of the public sector energy consumption. This is enormous! I also believe that we should always try to lead by example, and walk the talk. I discussed with a political adviser of a Regional Minister of Belgium, and she also showed a lot of interest in IFMSA works and priorities at COP20.

Our delegation has also loads of fun on Friday morning as we walked around the venue wearing scrubs. Normally, to do such an “action”, one shall fill a request to the UNFCCC secretariat, and that has to be approved before the action is conducted. However, things didn’t exactly go as planed, and we had to change plans. We were asking ourselves the very philosophical question: what makes an action, an action? Well we got our answer after we walked for about 20 minutes around the COP venue with our very blue scrubs on with some “climate = health” message written on them. But a very good thing came out of this: not only did we not get debadged for conducting an unplanned action, but we did manage to get a quick chat (and a picture) with COP20 President, Manual Pulgar-Vidal, who remembered us!

But – let’s get to the real thing: Where is the action in Lima?
Many are angry about the slow pace of negotiations. The COP is already running over time, and parties are still not happy about the outcomes document, especially in regards to finances and the ADP. Everybody seems to agree there is a need to act now, and before Paris. The will is there, but all countries have their own vision, their own priorities (for some, it is loss and damage, for others it is the differentiated capabilities), and everything goes very slow. We have to thank Mexico for some powerful interventions on youth and gender; and Brazil for its strong stance on health. As we left COP on Friday night, the discussions were still going on, with some now and then remarks by the COP20 President calling for consensus and an acceleration of the process so that Lima could conclude on a positive note, a powerful call to action and a strong sense of commitments by countries.

The ADP Draft document was reduced by the co-chairs from 50 pages and hundreds of options for Parties to choose from – to less than 7 pages on Friday night, to 4 pages on Saturday early morning. Good news: Health co-benefits are still in the text (see paragraph 18), which means that IFMSA can definitely celebrate its success on this. Of course, the fight is not over and we will have to make sure health and health co-benefits make their way into the Paris agreement, but we have a year to make that happen. We are still extremely proud to have manage to include a brand new concept (health) to the draft text that was originally not referenced to at all!

As I am ending this (long) entry, I have just received the news that the negotiations were most likely on for a 2nd extra night. Let’s just hope they will be able to conclude, and that Lima will have served its purpose.

So all in all, it has been three last busy days at COP20. We will come back with another entry with more personal reflections on our experience in Lima, from our hopes to our delusions, to our perspectives on the road that is yet to be built. On this note, this is where our COP20 adventure ends. It has been quite a ride, and we hope you have enjoyed reading our updates every 2-3 days.

Claudel, on behalf of the Delegation

Bonus
Overhead @ COP: “I was supposed to fly to Cusco at 6am this morning. Instead I found myself inside Cusco plenary room.” – Malaysian negotiator on Saturday afternoon, as the negotiations were still going on.