Call for members for the UN Task Force 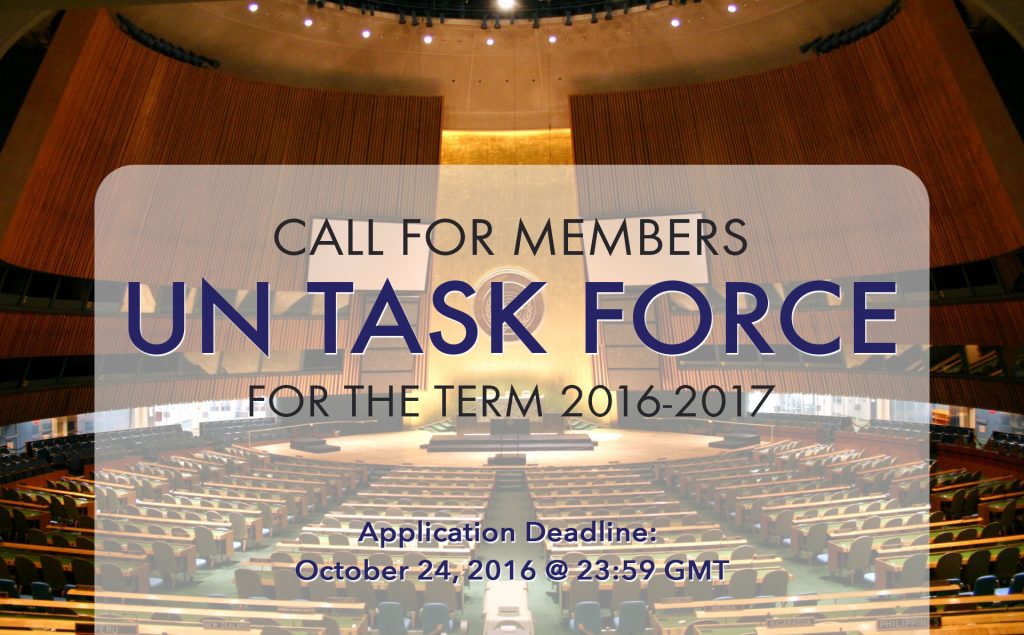 We hereby open the call for applications to the extended mandate of the United Nations Task Force.

The Terms of Reference of the United Nations Task Force were originally adopted at August Meeting 2015 and you can find them (here) for a better overview of the work and original timeline of the Task Force. Based on the recommendation of the Task Force and Executive Board 2015-16, the TF was not closed during AM16 and a call for new members is hereby sent. All current members need to reapply in case they would like to stay in the TF. The new Task Force has the opportunity to create a detailed work plan for the upcoming term in collaboration with VPE and EB to ensure smooth continuation and implementation of its mandate.

Also, please refer to this Handbook for more information on IFMSA Task Forces and their work.

Description
The IFMSA have during the last decenniums gained an increased role in shaping global health through policy design, implementation, review and monitoring. Our members have expressed enhanced interest to contribute to this responsibility of the Federation. The Team of Officials’ (TO) Liaisons Officers (LOs) have limited resources to fulfill this mandate and this TF thereby aims to ensure best possible outcome of our involvement in the UN.

Composition
The Task Force will be composed of 5 members with the following tasks:

The work and activities related to the UN agency WHO are outside and not included in the UN TF work and responsibilities.

Timeline for the 2016/2017 term
The timeline below is annual and can be reviewed and updated without IFMSA GA approval by the IFMSA VPE and LOs. Changes may appear.

If you are interested in joining any of the above mentioned task forces, please submit to [email protected]?the following documents using this code in the subject [TF UN] , no later than October 24, 2016, 23:59 GMT:

We look forward to receiving your applications!