A Call to Free Europes Youth from Health-Harmful Marketing 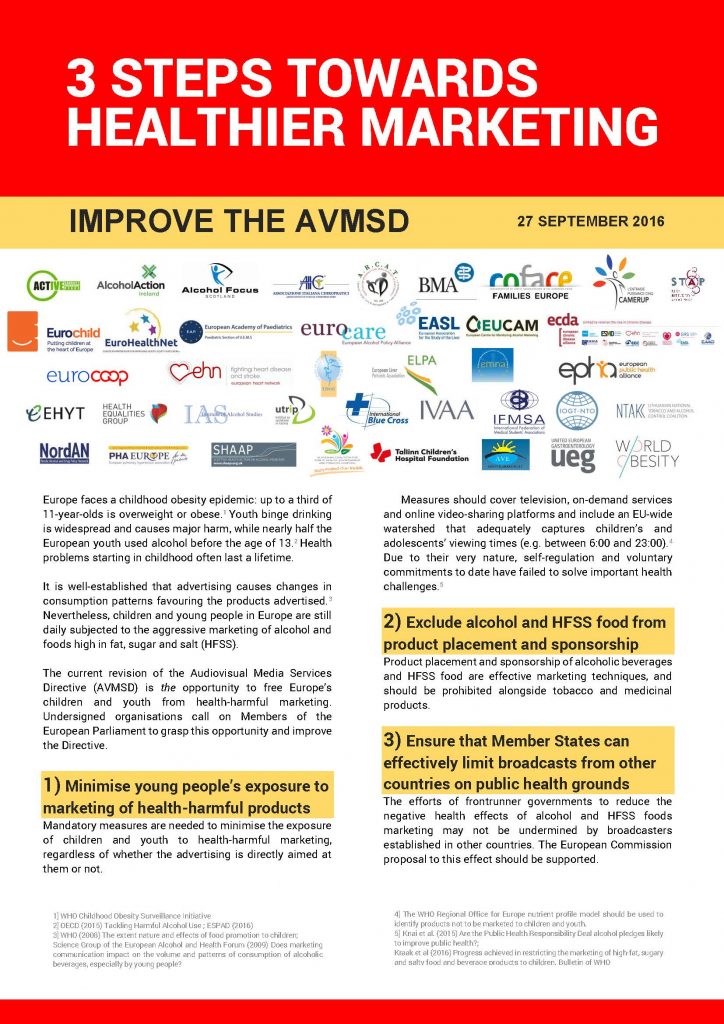 Europe is facing a childhood obesity epidemic and youth drinking is causing major harm. Health problems starting in childhood often last a lifetime. The links between advertising and increased consumption are well-established, but European children and youth are still constantly bombarded by manipulative marketing and promotion across all media.

Jana Hainsworth, Secretary General, Eurochild: “Children are less likely to differentiate between programming and advertisement. So, self-regulation or encryption is not enough to protect children’s right to health and all other rights enshrined in the UN Convention on Children’s Rights. Revision of the EU directive on audio-visual media services must consider best interests of the child and children’s own experiences to enable them to safely access information, use digital technology and be active citizens.”

The declaration demands that strong, effective measures are put in place to minimise young people’s exposure to health-harmful marketing; to prohibit product placement and sponsorship by alcohol producers and foods high in fat, sugar and salt; and to ensure that Member States can effectively limit broadcasts from other countries on public health grounds.

Mariann Skar, Secretary General, European Alcohol Policy Alliance: “Exposure to alcohol advertising increases the likelihood that young people will start drinking at an earlier age, and to drink more if they already consume alcohol. We are not proposing a ban but moderate changes that would allow children to grow up free from alcohol marketing”

The statement follows the European Parliament hearing on the revision of the Audiovisual Media Services Directive (AVMSD), which is the opportunity to address the marketing of unhealthy food and alcohol at European scale.

Nina Renshaw, Secretary General, European Public Health Alliance: “This is not about telling people what to eat, nor telling parents what to feed their children, but rather freeing our kids from the pressures of marketing and promotion. Today the unhealthiest options are constantly put right in front of kids via the programmes they’re most likely to be watching ? not just cartoons but football matches, singing contests and reality shows. Any parent knows too well the persuasive power of kids exposed to these ads, and how difficult it makes it to go for healthier choices.”

Susanne Lgstrup, Director European Heart Network: “Since the beginning of this millennium, it is well established that marketing to children affects their eating behaviour. Whilst marketing of foods high in salt, fat and sugar is not the only influencer, it is an important one and this is why the World Health Organization is calling on governments to adopt strong measures to reduce the impact on children and adults of all forms of marketing. We believe that the European Parliament now has the perfect opportunity to act on that call.”

Statement by European Academy of Paediatrics: “Health promotion initiatives should focus not only on limiting exposure to messages inciting substance abuse and unhealthy diets but also on problematic cell phone use which is closely related to this risky behaviors. Intervention strategies in early adolescence should also cover schools in order to assist families in reducing or eliminating the development of dangerous attitudes.”