The International Federation of Medical Students’ Associations (IFMSA) was present in the 150th Session of the World Health Organization Executive Board (WHO EB), from the 24th to the 29th of January in Geneva in a hybrid setting.

The WHO EB is composed of 34 members, whose function is to implement the decisions and policies of the Health Assembly. This meeting is held twice annually, and during January, it serves to agree on the agenda for the World Health Assembly and the resolutions to be considered by it. One important matter to consider is that this meeting, to foster multilateralism,  is attended by non-EB member states, WHO technical officers, intergovernmental organizations and civil society.

The IFMSA delegation was composed of 11 people:

Even though the IFMSA Delegation attended the meeting virtually, the Delegation had several direct interactions with stakeholders present in the meeting, including the Member States and WHO Director-General itself, Dr Tedros, who mentioned that “We (WHO) believe you have a lot to contribute. VIVA IFMSA, and thank you so much!” All these actions were possible due to the innovative advocacy efforts developed by the 11 members of the IFMSA Delegation, ranging from Advocacy Social Media Strategy (including IFMSA Twitter Space) to delivering IFMSA Official Statements.

Furthermore, the Delegation always strived to join efforts with other youth present in the meeting, including youth delegates and representatives from the International Pharmaceutical Students’ Federation (IPSF) and the Junior Doctors Network of the World Medical Association (WMA-JDN).

The Agenda of the 150th Session covered many topics, but the COVID-19 vaccination coverage discussion was top notch. Other key issues discussed in the Session included harmful usage of alcohol, obesity, oral health & elimination of cervical cancer, and Noncommunicable Diseases (such as Mental Health).

Another important highlight of the Session was Dr Tedros nomination as WHO Director-General for a second consecutive term.

The 150th Session of the WHO EB was recorded, and all Sessions can be accessed online at Session recordings.

As we get closer to the next World Health Assembly, IFMSA will continue advocating towards meaningful youth engagement within WHO, aiming for the establishment of the WHO Youth Council and urging WHO to develop new and innovative ways for engagement in the virtual setting.

For further information, don’t hesitate to get in touch with the IFMSA Liaison Officer to the World Health Organization, Iris Martine Blom, at [email protected] 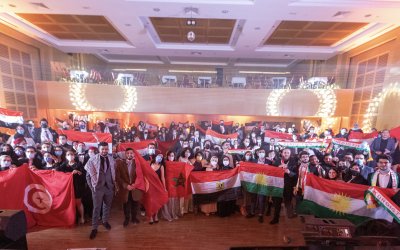 20 Years of youth empowerment and action within the eastern Mediterranean.

Give us a call or fill in the form below and we will contact you. We endeavor to answer all inquiries within 24 hours on business days.
(222) 400-630
contact[email protected]