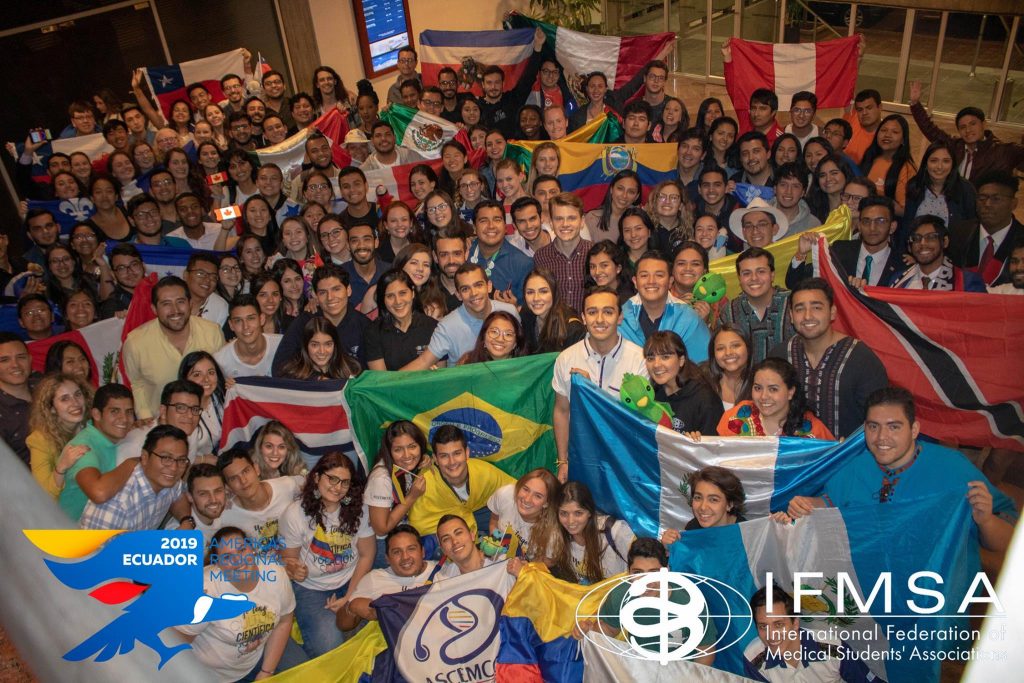 Let’s unite in a solidary and prodigious America – Marcela Barrientos

The Americas Regional Meeting 2019 was held in Quito, Ecuador and gathered over 200 medical students from Canada to Chile. In total we had 16 NMOs from the Americas and 1 NMO from other Region making this event more diverse as ever. The AmRM OC worked tirelessly to provide the Region, the Regional Team and the Team of Officials. the best of Ecuador and a great stay.

This great adventure started on January 2nd, with the arrival day of Pre AmRM which was held until January 5th in Manta, Ecuador. The workshops that were conducted were the following:

These workshops were conducted by the Officials attending, members of the Regional Team and experienced trainers who delivered sessions aimed to build capacity and empower members in the different topics addressed in the workshops such as external representation, attacks on healthcare, IFMSA’s internal and external goals, sexual and reproductive health and rights, among others.

From January 6th to January 10th the Americas Regional Meeting was held in Quito, Ecuador. The theme event was Climate Change and Health which presented how much the impact of climate change has on people’s health and way of living. We had two sessions on this; the first one was a roundtable which had experts from Universidad del Ecuador that presented the different ways climate change affects population and, after the presentation, we had a roundtable to answer questions for the public. The second session was about Climate Change and their Relationship to SDGs which was conducted by AMSA’s President and Officials attending AmRM which was aimed to bring the participants’ perspective how to join these topics to work on them together. Finally, the Regional Team agreed to having a session related to Climate Change and their Standing Committee which were various joint sessions so that participants could get a broader perspective

We had 7 morning sessions which were President’s Sessions and Standing Committee Sessions which were thoroughly and passionately created by the Regional Team, Session Teams and Officials based on the Regional and the Standing Committees’ Priorities. They were also elaborated in accordance to the IFMSA Priorities and aligned with our Strategy. During the afternoon we had training sessions, external representation sessions, activities fair and activities presentation and Joint Sessions.

During the afternoons, we also held the Plenaries which were conducted by Hiba Ghandour, our LRP. The Plenaries in AmRM are the highest decision – making space for the Region and the documents adopted were the Reports from the Regional Team, the Americas Strategy Report, The Americas Regional Priorities crafted by IFMSA President and participants from the IFMSA Global Priorities Workshop, the IOG amendments and the next host for AmRM20. IFMSA – Brazil was chosen to be the NMO in charge of this amazing event for next year.

The AmRM brought the Americas together and took that passion, energy and motivation so characteristic of the Region into ideas of cooperation, solidarity and hard work. The mixture of cultures, languages and history made this RM unique to strive for positive changes in the Region and in the participants.