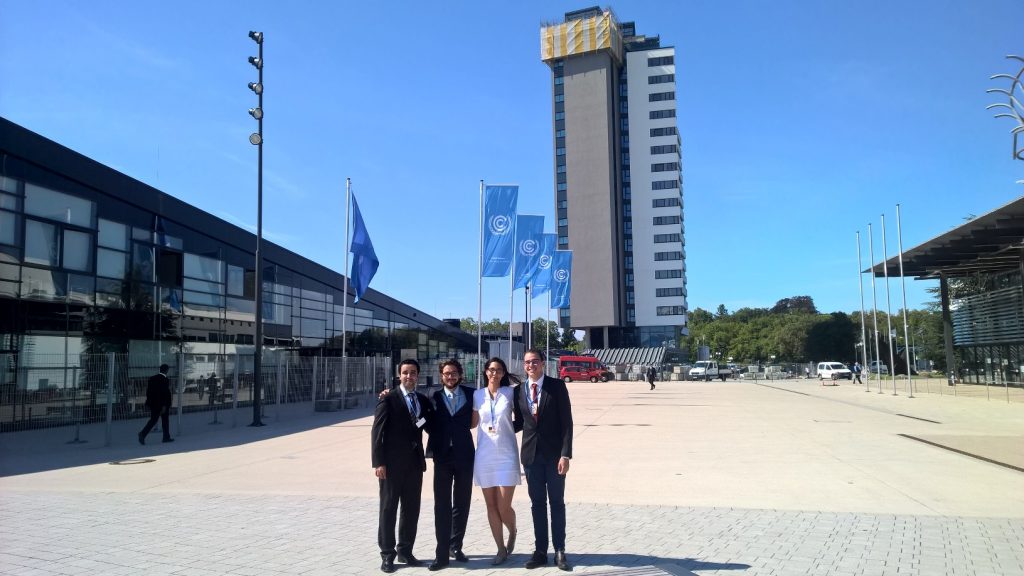 IFMSA Delegation to ADP 2.10, Skander, Amr, Sam and Yassen, is set and excited to bring love for health and student commitment into the conference scenario.

Skander Essafi, fifth year medical student from Tunisia, is the current SCOPH-Director and the Liaison Officer for Public Health Issues (LPH) elect for 2015-2016. He started advocating on public health locally, nationally and is currently getting more involved interationally to build capacity within medical students but also raise their their voice at the external level. He represented IFMSA at the WHO EMRO Regional Committee in 2013 and the WMA/WVA Global One Health Conference 2015. He will take over the leadership position of IFMSA within the Climate change Discussions in the next term and is expecting to gain as much knowledge into the setting of the meetings and the main challenges for the upcoming months, namely the next ADP and COP21, the collaboration with WHO, certain member states as well as within YOUNGO.

Samantha De Leon is a fifth year medical student from Panama currently interning at PAHO Emergency Preparedness and Disaster Relief, serving as IFMSA-Panama national officer for public health and trained in the ISGlobal Summer School of Climate Change and Health. Sam expects to also meet the panamanian delegation and strenghten IFMSA-Panama advocacy through their ackowledgment.

Amro Diaa, fifth year medical student from Egypt, is finishing his term as national officer for professional exchanges and SCOPE Information and technology support division co-ordinator. He recently attended ISGlobal summer school on Global health diplomacy. He also attended the preGA on climate change and health in August Meeting 2015. Amr expects to understand more about the politics of climate change negotiations and to meet WHO representatives and see how they advocate for including health in the climate change negotiations.

And as head of delegation, Yassen Tcholakov, a first year Public Health Resident at the McGill University who recently completed his MD at the University of Montreal has been very active in climate change, has done a WHO internship on climate change and health a few years ago and this year, he has participated in all ADP sessions so far.

So, what is the ADP?

The Ad Hoc Working Group on the Durban Platform for Enhanced Action (ADP) is the platform that will serve as the basis of the climate-document that will be (hopefully) agreed upon in Paris at COP21 to oblige all parties to contribute to climate change mitigation and adaptation efforts. The ADP will define how we in the 21st century fight, survive and tackle climate change.

This August Session is very important because the parties and the observers get to input the draft text and to put forward concrete suggestions. In COP20 in Lima, IFMSA worked hard to make sure the concept of health co-benefits were integrated to the ADP text and our advocacy strategy was extremely successful. This work continued brilliantly during the ADP 2.8 and 2.9 Sessions this past February/June, and now health has the potential to be referred to in the preambule of the text, but only if we keep on advocating for it.

Group goal and vision of this ADP 2.11

The IFMSA delegation will during this third meeting of the ADP of the year, strive to build upon the work of previous delegations in order to maintain the profile of health in the new climate agreement being negociated at this UNFCCC session while also advocating, with a health narrative, for the importance of a strong climate agreement that will limit the impacts of climate change on human health. Namely, basing ourselves on the IFMSA policy statement on Climate Change and Health, call for a 1.5 degree maximal mean temperature increase and for the peak of CO2 emissions to be reached by 2015. Furthermore, IFMSA believes that international trade agreements should promote environmental protection and seek to curb climate change (IFMSA policy statement on Trade and Health) and IFMSA will advocate to ensure that parties positions are not built upon the economic interests of a few multinational companies but that they reflect the needs of the people of the world. Finally, following on long time work of the Federation, the delegation will follow the discusssions on Action for Climate Empowerment (formerly article 6 – dealing with education and empowerment on climate change).

Given that the exepctations of this meeting are high and that the objectives of each ADP session have been changing throughout the year, we will strive to secure the position of health in the ADP text, to communicate the educational and training aspects especially for the youth in the field of climate change, and to connect with?the different and relevant stakeholders.

Some things to be on the lookout for: