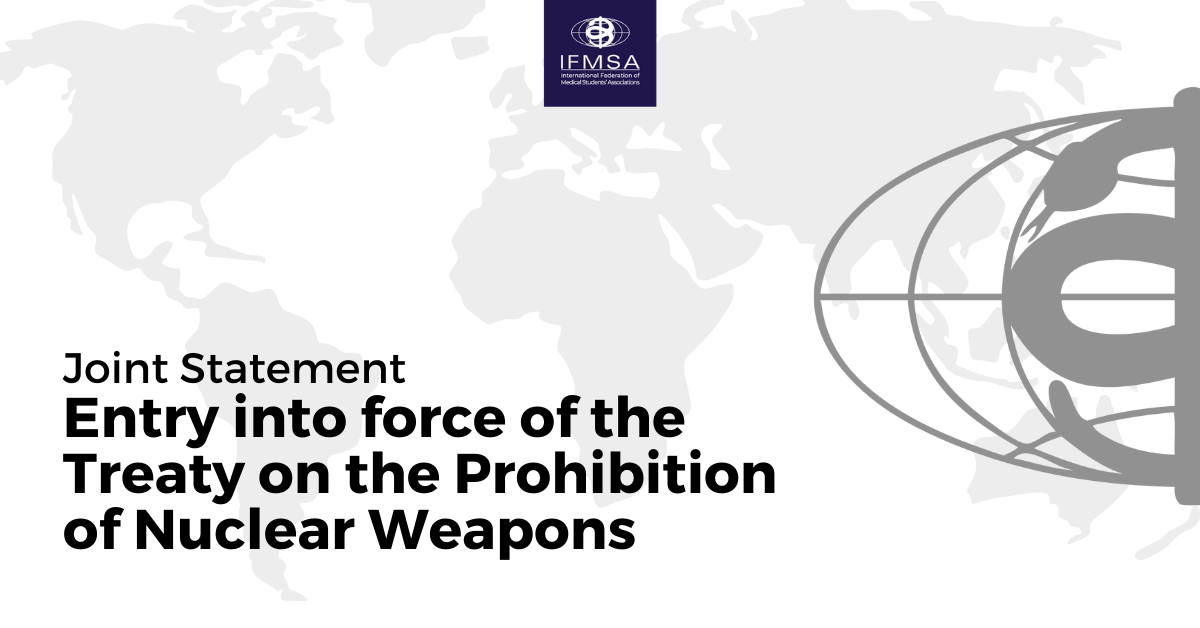 On the eve of the historic Treaty on the Prohibition of Nuclear Weapons (TPNW) entering into force, we celebrate this essential step towards preventing the catastrophic humanitarian consequences of the use of nuclear weapons and a big win for planetary health.

We are pleased and proud to have contributed our expertise and recommendations to the development of a strong ban treaty, based firmly in evidence of the unspeakable suffering and radioactive devastation that the use of nuclear weapons unleash. We know that any use of nuclear weapons would cause insurmountable challenges for providing medical care and other humanitarian assistance to survivors and that adequate response capacities do not exist at national and international levels. We must prevent what we cannot cure.

The treaty now becomes part of international law, binding on the states that ratify it. The TPNW establishes a new international legal standard against these most inhumane weapons.

Prohibition has demonstrated its efficacy in disarmament.  The treaties banning biological and chemical weapons, antipersonnel landmines and cluster munitions have all stigmatized and reduced the deployment and use of those weapons, influencing even nations which haven’t joined the respective treaties. The TPNW is already starting to have effect. We are pleased to see that in response to the TPNW, a growing number of banks, pension funds and insurance companies around the world are divesting from companies that build nuclear weapons.

The World Health Organization in 1983 identified nuclear weapons as “the greatest immediate threat to the health and welfare of mankind”, and concluded that “health services in the world could not alleviate the situation in any significant way. Therefore, the only approach to the treatment of health effects of nuclear warfare is primary prevention, that is, the prevention of nuclear war.”

Experts now assess that the danger of nuclear war is as great as it was during the Cold War and continues to grow. In recent years, hard-won treaties eliminating and controlling nuclear weapons have been abrogated. Nuclear-armed states are making long-term investments in new increasingly sophisticated and potentially more destructive nuclear weapons.

Increasing armed conflict in a climate-stressed world increases the danger of nuclear war, as does the vulnerability of nuclear command and control systems to cyberattack. Climate research tells us that even a limited nuclear war, involving less than 2% of the global nuclear arsenal, would loft millions of tons of smoke from burning cities high into the atmosphere and spread worldwide, abruptly cooling the earth to ice age temperatures, causing global nuclear famine putting billions of people in jeopardy.

The TPNW provides a vital antidote and our best path forward.

Not only does the treaty provide a comprehensive and categorical prohibition of nuclear weapons, it also provides the first internationally agreed framework for a process by which all nations, with and without nuclear weapons, can fulfil their legal obligation to eliminate nuclear weapons.

The climate crisis and COVID-19 pandemic have brought into sharp relief the crucial need for timely international cooperation driven by evidence and expert warnings, to safeguard the health and security of people. Nuclear weapons are human-made, so the solution to the threat lies entirely within our hands.

Ending nuclear weapons before they end humankind and many other lifeforms is an urgent health and humanitarian imperative. The treaty is a crucial step towards the eradication of nuclear weapons and a planetary health good of the highest order. We urge all nations to seize the opportunity the treaty offers and sign, ratify and faithfully implement it.