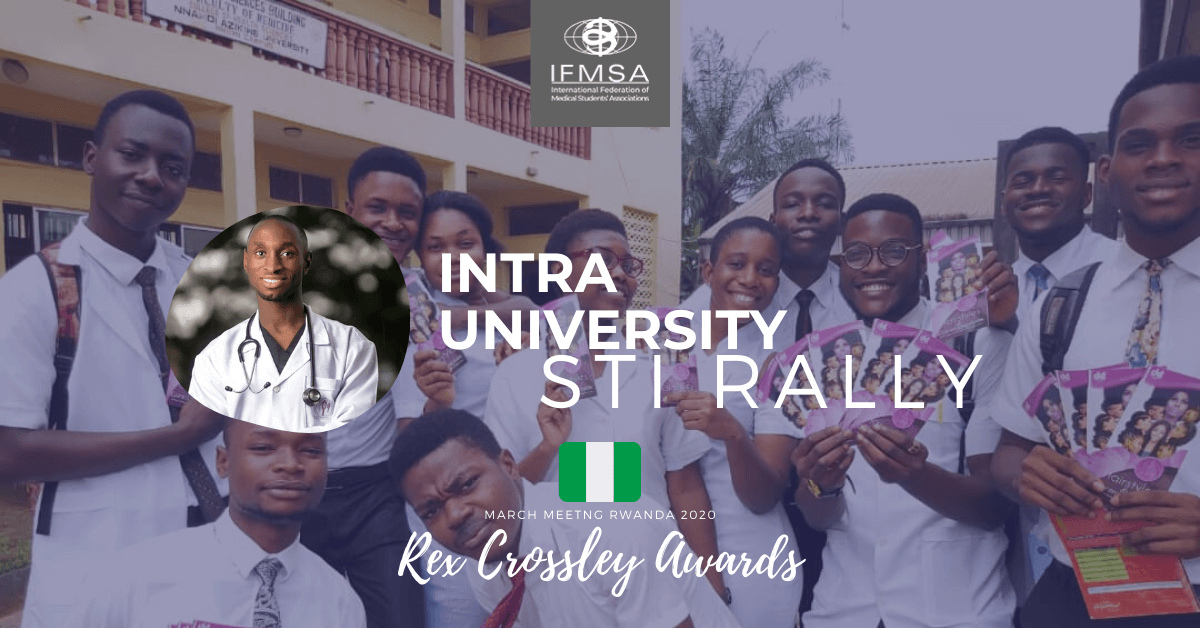 Knowledge about STIs other than HIV/AIDS is low in Nigeria and especially within the most vulnerable population which are undergraduate and Gonorrhea is the most prevalent STI in Nigeria. Therefore, We SCORAngels of the Nigerian Medical Students came up with this activity to give back to the community that has given a lot to us. The activity held in Twenty (20) University campuses in the country. Prior to the event, an online training session was held for all SCORA members to get them equipped for the activity. The event consisted of a walk by SCORAngels round their respective school campuses to educate fellow students on STIs.

In addition to the education of the students, condoms were also distributed amongst students provided courtesy of our foremost sponsor for the event, DKT International. Infographics were also made available and distributed. The goal was to reach out to at least 30,000 undergraduates, To educate each one about the meaning of STIs, the possible causes, consequences of these infections and how they can be prevented. Students were also to be encouraged to follow the WHO ABC protocol for the prevention of STIs. Also to give out 12,000 Condoms. After the activity, over 40,000 undergraduates were spoken to about STIs. 12,000 given condoms and infographics. About 2,000 undergraduates had further questions and wanted to keep in touch. Therefore the activity was a success

Information about the activity :

• The goals to be achieved by this activity is in summary the SDG3, Good Health and Wellbeing in this context Good Sexual reproductive and prevention of STIs and focusing on the Healthy sexual Choices
• The goal was to reach out to at least 30,000 undergraduates
• To educate each one about on the meaning of STIs, the possible causes, consequences of these infections and how they can be prevented.
• Students were also to be encouraged to follow the WHO ABC protocol for prevention of STIs which are A – Abstinence B – Be Faithful C – Condom use
• Distribute infographic materials to Further educate them on safe sexual practices and STIs.
• To give out 12,000 Condoms and educate on how it helps reduce the spread of STI (sexually transmitted infections).
• To explain the different STIs such as HIV (Human Immunodeficiency Virus), chlamydia, genital herpes, genital warts, gonorrhea, hepatitis B, and syphilis.
• To enlighten them that one can get an STI through having sex — vaginal, anal, or oral and that Condoms reduce the risk of spreading sexually transmitted infections…
• These objectives are measurable as the outcome would be assessed based on the number of undergraduates that would be reached
• Partnership with an NGO focused on safe sexual practices and prevention was certain therefore our goal to give out 12,000 condoms was realistic.
• The idea for the 20 schools outreach was birthed to play our part as Medical Students towards the 2030 dream of achieving Sustainable developmental goals with a focus on Good Health and Well-being. (SDG 3).