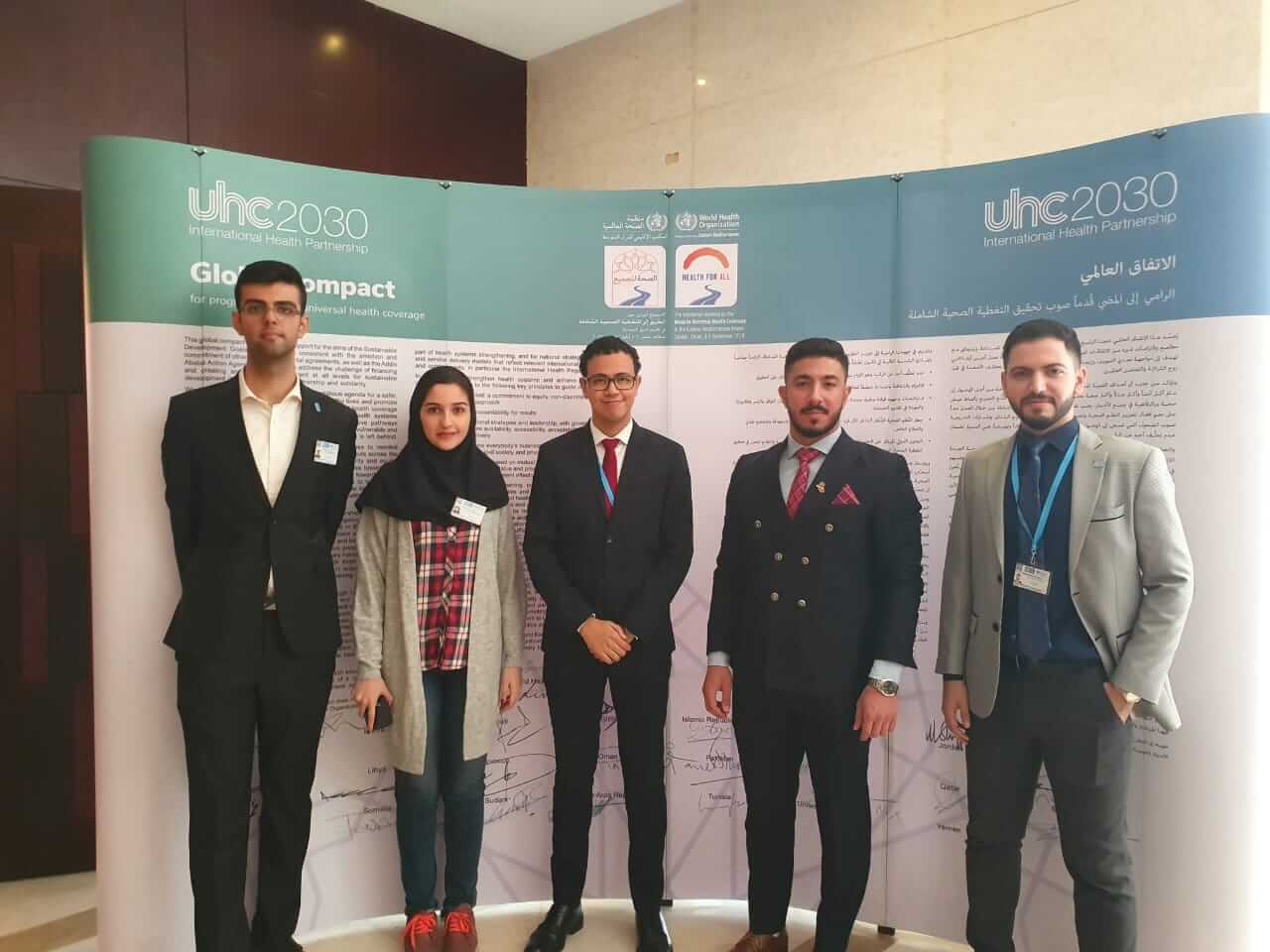 The regional Committee (RC) is the annual assembly in each of the 6 regions of WHO, where member states and non-state actors meet to discuss the regions’ health issues and also determine future plans and strategies. This year, the regional committee for the eastern Mediterranean region (EMR) took place in Tehran, Iran from 14th to 17th of October. Like previous years, IFMSA as a non-state actor and as one of the largest youth organizations collaborating  with the WHO had the privilege to attend this event with a delegation consisted of Aamr Hammani RD EMR and the head of delegation, Ali Amirkafi and Kosar Abouhamzeh from IMSA-Iran, Jafar Taslimi and Abdullah Al-khafajy from IFMSA-Iraq.

Before the start of the main event, pre-RC was held on Monday 14th and it started with a refreshing “walk and talk event” in Enqelab sports complex with presence of Dr Al-Mandhari, WHO regional director, Dr Namaki, Iran’s minister of health and other important political and sport figures of Iran with the aim of promoting a healthy lifestyle and advocate for the need of more physical activity in the region. Afterwards, the event continued in the main venue, Parsian Azadi hotel, with sessions on pharmaceutical financing, vaccine action plan, family medicine and water sanitation in health care environments.

On the next day, October 15th, the opening ceremony was held in Iran International Conference Center with the presence of Iran’s president, Dr. Hassan Rouhani, and the director general of WHO, Dr. Tedros Adhanom Ghebreyesus, which was the debut of this year’s regional committee. Both the director general and the regional director emphasized on the long way forward for achieving universal health coverage in the region and the challenges on the way, by addressing the main message: “health for all, by all”. Furthermore, Iran’s President and the minister of health reported on the progress made in Iran during the recent years and the strengths of the healthcare system in Iran. After the ceremony, main sessions started by adopting regional director’s annual report on polio eradication, health and climate change, scaling up mental health, antimicrobial resistance and cancer prevention and control which also lead to emphasize on national action plans for health security and PHC implementation.

On the following day, technical papers and region’s main health issues were discussed such as:

Representatives from countries in the region expressed their perspectives and efforts towards reaching the goals and Also non-state actors contributed to the discussions by sharing their concerns, perspectives and pledging their efforts.  Also it was decided that the next regional committee meeting will be held in regional office in Egypt.

Our delegation was very active in creating external connections for the region. We arranged several meetings with the WHO regional office department directors, representatives of countries and other non-state actors as well. This was done in order to improve our collaborations inside the region and also create new opportunities for our NMOs in reaching meaningful youth participation.

The 66th session of the regional committee came to an end on October 17th by adopting the reports, resolutions and decisions for the future of our region and focusing on the necessary need to continue and to strengthen our health systems, health workers and financial stability of health system in order to accomplish Universal Health Coverage and Sustainable Development Goals in the near future.

Despite facing many challenges, the overall health in the region is improving. Although admirable efforts have been made in decreasing NCDs, cancers, maternal and newborn death, involvement of all stakeholders is necessary to maintain the current achievements and attain the planned goals. With Health for all, by all, the future of the region is bright.