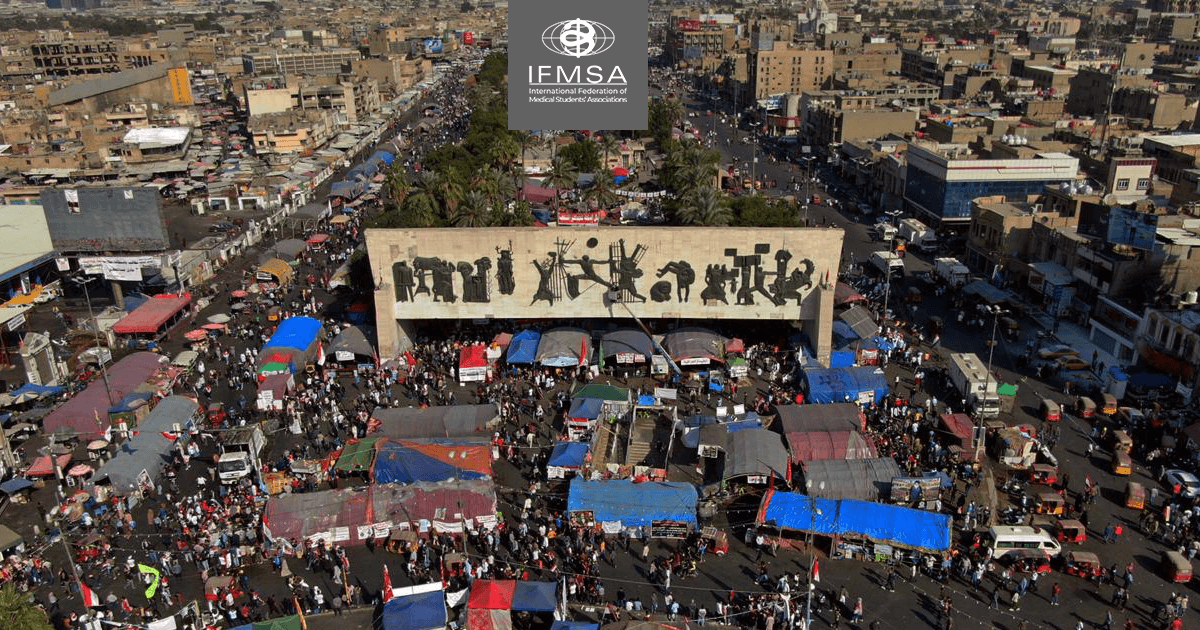 Ongoing nationwide protests in many cities and governorates of Iraq have claimed the lives of hundreds of protesters and kept thousands injured so far. [1] The protests started at the beginning of October when Iraqi youth and civilians flooded the streets demanding improved fundamental services, job opportunities in response to the high unemployment rate, an end to corruption and reliable accountability measures. [2]

Throughout the past two months, protesters have been met with water cannons, tear gas, deadly use of firearms and rubber bullets wounding thousands of protestors. Attacks on ambulances were also reported. [1][3]

Hundreds of medical students have joined the students’ strike, as well as students from all levels, from high schoolers to postgraduates. [1] A medical student was severely injured by a tear gas grenade, while he was providing aid for injured protesters.

The UN Assistance Mission for Iraq (UNAMI) has reported on arbitrary arrests, unlawful detentions and abductions including the abduction of one paramedic volunteers. [1]

On October 10, the Independent High Commission for Human Rights of Iraq said at least 923 protesters were detained but have since released at least 666. Eye witness and Human Rights Watch reports have also indicated an interference with the media reporting on the events and blockage of internet services for prolonged periods of time. [6]

According to recent sources, on the night of November 28th, at least 45 protesters were shot dead after storming and torching an Iranian consulate in Najaf. While on that same night, at least 29 people died in the southern city of Nassiriya when demonstrators who blocked a bridge were opened fire at. [5]

IFMSA believes that this fundamental human right should never be compromised. Regarding the several waves of uprisings taking over Iraq, IFMSA expresses our concern on the intentional use of lethal weapons against protestors which resulted in the rapidly escalating numbers of death. We strongly condemn the unproportional usage of violence in response to the protesters and firmly stress that healthcare workers and aid providers should not be a target. We call upon all parties to abide by the International Human Rights Law, as it is the bottom line to respect and protect the rights of civilians, including the right to peaceful assembly, freedom of expression and the right to freely seek, provide and receive information be it through the internet or other media sources.