International Day for the Elimination of Violence Against Women and Girls: Generation Equality stands Against Rape

Home / International Day for the Elimination of Violence Against Women and Girls: Generation Equality stands Against Rape 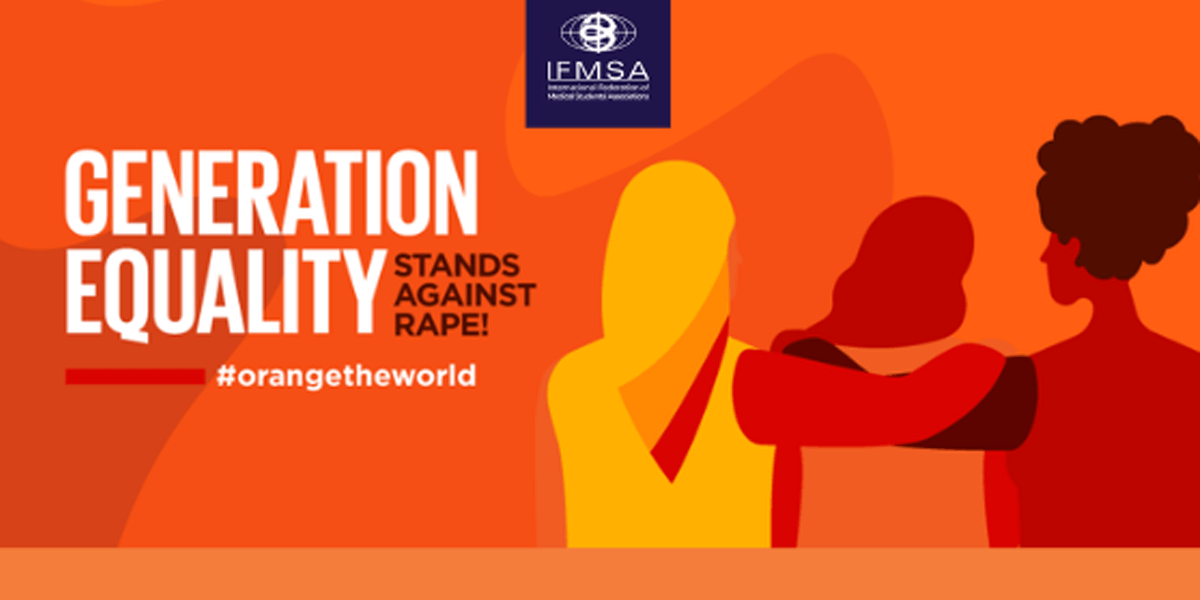 On the 25th of November which marks the International Day for the Elimination of Violence Against Women and Girls (IDEVAW) IFMSA stands once more next to several other institutions, organisations, social and civil movements to campaign against gender-based violence. Since 1981, this day was agreed upon to honour Mirabal sisters, three political activists from the Dominican Republic who were brutally murdered in 1960 by order of the country’s ruler, Rafael Trujillo (1930-1961).

1 in 3 women and girls experience physical or sexual violence in their lifetime, most frequently by an intimate partner and only 52% of women married or in a union freely make their own decisions about sexual relations, contraceptive use and health care. (1)Violence against women (VAW) is still one of the most persistent and devastating human rights violations which knows no boundaries of geography and affects women and girls regardless of age, ethnicity or socio-economic status. It is as serious a cause of death and incapacity among women of reproductive age as cancer, and a greater cause of ill health than traffic accidents and malaria combined. (1)

Violence Against Women is manifested in physical, sexual and psychological forms including:

Rape as a very blatant form of sexual violence perpetuated against women is the result of a culture of toxic masculinity and patriarchal beliefs, power and control that continues to create a social environment in which sexual violence is normalized and accepted. Furthermore, behaviours such as victim blaming, sexual objectification, trivializing rape and stigma towards survivors magnifies an attitude of silence and lack of reporting towards rape crimes and continues to muffle the voices of rape victims.

Throughout history, rape has also been used as a weapon of war in Bosnia and Herzegovina ,Rwanda , Syria and in many other conflicts. UN Action Against Sexual Violence in Conflict asserts that “Rape committed during war is often intended to terrorize the population, break up families, destroy communities, and, in some instances, change the ethnic makeup of the next generation.” Under international law, conflict-related sexual violence are characterised as war crimes and crimes against humanity. It is preventable and punishable.

Gender-Based Violence is a matter of high concern to the communities and the society as a whole, which cannot be kept within the confinements of the home or family entity. It must be addressed and eliminated in order to benefit the health and wellbeing of individuals and communities globally.Comprehensive Education of both boys and girls against traditional gender roles and the normalization of violence is an important step for the prevention of sexual and gender based violence. Another essential step is consent education and ensuring that the absence of consent is the central component of the definition of the incriminated acts of sexual abuse in national legilisations.

Through words, actions and inactions; discriminatory laws or leniency towards perpetrators; through the media we consume, jokes we laugh at, and attitudes we do not question, we become part of a culture that allows violence to continue.

Let’s all stand together against all forms of violence, for a world where no one is left behind.

VAW def:  any act of gender-based violence that results in, or is likely to result in, physical, sexual or psychological harm or suffering to women, including threats of such acts, coercion or arbitrary deprivation of liberty, whether occurring in public or in private life
Rape def: The penetration, no matter how slight, of the vagina or anus with any body part or object, or oral penetration by a sex organ of another person, without the consent of the victim