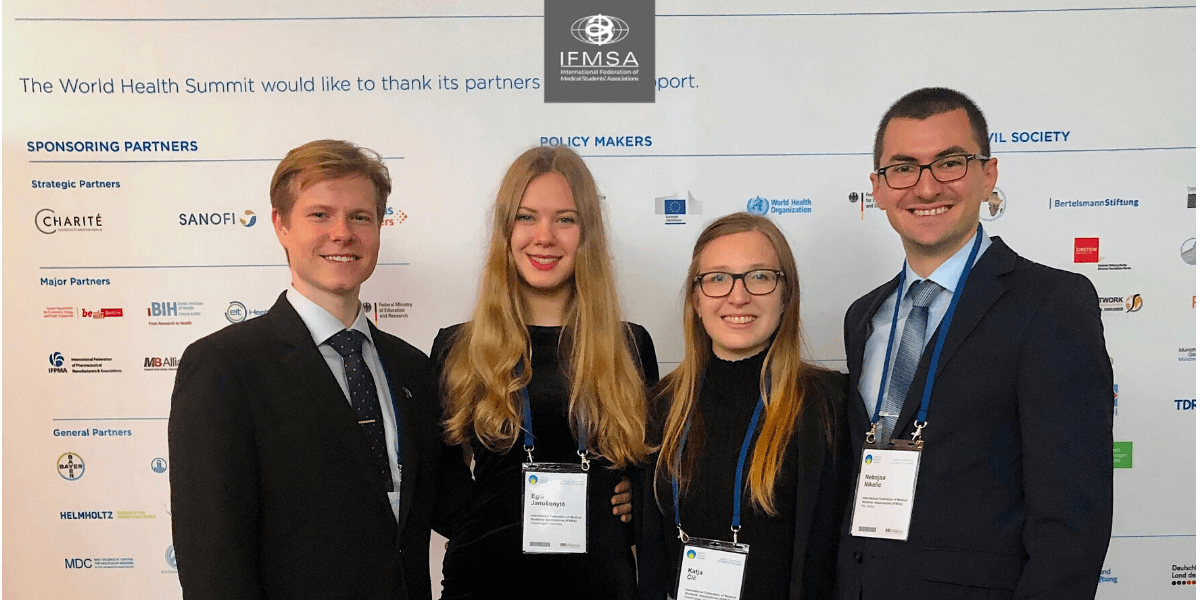 IFMSA attended the World Health Summit 2019 that was held in Berlin, Germany from the 27th to the 29th of October 2019. The World Health Summit is an annual event, launched for the first time in 2009, which brings together stakeholders from multiple different areas to participate in an open dialogue on the most pressing global health issues. This year’s event was the 10th of its kind and it brought together more than 2300 participants from all around the world. The World Health Summit is held under the High Patronage of Angela Merkel, Chancellor of the Federal Republic of Germany, Emmanuel Macron, President of the French Republic, and Jean-Claude Juncker, President of the European Commission.

IFMSA was represented by a delegation comprised of:

The meeting was an excellent opportunity for IFMSA to get in touch with relevant stakeholders, reconnect with partners as well as encounter new potential collaborators. The IFMSA delegation has networked with participants, many of whom were representatives of youth organizations, and acquired more profound knowledge about new developments in the global health arena.

The World Health Summit 2019 was attended by many high profile global health influencers who announced several upcoming opportunities that IFMSA will be exploring in the near future.

The main sessions of the meeting were connected with a common thread – Universal Health Coverage, focusing on the follow-up of this September’s UN High-Level Meeting. Moreover, a recurring topics of the event’s sessions were Antimicrobial Resistance and Climate Change, each with their own stream, as well as Gender Equality and Sexual and Reproductive Health and Rights, including a panel within the Global Health Workforce, where the Global Health Workforce Network Youth Hub, which IFMSA is a part of, was presented. Delegates attended the high-level panel discussion on Transforming Human Capital about the future of health workforce, and a keynote event “Health is a Political Choice” with an address from WHO Director-General dr. Tedros Adhanom Ghebreyesus.

WHS 2019 was a great start to IFMSA’s external representation in the term 2019/20 and set the bar for global health progress towards achieving Sustainable Development Goals and the 2030 Agenda through global efforts and meaningful partnerships.