Attacks on Healthcare Continue in India 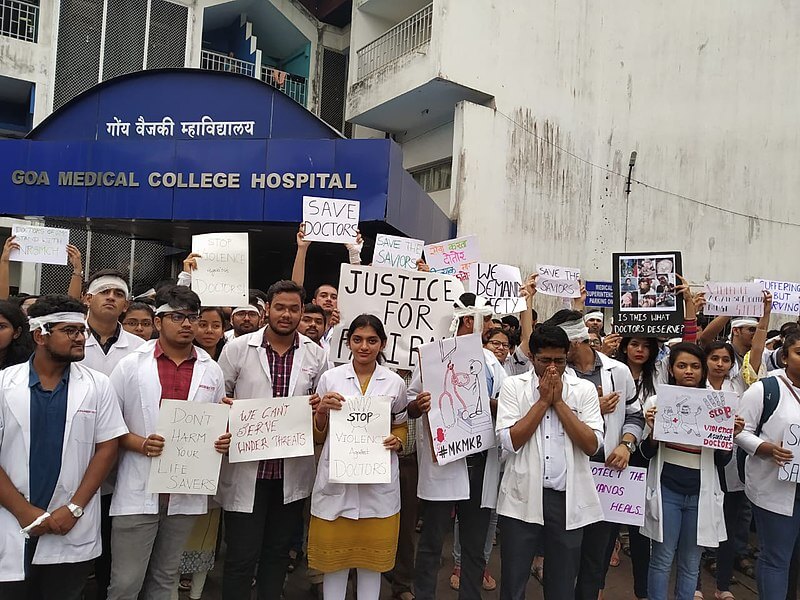 On the night of 10th June 2019, a 75 yr old patient passed away at the Nil Ratan Sircar Medical College and Hospital (NRSMCH) in Kolkata, India. Soon after, family members of the deceased reached the hospital and clashed with the junior doctors on duty. The violent clashes turned the hospital premises into a battleground on the night of the patient’s death and the morning after, as doctors claimed that over 200 people landed up at the facility.

The attacks by the patient’s family left doctors of the state-run facility severely injured in the violent clashes. Paribaha Mukhopadhyay, one of the doctors attacked, suffered a depressed skull fracture when a brick hurled by the protesters hit his head, and Dr. Yash Tejkwani suffered a rib fracture and spine injury.

Highlighting the numerous attacks that healthcare workers face, this incident stirred nationwide peaceful protests by doctors in India demanding safety and security at workplace. Hospitals throughout the country were shut while emergency services remained functional.

Despite that, recently, on Sept. 2, 2019, tea workers in Assam attacked Dr. Deven Dutta, after the death of a co-worker at the hospital. Twenty-one people who were part of a 250-strong mob that attacked the hospital and the attack led to the sad demise of Dr. Deven Dutta, who was a 75-year-old physician who had volunteered his services to help the community after his retirement.

Dr. Dutta was dragged, kicked, slapped and punched by a mob at a tea estate and was even cut with shards of glass by the attackers, many of them tea workers who were allegedly furious that he was not in the estate hospital when a colleague died.

IFMSA recognizes that attacks on healthcare and disruption in healthcare services restrictaccess to health care and is, therefore, a violation of human rights. To advance the protection of health services and civilians, and reach better health for all, there is a broad range of concrete actions to be taken by a number of different actors.

The health sector and medical schools to: